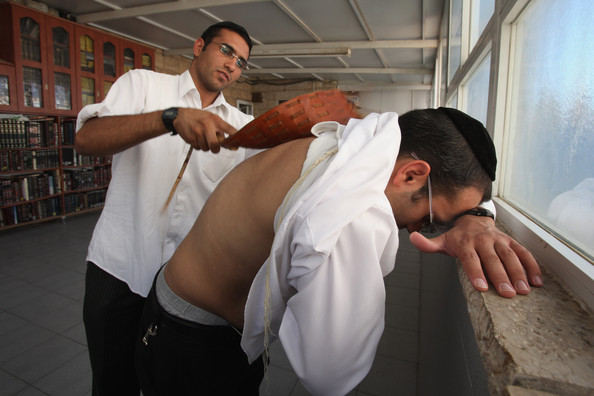 Ok, I’ve never heard of religious Jews getting themselves whipped, even if only a little symbolic bit, for Yom Kippur. You can see some pictures here. I’m going to go out on a limb here and say that I find them both odd and rather intimate. Every year you learn something new. I’m not really sure what to think. Not for me, thank you, but why not for them? I guess it goes to show that you can’t really say “Jews don’t do that” because there’s nothing that someone won’t do. I’m confused though. Why doesn’t this get talked about much among academics? All the things that are supposed to interest us are here: embodiment, discipline and punishment, performance, male on male homo-sociality.

Zachary Braiterman is Professor of Religion in the Department of Religion at Syracuse University. His specialization is modern Jewish thought and philosophical aesthetics. http://religion.syr.edu
View all posts by zjb →
This entry was posted in uncategorized and tagged body, gender, Judaism, religion, Shabbat & holidays. Bookmark the permalink.