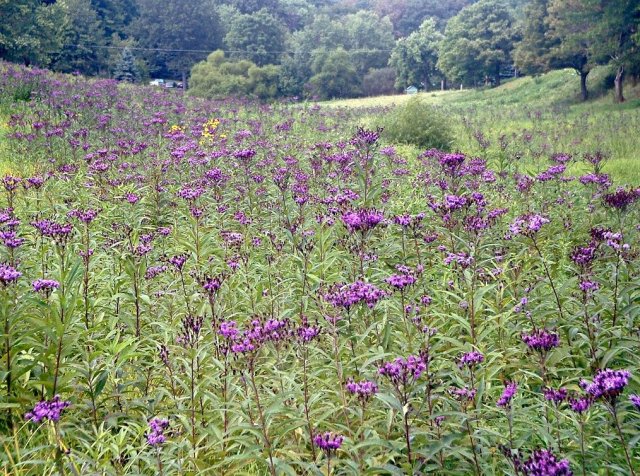 The highlight of this morning’s drive up to Syracuse was a Terrence Riley’s “In C,” a pioneering work in 1960s musical minimalism. “In C” starts off with a simple “pulse” beat, which builds up into layers. I’m not really sure how it works. I don’t have the musical intelligence. What I understand it that it starts by banging out a C-chord “pulse” on a piano, and then layers it up with 53 separate scored figures or musical in pace with the pulse. All players in the ensemble play all 53 modules, in pace with the pulse but at their own determined rate. The piece is over when each musician as completed the 53 modules (I’m getting this from the CD notes and from Wikipedia). Recordings by Philip Glass and Bang on a Can are soft and quiet. In the so-called original recording , the music is urgent, portentious, prophetic. Like revelation, “something happens.” And then it stops, banging out the same C chords, as simple as it started. And then you listen to nothing. Purple flowers caught eye on the side of the road. I think they were New York Ironweed  Not persuaded by the news about automated, driverless cars on Diane Rehm today or here online at the Atlantic.

Zachary Braiterman is Professor of Religion in the Department of Religion at Syracuse University. His specialization is modern Jewish thought and philosophical aesthetics. http://religion.syr.edu
View all posts by zjb →
This entry was posted in uncategorized and tagged in-the-car, parks & gardens, technology. Bookmark the permalink.