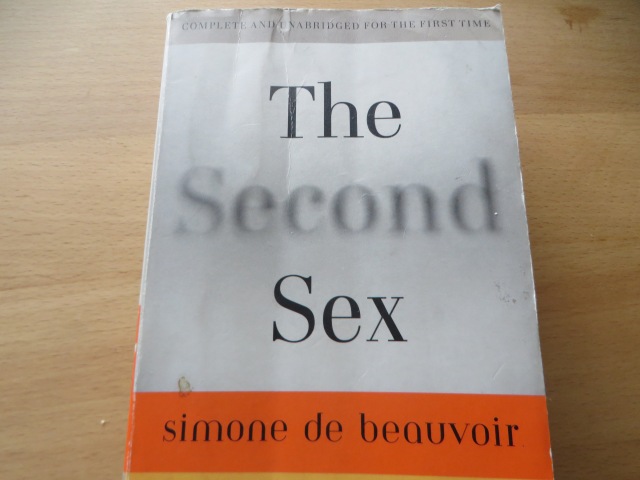 Regarding De Beauvoir’s classic The Second Sex one could easily quote the old rabbinic adage about Torah, “Turn it, and turn it, for everything is in it. Reflect on it and grow old and gray with it. Don’t turn from it, for nothing is better than it” (Pirkei Avot 5:22). Everything is in The Second Sex, including literature, religion, film, anthropology, psychoanalysis, philosophy, already anticipating every move in feminist theory that was to follow her (social construction of reality, performativity, material feminism, affect theory). With and against the grain of de Beauvoir’s text, what I’ll do here is only cover ground most directly related to religion, in particular so-called women’s religion, also in relation to the bourgeoisie. I don’t know if this has already been observed by others. I’m not up on the scholarly literature. My own reading is naïve. But the more I prepare this post, the more surprised I find myself.

Just how important is religion for de Beauvoir, not just as a social critic but as a philosopher? The main lines of argument against religion are by now well known. Religion is a force subordinating women in society, upholding their passivity as a social virtue and spiritual good, offering women compensatory illusion and sexual substitution, a field of unreal relations instead of concrete political action, the confusion and alienation of sexual love as spiritual love. De Beauvoir sees through the glory, dazzle and domination of the Catholic mystical tradition. Viewed through a strict Sartrean lens, religion stands out as the quintessence of unfree and inauthentic bad faith, the problem being its stake in immanence and the imagination.

And that’s where the analysis gets interesting, with the imagination. If the argument about bad faith were the end of it, The Second Sex would have made important critical points about religion; which would have made her analysis only a more or less useful tool with which to understand religion. In fact, de Beauvoir paints a picture of religion with far more nuance, more steeped as it is in bourgeois French Catholic tradition and categories than a quick surface impression would otherwise suggest. Rejecting religion, her own thought reflects upon it deeply. She rejects religion for reasons that should be of profound interest to scholars and students of religion and gender.

As she herself understands it, an alternative analysis of the intersection of religion and gender starts not simply with patriarchy, but with nature. The “intense joys” a girl can know with “a familiar landscape” are referred to by de Beauvoir in terms of “communion.” The girl throws herself “passionately into things because she is not yet mutilated in her transcendence.” In taking possession of the whole universe as her kingdom, she takes possession of herself (p.374). Communion and kingdom are already religious categories. But in what way does religion relate to nature as kingdom? Does the subject view nature from without in an attitude of free transcendence, domination and possession or from within as a relation of saturated and subjugated immanence?

While de Beauvoir rejects the doctrine of immersion, no one has described the kind of magical thinking better than she. Anticipating the rhetoric in contemporary Affect Theory, the young woman appears as a subject who “feels surrounded by waves, radiation, fluid; she believe in telepathy, astrology, divination, Mesmer’s baquet, theosophy, table turning, mind readers, and healers; she introduces primitive superstitions into religion –candles, ex-votos, and  such—she embodies ancient spirits of nature in the saints –this one protects travelers, that one women who have just given birth, another one finds lost object—and of course no marvel surprised her. Her attitude will be that of conjuration and prayer; to obtain a certain result, she will follow certain time-tested rites. It is easy to understand why she is ruled by routing; time has no dimension of novelty for her, it is not a creative spring; because she is doomed to repetition, she does not see in the future anything but a duplication  of the past, [etc.]” (pp.639-40).

Placed squarely in fin de siècle European spiritualism, the religion identified by the critic of religion with such precision is the flip side of patriarchal religion, dominating religion, the religion of reason. What we’re given to see is popular religion, folk religion, domestic religion; let’s call it women’s religion. De Beauvoir captures in this type of religion the circular sense of time as season, rhythm, cycle, the sense of repetition as the destructive power which religion seeks to hold in abeyance. With her own governing assumption that there subsists a real truth only in action and concrete projects, de Beauvoir describes religion as “no different from a dream.” In religion, a woman “struggles only by means of images and words: and that is why she accepts the most contradictory assertions without a problem.” And yet, in ways that might surely remind one of the Babylonian Talmud, “she does not care about clarifying the mysteries of a sphere, which in any case is beyond her scope” (p.640). About this relation between women’s religion and the subaltern patriarchy of the rabbis, there’s  no little irony.

While broader in scope, The Second Sex reads not entirely unlike William James’ Varieties of Religious Experience. Again from a flip side, women’s religion, or popular religion, or whatever you want to call it reflects the undercurrent magic that de Beauvoir understands to have been suppressed by elite Christian religion –or more to the point, the modern bourgeois Christian culture in which de Beauvoir grew up in France. Immersed in its social atmosphere, de Beauvoir writes about that form of Christian religion with an intimacy with which many critics of religion born after the Second World War are unfamiliar. It would seem not at all incidental that religion should in this way assume such a powerful presence in the very important and even defining chapter “Woman’s Situation and Character” (chapter 10). Representing critical moment in The Second Sex, it is the last chapter of part 2 (Situation) of volume 2 (Lived Experience). That is to say, that de Beauvoir has conveyed if not captured a sense of women’s religion as lived experience, as lived experience in the imagination.

As imagination, in de Beauvoir’s analysis, what religion stakes out is the modal form of possibility. About this, she is intensely critical. Regarding “the woman,” de Beauvoir writes about how the “flow of things seems inevitable to her, and yet anything can happen; she has difficulty differentiating the possible and impossible, she is ready to believe anyone; she welcomes and spreads rumors, she sets off panics.” “[E]ven in calm periods she lives in worry” concerning an opaque future haunted by “phantoms of war, revolution, famine, and misery; not being able to act, she worries.” De Beauvoir’s conclusion is that “in imagination all possibilities are equally real (p. 645). The woman’s “situation and character” are described as enclosed and unreal (p.656), a characteristic that is not just confined to women, which also captures the situation of bourgeois men (p.661).

A critical reading suggests that De Beauvoir gives insufficient credit to this kind of religious experience, this kind of religion imagination in which fear and love are central drivers. What de Beauvoir marks in women’s religion as false might make be fundamentally sound. Imagination works by always anticipating one possibility in relation to another, one possibility in relation to its opposite. On the one hand, there’s fear. Would it not be the height of foolishness not to reflect upon the trepidation that possibility provokes as a form of fear as the beginning of wisdom? This is the possibility of social critique. Is not the intentional object of such anxiety a world that is truly damaged by the ever present reality of human suffering? On the other hand, there’s the possibility of genuine love. This is the possibility  of human solidarity, the very love upon which de Beauvoir reflects without a scintilla of criticism.

At an odd moment in the text, religion is identified by de Beauvoir as a phenomenon that speaks not just to control, fear and panic but to the possibility of sexual love. Writing in the chapter on “Sexual Initiation,” she evokes the sensuality of skin and hand, virility and seduction, the young girl and the handsome adolescent. The key turns out to be taken from, of all places, the Song of Songs. The love there she is described by de Beauvoir in terms of “a symmetry between the delights of the wife and those of the husband” as well as “earthly fauna and flora, precious stones, streams, and stars.” The real concern is not about the picture but about the sad fact that the young woman “does not have the means to take these treasures” (p.389). But the biblical text in all its earthiness will have anticipated by way of prefiguring the ideal of what de Beauvoir will consider towards the end of The Second Sex to be authentic love based on non-mutilating mutuality, the “recognition of two freedoms,” the “revelation of self through the gift of self,” and the “miracle” of sexual division all of which together constitute the true telos of The Second Sex (pp.694, 706, 754, 766).

About reading The Second for Sex for insight about Judaism, that most bourgeois form of religion, I would suggest finding it here in this description of what we’re calling women’s religion as steeped in little things and frivolous things, as a form of consolation, a sense for the possible but also waiting, enclosed in the limbo of immanence and contingency (pp. 644, 645, 649). I realize of course that de Beauvoir is not writing about Judaism, but cannot but help consider that this kind of description is an odd, perfect match with Jewish religion, especially the religion of the Babylonian Talmud.

One last word, this one about bourgeois women, concerning whom de Beauvoir has a surprising thing to say at the intersection of dreams and reality. Compared to bourgeois men and upper class or aristocratic women, it turns out that bourgeois women exercise “a greater purchase on reality.” His reason is abstract, whereas hers is concerned with tangible things like children, clean laundry, and the roast. To these she brings “experience, limited but concrete” that signal a more keen attention to the world, “the spectacle” of the street and sky, and to her own life’s singularity. As described by de Beauvoir, this form of bourgeois imagination is “full of sympathy.” With age it is only complemented by irony and cynicism. In opposition to “masculine mystifications,” the bourgeois woman is said to have an eye for the “contingent, absurd, gratuitous reverse side of the imposing structure built by males” (pp.662-3).

Zachary Braiterman is Professor of Religion in the Department of Religion at Syracuse University. His specialization is modern Jewish thought and philosophical aesthetics. http://religion.syr.edu
View all posts by zjb →
This entry was posted in uncategorized and tagged de Beauvoir, gender, religion. Bookmark the permalink.