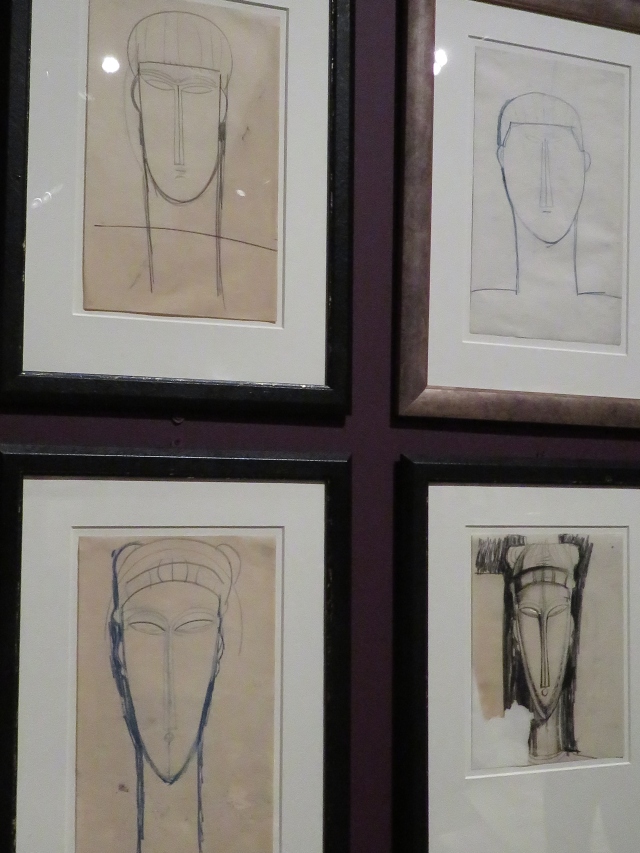 Mostly drawings, Modigliani Unmasked at the Jewish Museum has come and gone. I was not entirely persuaded by curator Mason Klein’s emphasis on identity, both the artist’s own hybrid Jewish identity (Italian-French, Sephardi), race, with the idea of “primitivism” hovering right there, not in the background, but directly in front of you. None of the critics seem to have bought this line either. The Jewish identity component was and remains poorly established, and the argument about primitivism was relatively uninteresting, but there might be more to both than that, after all.

Avoiding the wall texts, I was primarily drawn to the visual quality of the drawings while struggling with a language with which to understand them and the impressions they make.  If I were to try to find that language, it would be to note the lively and gentle character of the female nude. Unlike the artist’s more famous painted portraits, the drawn figures do not look out to meet the gaze of the viewer. If anything, they are what the art critic Michael Fried might have called non-theatrical. At once erotic and non-sexual, they are self-absorbed, inhabiting a world of quiet contemplation and “emotional intelligence,” which I now begin to think might be the key term for understanding Modigliani’s entire oeuvre.

Still looking for a better set of words, I found an excellent review by Thomas Micchelli at the always excellent Hyperallergic. I’m citing below what for me are the highpoints from the whole thing which you can read here.  Micchelli gets at the purity of the figures and draws a fine distinction between Modigliani’s fascination with first Egyptian and then African and other forms of indigenous art with the more famous example of Picasso. It’s in the comparison to Picasso’s Les Demoiselles d’Avignon, that Micchelli makes better sense of Mason Klein’s

What follows is Micchelli:

These limestone sculptures, roughly hewn from blocks stolen from construction sites, are miracles of formal variety within strict, symmetrical constraints. Pitted, unpolished, and gleaming, with their elongated noses sharpened into scythes, they are African, Cycladic, Romanesque, and otherworldly all at once, relics from another dimension and caricatures of the gods.

The dozens of drawings surrounding the limestone sculptures offer object lessons in the peaks and valleys of stylization: some of the heads, in their obsessive repetition of forms — the arched eyebrows sheltering blank, almond eyes; the impossibly long noses and puckered, button mouths — seem simultaneously analytical and spiritual, a platonic ideal rendered in pan-cultural terms, while others, less deeply considered and more quickly rendered, descend almost into doodles.

To my mind, this could explain the sense of purity running through Modigliani’s art, which stands in direct contradiction to the heterogeneity of his influences. It can be seen not as an abstract, formal distillation (as pursued by his friend Constantin Brancusi, which would belie Klein’s thesis), but rather, for lack of a better term, as the purity of thought — an almost visceral perception of emotional and intellectual purpose, a counterintuitive perspective that transforms formal devices into tools for self-disclosure, curiosity, and compassion.

To again quote [Mason] Klein, the difference between Modigliani’s worldview and Picasso’s adaption of Baule masks in his groundbreaking work, “Les Demoiselles d’Avignon” (1907), is that the latter’s sources led him to render the women in the brothel as African and, thus, in the prevailing view, as primitively sexual. Modigliani’s treatment of “primitive” art speaks to a different purpose, one bound up in his status as a Sephardic Jew. Indeed, among artists appropriating African art, it was Modigliani’s identification with his subject’s “otherness,” rather than a fascination with the exotic, that set him apart.

Modigliani never went the Cubist route of splitting his subjects into shards and facets; they were always whole and wholly human. He was an outsider who inhabited their interiors, who sought a common thread and found it.

Zachary Braiterman is Professor of Religion in the Department of Religion at Syracuse University. His specialization is modern Jewish thought and philosophical aesthetics. http://religion.syr.edu
View all posts by zjb →
This entry was posted in uncategorized and tagged art, gender, Modigliani, Museums & Galleries. Bookmark the permalink.