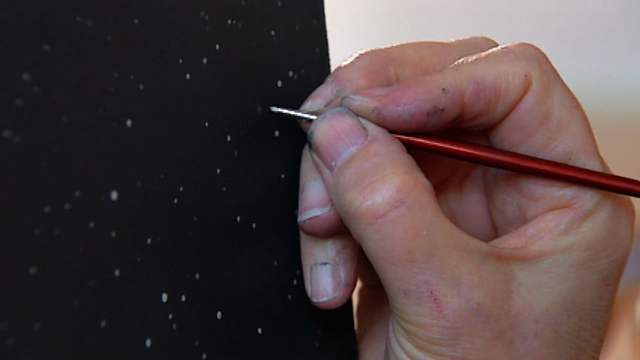 Getting back to work about my impressions about some exhibitions that have since come and gone, this one being Vija Celmins: To Fix the Image in Memory. Vija Celmins  (pronounced VEE-ya SELL-mins) is one of those artists, women, whose career took shape in the late 1970s and who are still active today. They are well-known to and much by artists and critics,

In her review here at the NYT, Roberta Smith speaks parallax quality of the work. This is the “precise, painstakingly wrought illusions of reality: expanses of ocean waves, star-studded night skies, clouds or the moon’s surface, rendered in graphite, charcoal or muted tones of oil paint. They can take years to make despite their often small size and seem so realistic as to be mistaken for photographs but they feel equally cosmic when they zero in on a bit of pebble-strewn desert, a spider’s web, a fragment of glazed porcelain or the inside of a shell, pocked with tiny craters.”

Chronologically as part of the artist’s career trajectory, the work starts small scale and intimate: an envelope, household objects, and then it begins to scale up, recalling war and destruction, being allusions to World War II, her family having fled from native Latvia in 1944 and moving to the States in 1948. In California, the art moves out, as it were, to sea and out into outer space, lunar surfaces, and then back to more terrestrial things like stones and delicate webs. The large and vast have been “distilled” into the very small. What I have not seen much of as I have begun to skim in the reviews and critical literature is the sense of the distance coldness preserved in the image.

What everyone notes is the smallness of the object-painting and the imperative of close looking. Here again, Smith writes, about the “different buzz [that] descends when you take a closer look — which the smallness invites. Depicted reality dissolves. Prolonged scrutiny brings awareness of the artist’s hand, the careful textures of her marks, and above all the discipline and concentration that produced them. They invite and reward reciprocal patience and concentration, slowing down perception so thoroughly that the show almost exists in its own time zone.

How does the image hold together? The wall texts will recall the elaborate construction of the image out of material stuff, the twenty layers of paint, applied, partially sanded off, reworked and reworked; and the blacks with burnt umbers, ultramarine blues, and shades of white and grey, circles filled with tiny drops of liquid rubber and then applied with color (wall text). What does the image do? Recalling to this reader-looker Derrida Truth in Painting, what matters is not the image itself, but the frame when Celmin states “Of course I like the image because it holds the rectangle so well, sort of maps it, accounts for all the space” (wall mount).

What makes this figurative work so abstract has to do, also with looking in closely. Here again is Celmin writing about her own paintings. “When you’re further away, you think, “O, yes, this is an image, and it’s a sky image.” And then you come up very close, and it becomes just dust…charcoal that has light in it, light and charcoal, light and the absence of it” (wall mount). As much as the art is given to the memory of an object world that it seeks to fix in the layers of memory, there is, at the same time, an evisceration of that object world as it gets lost in the close act of attentive looking.

About an image drawn out over time from and abstracted out of the natural world I can only crib from the contribution of Briony Fer to the exhibition catalogue. With reference to the western drawing traditions of Dürer and Ruskin, we are given to understand how, in close drawing, the object, even the most obdurate object like a stone, gives way to “a more inward and wayward vision” (Briony Fer, “Exercises in Abstraction” in Gary Garrels (ed.) Vija Celmins: To Fix the Image in Memory, 196). In what the artist called these “redescriptions,” Fer observes for us how the image is distanced from itself. As per Fer, this is an art that “delivers an image of the natural world without, in fact, being one, at least not in a straight forward sense.” This is an observational drawing that turns back on itself, mediated, layered, hyperbolic in the effect of detail. What is given in these “transcriptions” is not nature but a sense of close looking over time (195). What Fer calls the “anti-compositional [surface]” is made of “handmade marks, bedded down in compacted layers” (201). This then is abstraction achieved through its “apparent opposite.” In this analysis, instead of reducing the image to most elemental structure, abstraction works itself out in a “figuration that follows and maps out the surface.” Celmins paintings are a matter of “extreme illusionism,” “detailed rendering” and “brutal introspection” (197, 201).

I’m not entirely sure of what Fer means by anti-compositional. Certainly these paintings are anti-romantic. Subjective masters of the liquid arts, romantic poet and painters looked out from the very small to grasp and dissolve in the infinite and sentimental vastness. It lends itself to a different kind of looking, and a different kind of loss. By way of contrast, Celmin’s work is dust-like and microscopic. You can see it when you go up to look in closely, particular with works in which the watery or starry or web-like image is fixed in charcoal and graphite. The act of close looking, the pointing and hyperbolic attention to detail is crushing and even cruel, in this body of work and in life itself. The world is not what you think it is. This is not water. Those are not stars. These are powerful negations. They are nothing but dust and light, smudgy and bright. There is majesty in this alien vision, the haptic work of a careful hand.

Zachary Braiterman is Professor of Religion in the Department of Religion at Syracuse University. His specialization is modern Jewish thought and philosophical aesthetics. http://religion.syr.edu
View all posts by zjb →
This entry was posted in uncategorized and tagged art, image, Museums & Galleries, Vija Celmins. Bookmark the permalink.