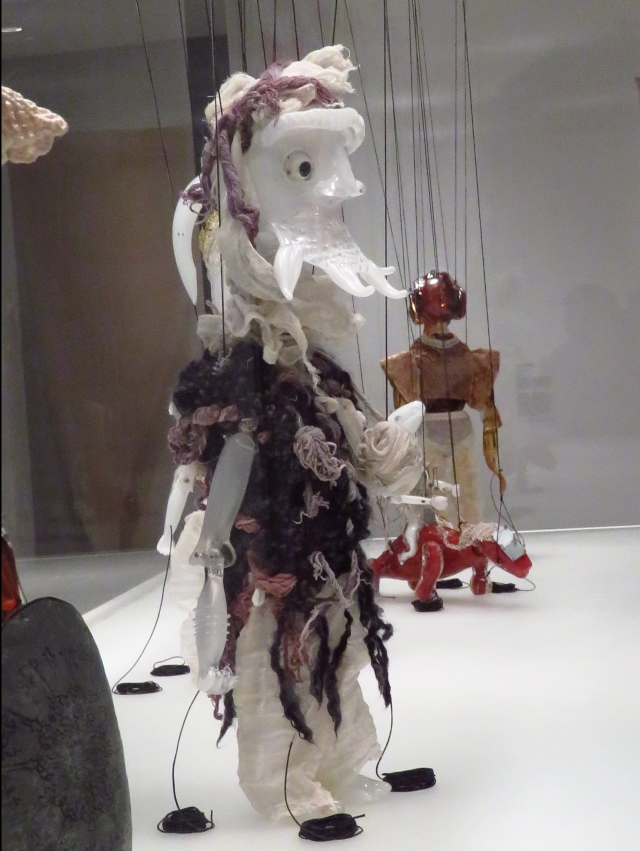 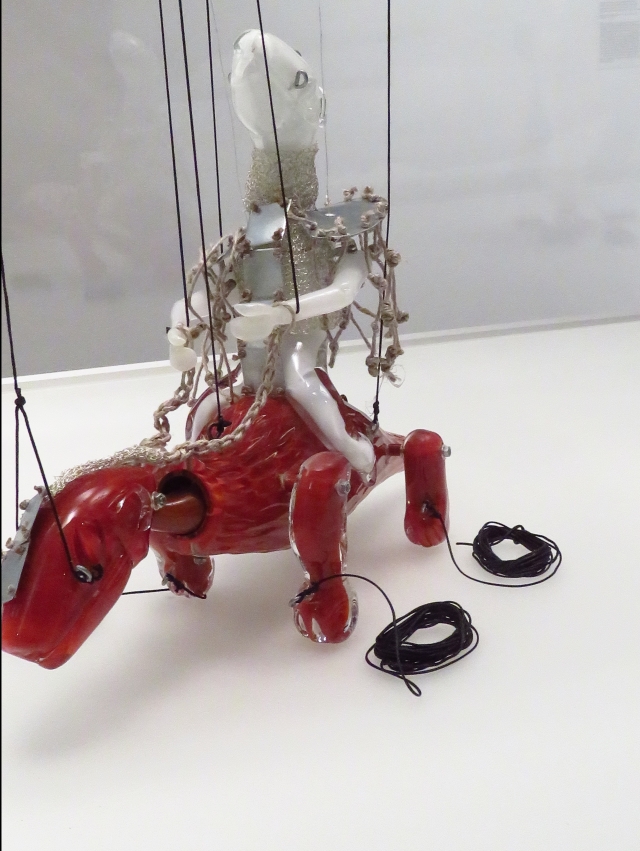 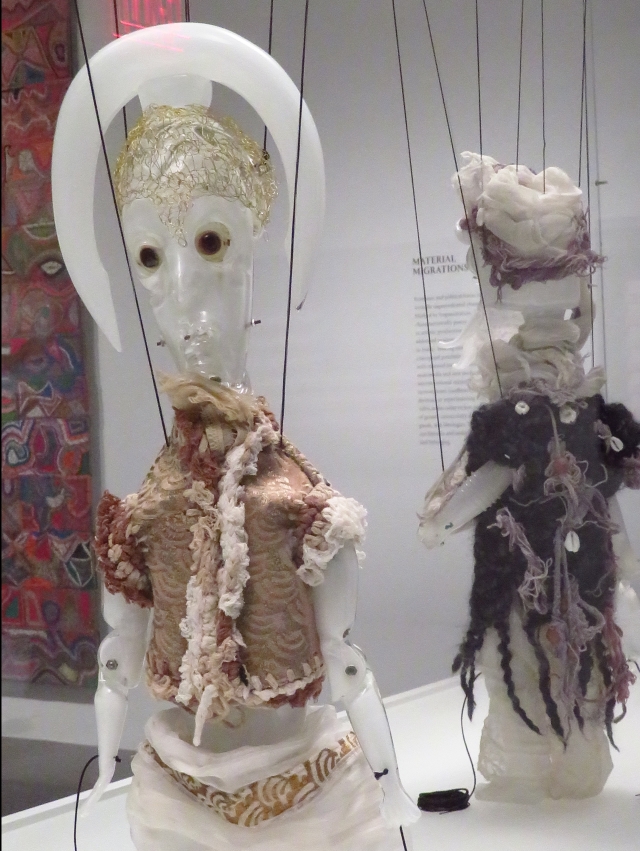 Puppets from Wael Shawky’s three-part video series Cabaret Crusades are here on view at the Met Breuer. I’m wondering about the relation between visual art and history (it could just as well be about religion and history) in a body of work like this. Does the super precise historical detailing that went into the narrative really matter or do they provide the pretextual platform upon which to move these figures across a semblance of time and place? After all, the historical verisimilitude of the narrative is at odds with the figures.

As if taken from a Star Wars bar, not from the medieval Middle East, these surreal creatures bring an odd quality to the violent animation to the historical epic, here being the clash between Muslim armies and Christian Crusaders. Here at the museum there is a triple displacement. They look exceptionally good close-up. The figures have been taken out of history, taken off the two dimensional video screen, and isolated in the vitrine. Now super-isolated from that “original” historical platform, the puppets have been transformed into sculptures that enjoy a three dimensional and richly saturated stand-alone presence around which the viewer can now walk.

Again, the act of keeping our own eye on material allows one to conclude that the semblance of history is meticulously constructed out of glass, fabric, enamel, metal, string, gauze, wood beads, and shells.

The trilogy consists of:

CABARET CRUSADES: THE SECRETS of KARBALA.

For greater context here below is the review here by Holland Cotter in the NYT of the exhibition four years ago at MoMA PS1.

The most vivid depictions of a war in the Middle East aren’t on television news these days. They’re in an exhibition by the Egyptian artist Wael Shawky at MoMA PS1 in Queens. The show, “Cabaret Crusades,” Mr. Shawky’s local museum solo debut, is made up of three sequential films, each about an hour and set in the distant past, beginning in the 11th century when European armies marched eastward to claim the Holy Land. The story is one of almost unremitting violence, and the scenes of battle, torture and execution are appalling to witness, which is a surprise considering that all the actors are marionettes.

Drawing on work by the Lebanese historian Amin Maalouf, Mr. Shawky tells the story of the Crusades through Arab eyes. Puppets may have been the only viable way to produce such an epic on a budget. The strategy works; they’re astonishingly expressive. In the first film, from 2010, he used antique Italian marionettes; for the second (2012), he designed the painted ceramic puppets himself, creating a menagerie of half-human, half-animal beings. For the most recent and final film, which takes the saga beyond the Crusades and into the origins of religious conflicts within Islam, he commissioned hand-blown glass puppets modeled on African sculptures.

The films have distinctive casts — each one looks utterly, wonderfully different — but are bound together by shared features: The dialogue is spoken in Arabic, and villains, not heroes, abound. Whether the focus is on Christians or Muslims, political treachery and physical cruelty are the order of the day. The full, brutal story may only be palatable as a doll-like fantasy, and with figures as charismatic as these. As if to acknowledge their allure, the exhibition’s organizers — Klaus Biesenbach, director of MoMA PS1, and Margaret Aldredge, a curatorial assistant — have placed all of the glass and ceramic puppets in two long glass cases. The result is a sculpture show that could easily stand on its own. But it’s the complete package that’s truly brilliant. Don’t miss it, and make time to see it all.

Zachary Braiterman is Professor of Religion in the Department of Religion at Syracuse University. His specialization is modern Jewish thought and philosophical aesthetics. http://religion.syr.edu
View all posts by zjb →
This entry was posted in uncategorized and tagged art, Islam, Museums & Galleries. Bookmark the permalink.