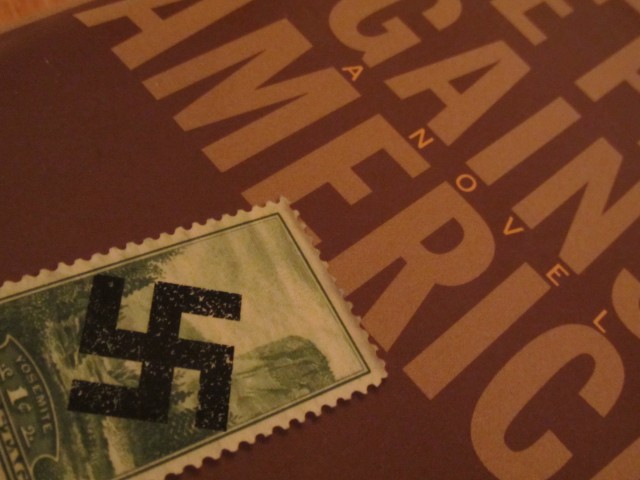 I didn’t want to read Roth’s Plot Against America when it fist came out in 2004. There was all this talk around the Iraq War and the “war against Terror” about American turning fascist. Add to this all this creeping political theology in continental theory and Religion Studies,  and I thought it was all claptrap. Besides, I had other things I needed to read or wanted to read and this one didn’t seem so pressing. Usually I think you get to a book when you need to.

So I finally got to reading Plot Against America, Roth’s counter history of America flipping Nazi after Charles Lindbergh defeated Roosevelt in the 1940 elections. It was the right time to read it. I’ve been thinking a lot in my own work about the shift I’d like to see in contemporary Jewish philosophy from Germany circa 1900-1933 to a more American philosophical and theological idiom. I’m tired of the absolutism in current political theology (Schmitt-Strauss, Agamben, Zizek), and what I think is cynical anti-liberalism from both the right and the left. In trying to think the shift from Germany to the U.S. against political theology, I like to think that American politics and philosophy might have been spared some of the poison poisoning the Germans and the type of thinking that depends upon the Germans. I’m kind of keen on the New Deal, big government, and social-welfare liberalism, and I’d like to think this is a deep part of the American Jewish DNA.

So reading now Roth’s counter-history comes at the right time for me, because one of things that it does is to force the reader to not take too many things for granted. “Turned wrong way round, the relentless unforeseen was what we schoolchildren studied as ‘History,’ harmless history, where everything unexpected in its own time is chronicled on the page as inevitable. The terror of the unforeseen is what the science of history hides, turning a disaster into an epic” (pp.113-14).

I’m pretty sure Roth’s story is not an argument against liberalism, as much as it is a philosophy of history and the realization that, like anything, a decent enough liberal political order is an artificial construct that requires protection against the kinds of political or moneyed interests that “plot against” it. So, yes, America was different, different than Europe, at least, which went totalitarian, and where the Jews were slaughtered, but it didn’t have to be. Whatever is wrong about America, I can’t help but entertain the lingering suspicion, perhaps a form of “Jewish wisdom,” that no matter how bad things are, they can always get much, much worse.

This is Roth at his philosophical best, the idea that you can’t take for granted the liberal protections of constitutional government.  Later, after the sudden disappearance of President Lindbergh and the re-re-election of Roosevelt, Roth writes, “But then it was over. The nightmare was over. Lindbergh was gone and we were safe, though never would I be able to revive that unfazed sense of security first fostered in a little child by a big projective republic and his ferociously responsible parents” (p.301). What I like about this statement is its intertwining of the political and the domestic. It’s bourgeois, clean, decent, and industrious in an incredibly physical, ordinary way. A lot has been said about Roth, this way and that, but one thing I don’t think he is is “cute.” That’s what I like most about him as a writer.

One of the things I like about the nostalgia of Roth’s America, cirica 1940, is the magic of its construction. I think I know how he does it. He works a kind of name-magic.  Roth conjures the sense of time and place, the order of a world, by stringing together names like Alvin, Amelia Earhart, Aunt Evelyn, Bess, Bnai Jeshurun, Brandeis, Bullet Apfelbaum, bullshit, Coughlin, Edison, Eleanor, Essex County, FDR, Har Zion, Jefferson County, Kentucky, kike, Kurowski, LaGuardia, Leo Frank, Lincoln, Lindbergh, Maplewood, Metropolitan Life, Manhattan, Morgenthau, Mount Vernon, Pearl Buck, PTA. Seldon, Scranton, Summit, Uncle Monty, Weequahic, West Virginia, Winchell, Washington.  The combined force of the nominal constellation –distant in time, place-particular, and loaded with possibility and counter-possibility– conveys a fragile kind of American aura.

Zachary Braiterman is Professor of Religion in the Department of Religion at Syracuse University. His specialization is modern Jewish thought and philosophical aesthetics. http://religion.syr.edu
View all posts by zjb →
This entry was posted in uncategorized and tagged American Judaism, anti-Semitism, Jewish Philosophy, liberalism, parks & gardens, politics, what i'm reading. Bookmark the permalink.