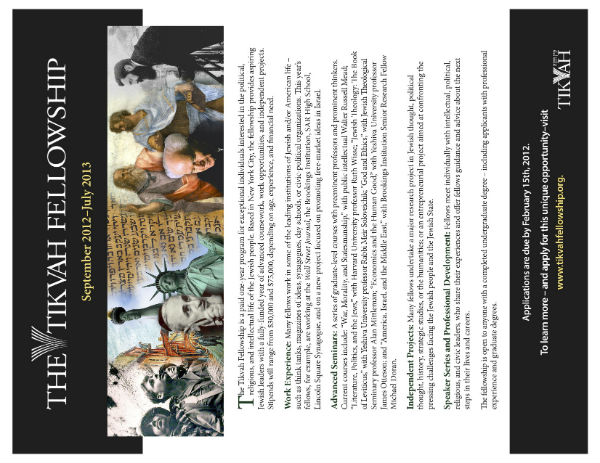 A friend posted on FB an article in the Jerusalem Post  about a post-baccalaureate program organized by the Tikvah Fund, and it’s nice to see that people are finally ceding that this is, in fact a right wing organization with its own, I’ll admit, subtly crafted agendas. This has been a problem in the past, the denial of any political orientation, and this kind of admission goes a long way in addressing concerns regarding ideological transparency once raised about the organization.  Now if they will only stop bragging about how difficult the texts are that they read, or how serious the thinking is. It’s obnoxious special pleading, because for all we know, maybe the programming is not all that “serious.”

The remaining puzzle is the claim, it’s pretty much always the same claim, made about and by liberal student and faculty participants at Tikvah platforms. If it’s such a rightwing outfit, what are they doing there? I’ve already opined that the Tikvah Fund does not do lockstep ideological indoctrination, but that it’s agenda setting has everything to do with the hegemony by which discussions and the terms of discussion are determined in advance. Whether you are center of the line liberal or conservative, it doesn’t matter since the frame of reference has already been set by the organizers of the Tivkah Fund according to its own thinking.

As long as you understand that, and you have an elite academic pedigree, then it’s really up to you to decide if the discussion you really want to be having is with William Kristol about Alan Bloom’s The Closing of the American Mind.   For the money they throw at you, it’s probably worth the price of admission, and I’m sure, not uninteresting in its own right. At the end of the day, we’re all adults here, faculty and advanced graduate students, and even undergraduates, all capable of assessing different points of view; not like those high school kids signing up for the Tivkah program on God, Ethics, and Democracy  at Yale and Yeshiva Universities under more definite conservative tutelage.

I for one am still waiting for someone to write an insider’s tell-all profile or to send in an independent journalist who might do a more thorough and professional job reporting the ins and outs, one more willing to bring in alternate perspectives of firsthand participants? Articles like this one in the rightwing Jerusalem Post tend to be puff pieces in which only the happy campers are interviewed. But the money distorts everything, even as it creates the agenda. These are students who are being handsomely paid, so it’s really hard to assess what’s going on based on their word. To assess all of this this would require input from students who’ve gone through this or that Tikvah Fund program whose perspectives might be more critical. Because the exclusion of those voices from articles like this one in the Jerusalem Post are just feed the propaganda mill. Without more critical insider voices, both the rosy views as well as my own sour view about the Tikvah Fund are utterly unfalsifiable.

Zachary Braiterman is Professor of Religion in the Department of Religion at Syracuse University. His specialization is modern Jewish thought and philosophical aesthetics. http://religion.syr.edu
View all posts by zjb →
This entry was posted in uncategorized and tagged American Judaism, politics. Bookmark the permalink.