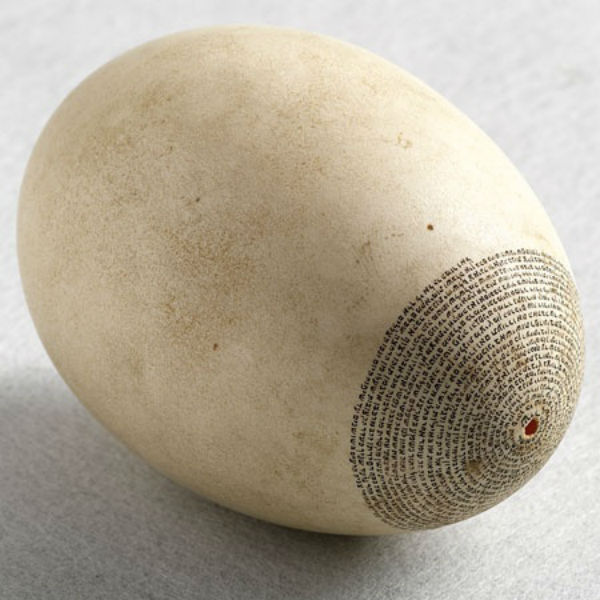 So this is what the Song of Songs looks like written on an egg. Why do people do these kinds of things? I think because they can. I found this photograph at Tumblr and wanted to post it here. It’s one of the strangest pieces of decorative art I think I’ve ever seen. From Poland (19th C.), it’s an egg decorated with a micrographic text from the Song of Songs. In general, I’m drawn to combinations of organic and inorganic things. What’s of particular interest here is the rounded surface upon which the text is written, and the shape that this rounded form gives to the text. I found, also at Tumblr, this little bit of explanation as well: “From the 18th century, and perhaps even earlier, hollow eggs on which sacred texts had been written in micrography were used to decorate European sukkahs. Not all the texts related directly to the holiday of Sukkot, the Festival of Booths: this example has Song of Songs 1-4:7 inscribed in miniscule letters. At times feathers were added to the hanging egg, so that it looked like a bird in flight.” If anyone please knows anything about this particular folk art tradition, please let me know and I’ll add to this post.

Zachary Braiterman is Professor of Religion in the Department of Religion at Syracuse University. His specialization is modern Jewish thought and philosophical aesthetics. http://religion.syr.edu
View all posts by zjb →
This entry was posted in uncategorized and tagged art, Bible, Jewish art, Judaism, Shabbat & holidays. Bookmark the permalink.