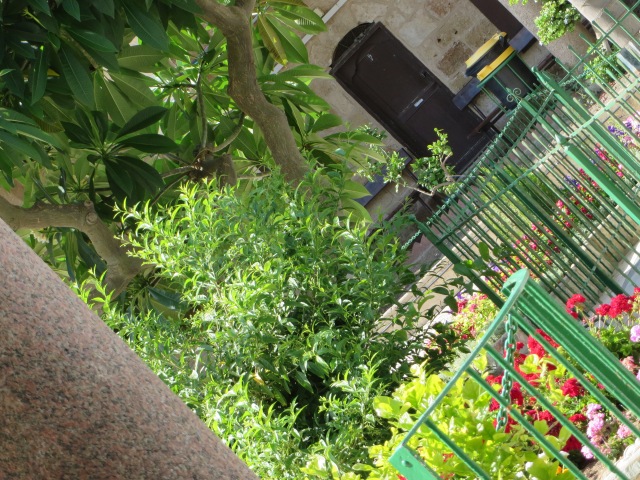 With its narrow streets, gardens, mosques, and churches, the old port town of Acco (Acre) is not so unlike Tel Aviv. Both places are tucked into themselves and into their own “identity.” The conical minarets, I thought were strange looking, and I’m learning that they are Turkish, as are the baths, renovated bazaar, and the remnants of historical khans, or inns. Does this mean that, historically, the Old City of Acco is an Ottomon town as much as an Arab one? It’s easy to move around in the little Old City as a foreign tourist. Sadly, the groups of otherwise charming and perfectly well behaved Israeli teenagers on school trips look like occupiers, not one more bit of the mosaic. In contrast, access to and moving through the al-Jazzar mosque and its garden courtyard is very easy. The second largest mosque in the country and based on the Blue Mosque in Istanbul, it’s one of my favorite places in Israel. It’s a little paradise with lots of green, water, and light. The place is open and relaxed and people are happy to talk with you. In a remarkable perspectival transformation, leaving Acco and listening to Arabic music on the radio on the drive back to Hadera, the country looks like Palestine.

Zachary Braiterman is Professor of Religion in the Department of Religion at Syracuse University. His specialization is modern Jewish thought and philosophical aesthetics. http://religion.syr.edu
View all posts by zjb →
This entry was posted in uncategorized and tagged Islam, Israel, Palestine. Bookmark the permalink.