We’re All Jewish Now (Claire Katz, Emmanuel Levinas and the Crisis of Humanism) 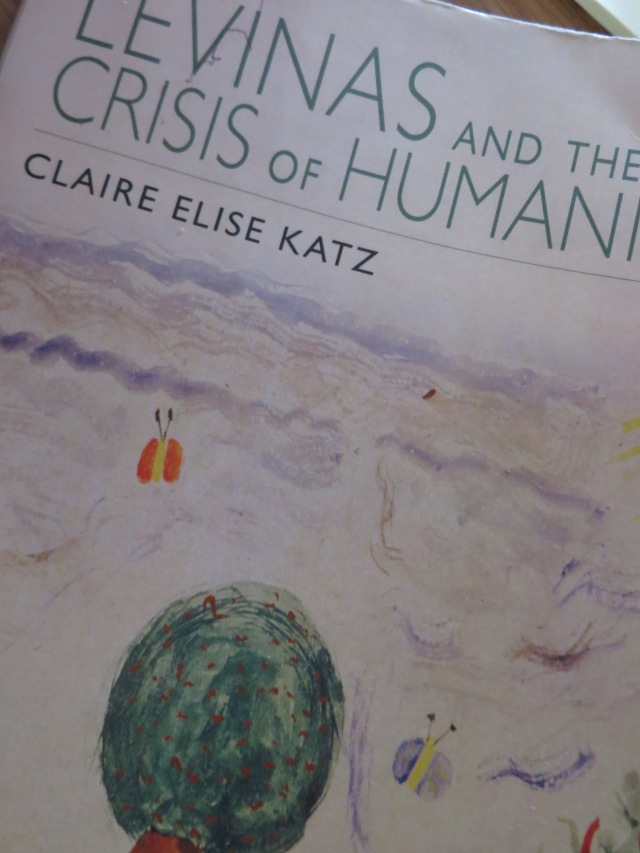 I don’t often like reading Levinas or reading about Levinas. But my interests tend often to narrow, which may explain why I liked so much Claire Katz’s new book, Levinas and the Crisis of Humanism. Most of what I liked are the clear new horizons that open Jewish philosophy out into current debates re: the human, humanism, the philosophy of education, and the future of the Humanities. I’m really glad I’m not even a fellow traveler, though, because Claire is going to have an awful lot of explaining to do when the Levinas philosophy-people find out. It’s not only that Levinas is once again stood out to be a “Jewish philosopher.” It’s worse than that. Now we’re given the very bold claim to a new kind of universalism. The New (Jewish) Humanism ascribed by Claire to Levinasis intended for everyone. “[W]e are all…Jewish” now (p.14).

Truth be told, I’m not put off by the Old Humanism of the Enlightenment, if only because I don’t recognize the common notion of it that this form of Humanism reflects in each and every case the principle of single, solitary, autonomous men, whose rights run prior to social responsibility, in particular to the problem of suffering. Even in the French Enlightenment, there is the binding of persons together into a unit to secure common political purposes. Even to talk about rights is already to negotiate them in relation to their own other, namely obligations and responsibilities; while the converse is just as true, and simultaneously so, that to talk about responsibilities already opens up conversation about rights at the limit of obligation.

New Humanism is Old Humanism, and neither have anything to do with Judaism in any simple sense. One flaw marked by Claire in the model of western education modeled by Rousseau is the isolated strain of the charismatic teacher. But we can find the same charisma in Kabbalah and Hasidism, or the same social isolation from the am ha’aretz in the Babylonian Talmud. This is to say that the critique of Old Western Humanism does not come wholly from the outside, i.e. from Judaism as putatively conceptualized this way or that way (pp.53, 57). As I see it, critique can only come from a place that is simultaneously inside and outside, like the one occupied by Levinas himself, in this case from the position of Judaism as an “occidental faith” (p.58).

So much of the problem with the critical signaling of the rhetoric of Humanism and its crisis has to do with Europe and the 1920s, 1930s, and 1940s. Can liberalism protect against Hitlerism (p.61). Levinas thought no, and that’s the way it must have looked, tout court, viewed from the particular angle of Europe at the time, centered in France, and especially Germany. But isn’t that all the more reason to look towards England and towards the United States and its philosophical traditions, including Dewey and Nussbaum to whom Claire points her readers?

What this pointing generates is this really interesting discussion of philosophy of education, of Levinas and pragmatism, and a genuine American universalism stamping Jewish philosophical ethics in that bold and a little bizarre claim for the primacy of a concept of Jewish education as understood as a model for moral development based on principles of connectivity and empathy. The upshot of Claire’s book is directed against Pierre Hadot and the Stoic model of philosophy as individual “peace of mind (ataraxia), inner freedom (autarkeia), and cosmic consciousness” as a kind of therapy in the face of death and the problem of suffering (pp.37-38). This was the position staked out, respectively, by Buber and Rosenzweig against philosophy at the end of the second part of I and Thou and in the introduction to The Star of Redemption.

What trips me up, though, is a conceptual reflex that I often find among philosophers and among ethicists in particular, which is to look for the modal form of “necessity,” followed by the worry that philosophy can’t supply the goods. We see this in the concern expressed by Claire that “there is nothing in a discussion of competing rights that will turn one away from one’s own rights and to the Other,” in her concern that philosophy does not “necessarily [turn] us toward the Other.” There seems to be no point or principle that might “necessitate” the turn to the other, to “automatically [yield] the normative claim to responsibility.” Is that why I am supposed cede my own right (pp.6, 7), because there’s no other way to guarantee moral education the results that educators and ethicists want?

I suppose this is where religion and Judaism are supposed to step in, to shore up ethics on the basis of principles that operate automatically. I just don’t think that it works out that way. The rabbis in the Babylonian Talmud maintained the uncanny propensity to parse every obligation into bits, rendering clear normative practice virtually inoperative. Indeed, the Judaism of the rabbis or the kabbalists was just as much mired in its own subject and substance as Rousseau and “the West” were in their own. The only way out was the Enlightenment and Emancipation, the Old Humanism that broke the back of the established aristocracy and church. Imposed from the outside upon the Jews and modern Jewish philosophy as both “right” and “obligation,” it seems that liberal Jewish philosophers like Cohen and Levinas were more than willing to try to take up that ethical universalism into the very substance of Judaism. Against Stoicism, at the heart of modern Jewish philosophy is this attempt to run out the Old Humanism, turning it into new forms of Hebrew Humanism, Judaism as the “occidental faith” of universal culture.

Opening up Jewish philosophy to a broader conceptual universe by asking what it means to be “human,” Claire’s anti-Stoic book about Emmanuel Levinas will not so much resolve as it will rile current debates about the role of religion in public life or the place of Judaism in continental philosophy.

Zachary Braiterman is Professor of Religion in the Department of Religion at Syracuse University. His specialization is modern Jewish thought and philosophical aesthetics. http://religion.syr.edu
View all posts by zjb →
This entry was posted in uncategorized and tagged Claire Katz, ethics, Jewish Philosophy, Judaism, Levinas, what i'm reading. Bookmark the permalink.

6 Responses to We’re All Jewish Now (Claire Katz, Emmanuel Levinas and the Crisis of Humanism)