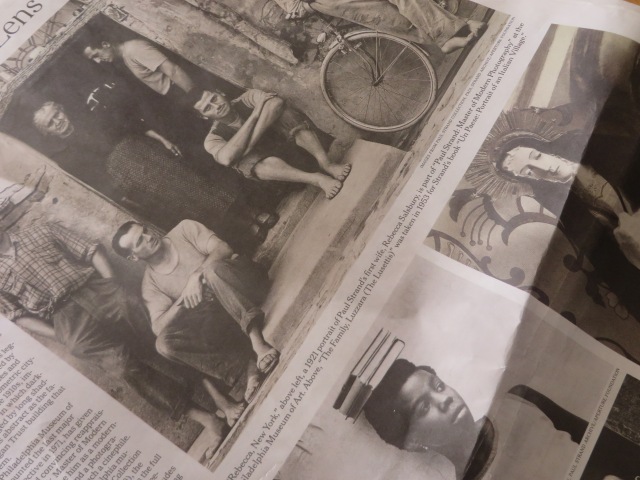 Always in search of classical American visual vernacular, if I had the time I’d go straight to the Philadelphia Museum of Art to see the Paul Strand retrospective. I’ll have to make do with the article by Karen Rosenberg here in the NYT.  What you get with Strand is a clean photographic style, combining modernism, socialism, Ethical Culture, and humanism. In Strand’s earlier work, structures of capital and industry dwarf the human figure. His later work (starting in the 30’s?) is more given over to the human face and and to abstract, simple, small town, small scale places.

In her article, Rosenberg mentions the short film called Manhatta, which Strand made with Charles Sheele in 1921. You can see it here on Youtube.  It’s a magnificent little thing. Verse from Walt Whitman’s Leaves of Grass frame shots of contemporary New York City. The shots are long cuts, which show different tempos of movement within what looks like a still image. In this paean to labor, human figures and ships are on the move around and under skyscrapers, over water, and other city views. Steam belches through the entire film. The gothic arches of the Brooklyn Bridge and a concluding spiritual gesture form the film’s coda, bending the metropolis back into the humanist frame provided by Walt Whitman.

Zachary Braiterman is Professor of Religion in the Department of Religion at Syracuse University. His specialization is modern Jewish thought and philosophical aesthetics. http://religion.syr.edu
View all posts by zjb →
This entry was posted in uncategorized and tagged architecture, cinema, New York, Paul Strand, photography, politics. Bookmark the permalink.