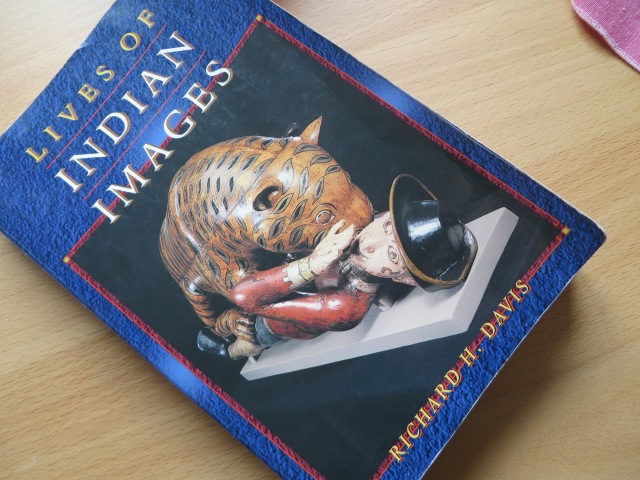 A super awesome book, I’m not sure how I stumbled upon this one. Maybe maybe it was upon the recommendation of my nephew who went to Bard, where Richard H. Davis teaches. Less devoted to aesthetics per se, Lives of Indian Images has us look in each chapter at one particular image biographically. The life of an image is related to place, the way images are tied to place, removed from place, restored to place across all the violent disruptions that mark historical time. The dislocation of images includes the fate of images as war booty between competing Hindu courts, the late medieval (?) Muslim conquests, when, at times, images were either destroyed  by invaders or secreted away by their devotees; or during British colonial rule when religious images get bought and sold on the international art market.

There’s a lot of good material here on museum studies relating to the place of religious icons and other objects, and the tensions involving the transition between their cult value and exhibition value, the transformation of “idols” into art objects in the late 19th century and 20th century west, their fragmentation and framing by the museum, theological and ritual versus humanistic and aesthetic orientations, and vexed legal questions regarding their repatriation.

The lens through which Davis considers the lives of Indian images follows the politically rough and tumble, while at the same time respecting and maintaining the strong sense that these lives are bound up metaphysically and theologically. Citing Roland Barthes, Davis notes that the first order theological signification of an image as paired with an embodied notion of deity is not lost, but is rather augmented or enhanced by a secondary signification as a political signifier (pp.64-8). Complementary in perspective, neither lived aspect cancels out the other. The one does “transfer” over into the other, as theorized in some contemporary works of political theology.

Zachary Braiterman is Professor of Religion in the Department of Religion at Syracuse University. His specialization is modern Jewish thought and philosophical aesthetics. http://religion.syr.edu
View all posts by zjb →
This entry was posted in uncategorized and tagged art, image, India, politics, religion, what i'm reading. Bookmark the permalink.