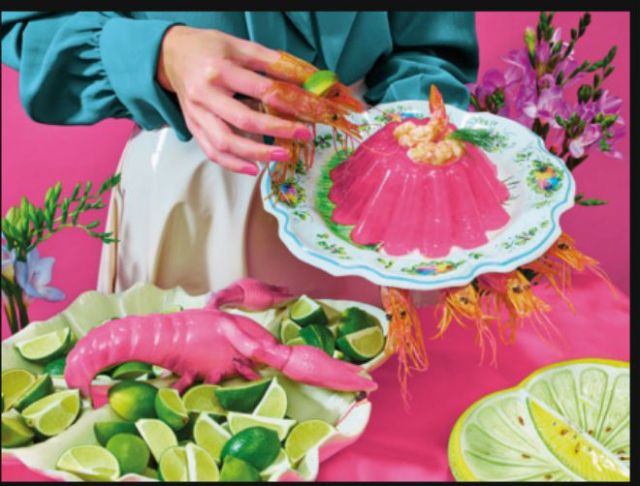 Brilliant piece, which you can read here, in the NYT Sunday Magazine by Tamar Adler about the Betty Crocker food phenomenon as exemplified by the 1971 Betty Crocker Recipe Card Library (with photographs by Maurizio Cattelan and Pierpaolo Ferrari). In a private exchange, Martin Kavka suggests to me that this is the aesthetic that defines by way of aspiration my approach to contemporary Jewish philosophy, both in my more formal work and here especially at the blog. Martin Kavka is very astute. Except perhaps for the lobster, what binds me to Betty Crocker is the formal attention to artifice that is bright and sharp, to the way things look and get pieced together, a style that is “lurid, exotic, carnival-like and vulgar,” but that looks to the perfection of things, or the semblance thereof, in an imperfect world, ringed and rounded, held and encased in circles, while yet human-all-too-human in basic orientation.

“It is a dish hard to make sense of: a shimmering vermilion ring of canned tomato sauce, held motionless by gelatin, concealing a coeur caché of canned asparagus and artichoke hearts, the hole at its middle filled to bulging with mayonnaise and sour cream. Called ‘‘Tangy Tomato Aspic,’’ the dish dates from the atomic age, the decades after the bomb was dropped, the war won and a clean, bright American outlook born. It was the age of technocratic make-believe and the early days of the anthropocene. Gastronomically, it was an age that today — from a perspective admiring of the natural and authentic — looks shockingly artificial.”

Zachary Braiterman is Professor of Religion in the Department of Religion at Syracuse University. His specialization is modern Jewish thought and philosophical aesthetics. http://religion.syr.edu
View all posts by zjb →
This entry was posted in uncategorized and tagged aesthetics, blog, Jewish Philosophy, technology. Bookmark the permalink.