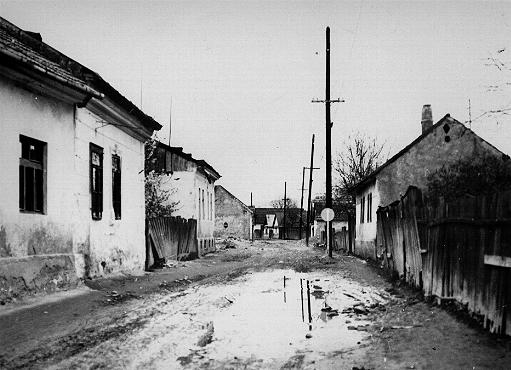 (Sighet after the deportation of the Jewish ghetto in 1944)

With either impatient snark or without a shred of decency, self-defined iconoclasts are taking easy shots against Wiesel and his legacy in the instantaneous wake of his death. None of the arguments are new. Indeed, the criticism of the Holocaust industry represented by Wiesel has itself become something of its own cottage industry upon which academic careers have been built. At its worst the criticism is full of self-righteous and unsympathetic fury by far removed critics. Against a certain form of Jewish memory, the shots taken by the critics are themselves a-historical in their refusal to understand the rhetorical and conceptual moves made by Wiesel and others who directly suffered the event, who survived the event, and who were the mediators of its first impact onto the larger cultural consciousness in the west in the 1950s, 1960s, and early 1970s.

Here I want to focus on the “theological” question. In particular, the critics condemn Wiesel for turning the Holocaust into a religious fetish. The critics don’t like the idea that something like the problem of evil might in fact be “incomprehensible,” or that our conventional language might come up short before it. This was a point made about ordinary language not just by Wiesel, but also by Primo Levi about language in the camp and Adorno about bourgeois lyric poetry. But what the critics really don’t like is Israel, the contempt and rage against it being barely concealed if at all. To say that  Wiesel and so many of his generation turned Israel into a god, an idol, is to completely miss the point that for them Israel turned out to be more reliable than God. It is also to miss the point, the terrible logic of precarity, that for them, Israel represented not some religious triumph and vindication, certainly not a vindication of God, but a very small and precarious human solace.

What the critics don’t even try to attempt to understand is how, historically, the Holocaust and its first memory rose up not as a theological figure (as the critics claim), but as an anti-theological figure, a sharp and caustic rebuke that flew straight into the face of what was taught to be the workings of a good and just, a merciful God, an obscenity which the establishment of the State of Israel did nothing to resolve. As best as they could, they understood that “Auschwitz” represented a primary moral, philosophical, and theological challenge. Regarding the language of unspeakable suffering, pray tell if anyone thinks he or she has today and at long last with some cheap theory found the master key with which to unlock and “understand” the mystery of human depravity that hangs over the Holocaust and its memory, the pall it casts on everything divine and human.

Zachary Braiterman is Professor of Religion in the Department of Religion at Syracuse University. His specialization is modern Jewish thought and philosophical aesthetics. http://religion.syr.edu
View all posts by zjb →
This entry was posted in uncategorized and tagged Holocaust, Wiesel. Bookmark the permalink.