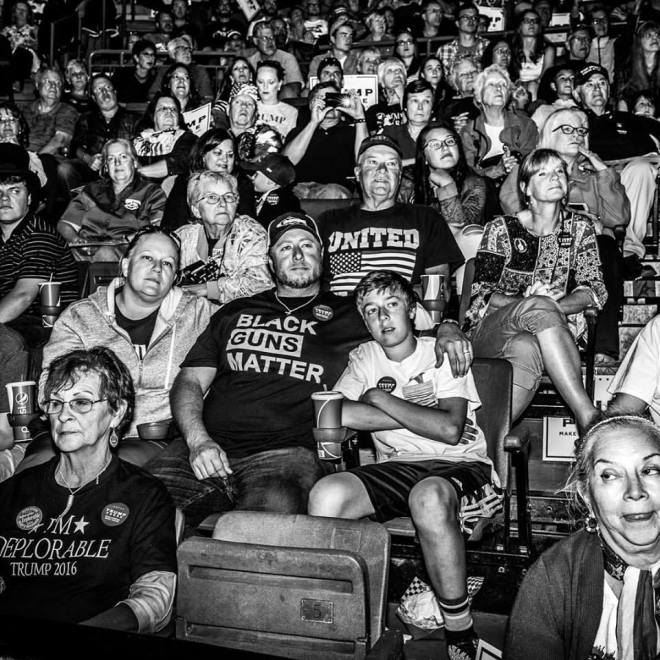 I bet we see a lot of this photograph by Nate Gowdy, of a Trump rally in Loveland, CO, on Oct. 3rd, 2016. Someone on FB said it could win a Pulitzer. It has the stuff of icon all over it. With this and that exception, the people look off to their left. Most of them seem satisfied. They seem to like what they see and what they hear. The mouths are almost all drawn, some with tight smiles. “I’m Deplorable.” “Black Guns Matter.” There’s sarcasm in the  room that offsets the satisfaction, although maybe the sarcasm belongs not to crowd but to the photograph. The adolescent boy, already big, has his arms crossed; the woman behind him to her right, her legs crossed. Thinking about Roland Barthes’s meditation in Camera Lucida upon a photograph of his mother, I want to ask if they are already extinct. As a single physical presence, they fill the picture-frame vertically, like a mountain. How do we look at this picture? With disgust and/or sympathy? Our own gaze, the gaze of the viewer, returns back and enters into this still living mass. From what I can only presume to be a position of my own privilege, I come back to this photograph and find it hard to comprehend. But I need to check that impulse. I hope my look is not from a position of superiority and moral judgment, which would miss the power of this historical image at this human moment. What are they thinking? There they are, there they were, an emanation. In my mind, I keep coming back to this thought-full photograph.

And then what? About the future of the Republican there’s the piece at Politico by Julia Iofe which you can read here. It is an anticipatory postmortem. She writes, “Far from the halls of the Hoover Institution and big Washington policy shops is a force they cannot control: the Trump campaign, a small collection of social-media gurus, Breitbart alumni, and Trump family members who have managed to capture the majority of Republican voters in the U.S., and who may use their new power to launch a media network, or take over as the new axis of the GOP, or both. And as the old establishment looks on in horror, the civil war in its ranks has already begun…[A] resoundingly loud majority of their electorate, the very people for whom they were tending the flame, have roundly rejected their vision. Few in the Republican base in 2016 cared much for free trade and supply-side economics, preferring the isolationist, nativist, paleocon teachings of the itinerant preacher Trump.

Zachary Braiterman is Professor of Religion in the Department of Religion at Syracuse University. His specialization is modern Jewish thought and philosophical aesthetics. http://religion.syr.edu
View all posts by zjb →
This entry was posted in uncategorized and tagged photography, politics. Bookmark the permalink.