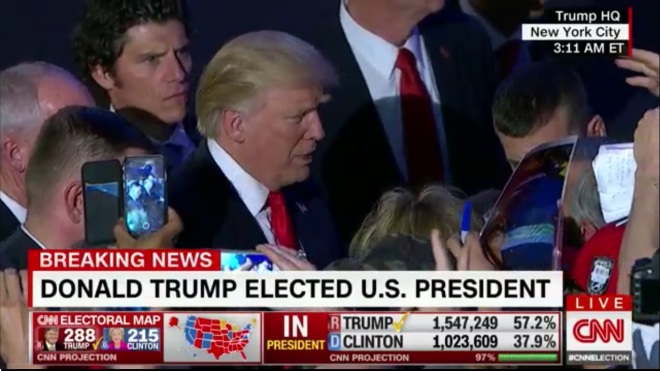 It’s past 3:00 AM and I wanted to put these quick remarks up at the blog. It’s hard to imagine how now President-Elect Trump will walk back the damage he did to this country after a rancid political campaign, how he will unsay what he said. But here is my review of his victory speech which he delivered after Clinton called to concede at 2:40 AM. It was a gracious victory speech with props to Clinton for a career of public service, other bi-partisan gestures, a call  for racial inclusion, an appeal to hardworking families and renewing infrastructure and the American Dream, a promise of international cooperation, evoking “dreams of beautiful things.” There was no nasty gutter sniping, no bragging, no Crooked Hillary, no calls to “lock her up,” no vendettas against the GOP elites who didn’t support him, no talk about the “swamp” in Washington D.C., no incitement against the media, no animosity, no mention of the Wall with Mexico, no attacks against “illegal immigrants” or Muslims, no economic populism against trade, no appeal to the mob or to the few people in the crowd who tried to chant for more red meat.The speech was Donald Trump on quaaludes.  And then he started to meander and just kibbitz about people on his campaign staff. It was all  low energy. That is to say, there was none of the stuff that got him elected. He simply switched the diskette. If that’s how he had run his campaign, he never would have won.

We’re in it now. This is now what the country is stuck with. Was it all a pack of lies? And will he now switch to what deck? How much of the campaign was just a cold and calculated show we’ll soon find out. Tonight, all the rough edges were slathered in honey-tones. What’s safe to say is that the liberal-left and radical left just got schooled in the art of politics by a magician who spent two long and bitter years pooling the wool over the eyes of his own base; or he’ll simply take his people where he wants to take them. He won the white working class, and the business interests will be soon brought on board with their share of tax cuts and deregulation. As for the rest of us, it’s all a guess, and a lot of time will be spent and wasted trying to discern truth and lies. Anyone who goes up against him is going to have to outperform him at the same game he has redefined.  A parody of the political, it’s utterly grotesque and immoral; and also dangerous. There’s every reason to think that a lot of people are going to get hurt in the process. Bernie Sanders was never going to win at this game, because he was committed to “the truth.” But to play the game, the devil has to get his due.

Zachary Braiterman is Professor of Religion in the Department of Religion at Syracuse University. His specialization is modern Jewish thought and philosophical aesthetics. http://religion.syr.edu
View all posts by zjb →
This entry was posted in uncategorized and tagged politics. Bookmark the permalink.