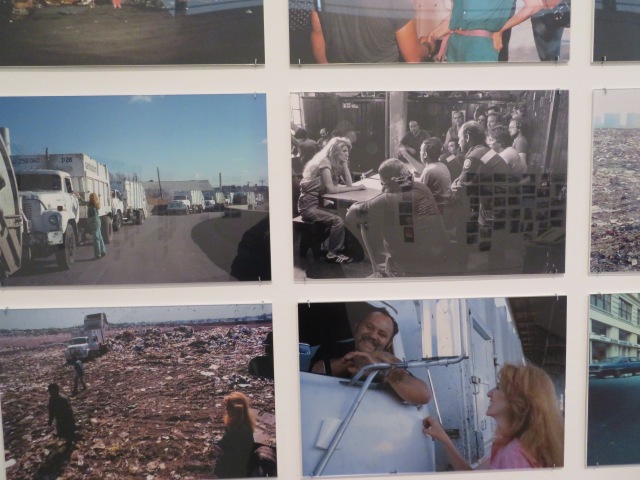 As it turns out, Jewish ritual, the idea of the holy, informs much of this artist’s work and her thought. They cut against the grain of “messianism” in ways that are at once profound and ordinary. My introduction to her work as somewhat happenstance. Vetting a manuscript on contemporary Jewish art and conceptualism, I stumbled upon a reference to Mierle Laderman Ukeles and her “Maintenance Art Manifesto.” I found it immediately useful as a model for work in Jewish aesthetic thought and philosophical Talmud. Some months later, the Queens Museum put on a retrospective of her work. Ukeles was a pioneer in 1970s feminist art. Her particular hiddush (innovation) was to turn the drudgery of a married women’s domestic work into the labor of art. As conceptualist art, the work cannot be understood apart from the concept that builds it. You can read the full version of her Maintenance Art Manfesto here. It turns out too that her father was a rabbi.

About the tension between art, labor, gender, and the particularities of motherhood, she wrote in the Manifesto,

I am an artist. I am a woman. I am a wife. I am a mother. (Random order). I do a hell of a lot of washing, cleaning, cooking, renewing, supporting, preserving, etc. Also, (up to now separately I “do” Art. Now, I will simply do these maintenance everyday things, and flush them up to consciousness, exhibit them, as Art. I will live in the museum and I customarily do at home with my husband and my baby, for the duration of the exhibition. (Right? or if you don’t want me around at night I would come in every day) and do all these things as public Art activities: I will sweep and wax the floors, dust everything, wash the walls (i.e. “floor paintings, dust works, soap- sculpture, wall-paintings”) cook, invite people to eat, make agglomerations and dispositions of all functional refuse. The exhibition area might look “empty” of art, but it will be maintained in full public view.

Translating this idea into art, she contracted with museums and galleries to clean its exhibition spaces, photographing and documenting the entire process as a “happening.” Defined it in the Manifesto, “My working will be the work,” meaning, her (domestic) working will the work (of art). The photographs documenting this happening were shot at various angles meant to present the work itself and the space of its performance. At some point, an art critic suggested caustically that perhaps, inspired by Ukeles, the then financially strapped Sanitation Department could call its work art and apply for a grant from the National Endowment for the Arts. Responding to this barb, Ukeles reached out to the New York City Department of Sanitation, offering to become its artist in residence. The result were full blown documentations of the department and especially its workers. Most famously, the Touch Sanitation Performance project was meant to give voice to working people; Ukeles set out in this performance to shake the hand of every single worker for the department, to thank them for the work they do for the city. Again the entire process was documented. About the work of sanitation, predicated on large scale systems and the transformation of materials, she insisted that there was nothing more essential to life and to the life of the city.

From the Manifesto, the ideational contrast between the art of the Avant-Garde versus Maintenance Art reiterates Freud’s famous distinction between “the death instinct” and “the life instinct.” The avant-garde and the death instinct inspire separation, individuality, “[following] one’s own path to death—do your own thing; dynamic change,” “[d]evelopment: pure individual creation; the new; change; progress; advance; excitement; flight or fleeing.” In contrast, Maintenance together with the life instinct exhibit “unification; the eternal return; the perpetuation and MAINTENANCE of the species; survival systems and operations; equilibrium.” The idea behind Maintenance Art is to “keep the dust off the pure individual creation; preserve the new; sustain the change; protect progress; defend and prolong the advance; renew the excitement; repeat the flight; show your work—show it again keep the contemporary art museum groovy; keep the home fires burning.”

The Jewish angle for this work starts with biography, Ukeles being the daughter of a rabbi, and her own interest in Jewish ritual. From Judaism, the key concept brought into Maintenance Art is holiness (kedusha). On view at the exhibit is a long quotation from Abraham Isaac Kook and also a lengthy citation from Rachel Adler’s early work on the mikvah. The passage from Kook was included for one of the earlier projects, conveying the idea that the work of art and art performance is like a ritual. Both art and ritual [1] set apart the space of their appearance, [2] resist what is perceived to be the false and subjective binary between the holy and the profane, and [3] activate the essential transformation of the latter into the former. The citation from Adler informs Ukeles’ Mivkah Dreams from the larger Immerse Again Immerse Again project (1986). This piece gets a brief mention here in Four Centuries of Jewish Women’s Spirituality: A Sourcebook edited by Ellen M. Umansky, Dianne Ashton, p.191). It’s fundamental visual is the repetition of the words, “immerse again.”

In working through the retrospective at Queens Museum of Art, I took for the slideshow below what for me is an unusually large number of digital photos. Usually at a museum or gallery show I take up to 20 images. Here I took nearly one hundred. This fits the work. I would like to think that my own documentation here represents a third reiteration adding on to the performance itself and the artist’s own photographic and textual documentation. The slideshow includes photographs of the photographs and a lot of the written documents, much of it original from the 1970s and 1980s. What I hope gets underscored is the intimate relation between physical bodies, written texts, ideas, performance, and photography. Tracking back and forth between ideas, texts, and visual images lends itself to a multi-layered form of deep immersion. That was my “experience” at the show, and this would be as true of religion as it is for art.

As for my own immediate purpose with this body of art is to work Maintenance Art Working as a simple form of quotidian life against false masculine bravado of “the messianic.” Against the avant-garde, Maintenance Art is “the sourball of every revolution.” None of the theorists opining about the messianic ever think to ask, “after the revolution, who’s going to pick up the garbage on Monday morning?”

Zachary Braiterman is Professor of Religion in the Department of Religion at Syracuse University. His specialization is modern Jewish thought and philosophical aesthetics. http://religion.syr.edu
View all posts by zjb →
This entry was posted in uncategorized and tagged art, gender, messianism, Museums & Galleries, ritual. Bookmark the permalink.