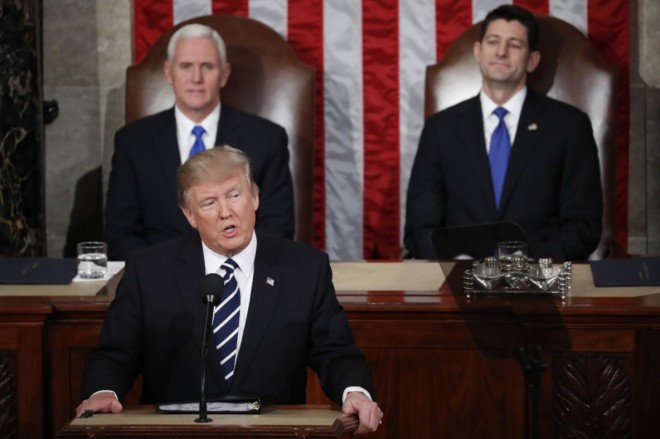 Full of soft religion and soft fascism, the Trump speech to Congress will do much to normalize this presidency if Trump can continue to stick to script. The transcript  is here. The tone was soothing and pitch perfect, the vision brighter than the President’s apocalyptic Inauguration Speech. But there were these undercurrents, the broad appeals to populism in the middle of the speech framed at the beginning and end by “miracle,” death, and “renewal,” the “American Spirit” watered by the sacrifice of patriots. The Bible knows no greater good than that. One blood, one flag, one God. President Trump made it all sound yummy. His fluffy speech tasted like cotton candy.
The speech unrolled like this:
American Greatness is now beginning.
A new national pride
Renewal of the American Spirit
America is strong, America is proud, and America is free.
[T]he chorus became an earthquake — and the people turned out by the tens of millions, and they were all united by one very simple, but crucial demand, that America must put its own citizens first … because only then, can we truly MAKE AMERICA GREAT AGAIN
[[Lots of populism in the middle]]
[[Keeping the nation safe]]
[[Drugs, immigrants, chaos, and the Wall were stuck in there somewhere]]
[[Trillion dollar infrastructure]]
[[Healthcare]]
[[Loosened regulations for drug companies]],  medical miracles, A Nation of Miracles
[[School choice]] public, private, charter, magnet, religious or home school
[[Urban poverty and violence]]
I have ordered the Department of Homeland Security to create an office to serve American Victims. The office is called VOICE — Victims Of Immigration Crime Engagement. We are providing a voice to those who have been ignored by our media, and silenced by special interests.
[[Veterans]]
[[A raw appeal to the death of  U.S. Navy Special Operator, Senior Chief William “Ryan” Owens, and his widow Carryn Owens]] Ryan’s legacy is etched into eternity. For as the Bible teaches us, there is no greater act of love than to lay down one’s life for one’s friends. [[A long, very long, sustained applause to the memory of a dead soldier and to his widow]]]
[Technological] marvels
safe streets, schools, jobs
This is our vision. This is our mission.
But we can only get there together.
We are one people, with one destiny.
We all bleed the same blood.
We all salute the same flag.
And we are all made by the same God.
[…]
Believe in yourselves.
Believe in your future.
And believe, once more, in America.
Thank you, God bless you, and God Bless these United States.