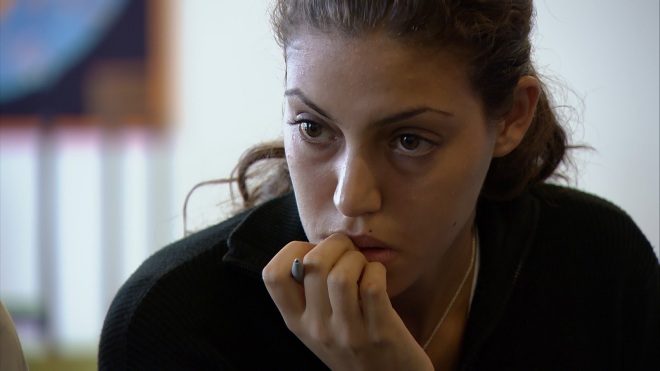 The few American reviews that I found online seem frustrated without understanding just why Hava Kohav Beller’s documentary In the Land of Pomegranates is such a hopeless reflection upon the Israeli-Palestinian conflict. The documentary follows a group of young Israeli Jews and Palestinians who have been brought to a small town in Germany to dialogue under the auspices of a group called “Vacation from War.” The exchanges in Germany are intercut with footage from the Second Intifada and the 2014 war in Gaza. Also featured are interviews with an Israeli mother living in a moshav in the south of Israel near the border with Gaza, a survivor from a suicide bus bomb attack, and one of the Palestinian organizers of the dialogue program. Another layer is documents a young Palestinian mother from Gaza taking her child to an Israeli hospital where he is receiving care for a critical cardiac condition.

In Beller’s film, the pretend that they are good and the weak pretend that they are powerful. The Israeli Jews who signed up for this kind of program are patriotic Israeli liberals who are open to compromise, hearing the other, coming to terms. They come across as well intentioned, privileged, uncomprehending, dumbfounded, and feckless. Perhaps more interesting is the position of the young Palestinians, which anchors the documentary. To a person, they express maximalist nationalist positions about the history of the conflict, say truly horrible things about the Holocaust, and dream about the future of Palestine without Jews. It is their land, all of it. Motivated by the myth of autochthony, they espouse the right of an occupied people to resist their oppressors by any means necessary, even at the expense of taking civilian life, which they view as collateral damage. There is no recognition of a Jewish right, any claim, any place in any part of the land. Caught between moral scorn and political exhaustion, they are not interested in “dialogue” and express little curiosity about “the other.”

The movie is heavily weighted to the Israeli experience from a liberal perspective. There is some, but only very little extreme religious rightwing expression from the Israeli side that might have complicated the liberal narrative. The young Israelis do not represent the government for which they are nonetheless responsible. More critically, the movie is stacked against the Palestinian participants, who are in a sense cornered and put in front of a camera. The whole exchange is organized in Germany, of all places, with Holocaust memory placed front and center. As oppressed people, could any one of the Palestinian participants even budge off an extreme nationalist narrative, show the slightest hint of a lack of national resolve in front of the camera? Is there any good to or sense in putting these kinds of exchanges in such public view?

Late in the film, one of the Israeli participants concludes that she and her compatriots have no right to demand recognition or forgiveness from the Palestinians, that it is too much to ask. She may or may not be correct. Another one of the Israeli participants concludes that there is nothing to talk about. This may or may not be true. What the movie highlights is the exclusive and tribal character of the conflict, the physical and psychological trauma, and a political dead end.

This well-intentioned movie is introduced with an epigraph attributed to the playwright Friedrich Dürrenmatt. “This inhuman world has to become more humane. But how?”  But perhaps the problem with the “Vacation from War” program and Beller’s documentary is that they are both organized around the question of “rights” and “recognition.” The problem is that this is a moral question (concerning the human right of the one party versus the other party to an asymmetrical conflict in which the other side has lost everything), when the moral and human question is actually the wrong question to ask. Mired in the morality of recognition, what seems for now an impossible discussion, the political horizon gets washed away.

It is hard to know what kind of conclusion to draw from such small sampling of reflection except that there is no post-national solution to this conflict. It could very well be that these sentiments reflect the views of this particular group of participants at this particular historical juncture when the possibility of peace would seem to be impossible. It could be that people are more free to talk across these kind of lines away from the gaze of the camera. Or maybe the correct conclusion is that this is not how to talk about Israel and Palestine, and that the best option is to separate the political question from the moral question and to figure it all out behind closed doors, away from the public eye. Can one narrow the frame to ending the 1967 Occupation and securing Palestinian independence instead of trying to re-litigate 1948 and the entire history of the conflict, the Holocaust included? Can Israeli and Palestinians escape the iron fate of narrative? Or is the conflict and the future of the two people stuck intractably in history? Perhaps not insignificantly, the child from Gaza with his mother barely says a word.

Watching a film like this, what is one to make of a one-state solution, the brutal version of the religious apartheid reality towards which the current rightwing government in Israel is leading the country, or the utopianism of leftwing critics who dream about a binational state or single democratic country, with or without Jews? In her book Parting Ways, Judith Butler modeled the future of Palestine upon the idea of cohabitation. The very idea is stressed by the extreme trauma shown by everyone in the film, a trauma that stems from a long, asymmetrical conflict and its intensification during and in the wake of the Second Intifada, and the sense of hopelessness that marks the present moment.

Is the situation as hopeless as all that? Maybe not, I’m sure others will opine. Indeed, maybe this was the wrong group to film, or, again, maybe the problem is the camera. Or maybe the intensive face-to-face dialogue format is the wrong model upon which to figure out the future. Be that as it may. In this film, the young Palestinians and Israelis look everything like a battered married couple in desperate need of separation but unable to agree to the terms of the divorce. That is how they appear before the camera, in the film. This is not Beller’s fault as a filmmaker. This was the dialogue on hand that she caught and which she then worked in such a way to reconstruct the conflict between two national identities from a liberal-left Israeli perspective. In a way, the camera necessitates this dismal appearance, and it could be that the actual human dimension is more complex and indirect than any camera can capture or convey.

Zachary Braiterman is Professor of Religion in the Department of Religion at Syracuse University. His specialization is modern Jewish thought and philosophical aesthetics. http://religion.syr.edu
View all posts by zjb →
This entry was posted in uncategorized and tagged cinema, Israel, Palestine. Bookmark the permalink.