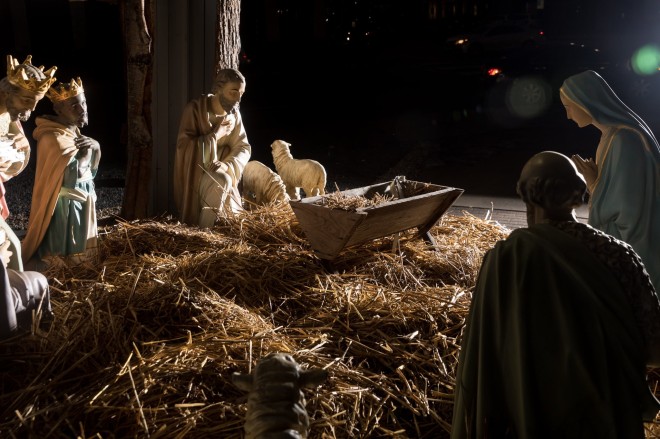 Is this a trend? About this utterly bizarre story, this article in the New York Times which you can read here about the images of baby Jesus stolen from holiday crèches across small town America reminded me of The Lives of Indian Images by Richard H. Davis. No longer fixed in place, the image of baby Jesus is let loose in the world as an object of violence. That is to say that to steal and abuse an image augments the power of the image-prototype by way of a negation. The idea that government might actually have to secure their place in public by means of technological surveillance systems is itself an arresting thought about religion and the power of “the state.”

And yet, of course, like any image in the history of image-making, the image of baby Jesus can be reproduced, today meaning mass produced. That too speaks to the power of images. As reported towards the end of the story, some of the clergy in the affected communities see in this trend a spiritual opportunity of sorts. Noteworthy is how an image and other kinds of religious objects function in community, attracting veneration and abuse. Not beside the point and reflected in the geography of the story is how this phenomenon seems to be happening in economically strapped, abused parts of the country. In this story, the utter vulnerability of baby Jesus highlights, one could argue, a true spirit of Christmas.

One last comment about the photographic images in the article concerns the arrangement of the supporting frame figures in the Jesus story surrounding the sad and sheer touchingness of the now empty crib. No longer in and of this world, baby Jesus has been occulted, like a Shia mahdi.

Zachary Braiterman is Professor of Religion in the Department of Religion at Syracuse University. His specialization is modern Jewish thought and philosophical aesthetics. http://religion.syr.edu
View all posts by zjb →
This entry was posted in uncategorized and tagged Christianity, image. Bookmark the permalink.