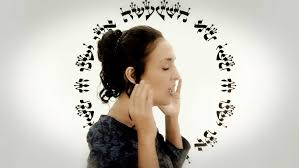 Victoria Hanna performed a piece at the Text Unbound: (Re-)Imagining the Talmud workshop at Bard College organized by Shai Secunda. Some of the performance was taken from Ani Yeshena (I Sleep), drawn from Song of Songs, which you can find here. She performed immediately after a lecture by Galit Hasan-Rokem in which Babylonian rabbis (in tractate Moed Katan) give voice to the strong poetry of women’s keening laments for the dead. Hannah’s performance reversed the voice. Shai recommended that I watch 22 Letters, taken from the Book of Creation (Sefer Yetzirah) which you can find here. (If you can’t follow the Hebrew, google search, for instance, “Victoria Hannah 22 Letters lyrics” and you’ll find translations.) Striking is the power of a woman’s voice and its visualization as that voice takes over, embodies, and transforms the nocturnal poesis of a patriarchal and mystical tradition. The frame is Mizrachi and (ex)religious. I would like very much to use the word “bewitching,” except that perhaps the term is too loaded.

Zachary Braiterman is Professor of Religion in the Department of Religion at Syracuse University. His specialization is modern Jewish thought and philosophical aesthetics. http://religion.syr.edu
View all posts by zjb →
This entry was posted in uncategorized and tagged Bible, gender, Kabbalah-Hasidut, music. Bookmark the permalink.