Remarkable little documents, here are the original Hebrew language sources and English language translations of two responses, letters from leading lights from the Haredi world, regarding the not closing or closing of yeshivot in response to the Coronavirus outbreak. The first one co-penned by Rav Chaim Kanievsky and Rav Gershon Edelstein is from Israel, where, because Haredi communities represent a powerful demographic and political bloc, the yeshivot are not closing. The second is from the leadership of the Beth Medrash Govoha in Lakewood, N.J., the largest yeshiva in the United States, where the yeshivot have to close because the government is demanding it.

These are not full blown halakhic responses nor should they be looked upon as such. Reflecting a snapshot of the moment, they are letters sent out to encourage and support the yeshiva communities and the larger Haredi public. Both letters express pain and concern about the institution of the yeshiva, relying on the cosmic protective power of talmud Torah and prayer and teshuva, the values of yirat shamayim (fear of Heaven) and confidence in divine justice and in divine salvation. The letter from Israel seeks to accommodate directives from the Ministry of Health, whereas the letter from the United States simply submits to the authority of government. The authors of neither letter mention pikuach nefesh, the putative notion that “saving life” is an overriding halakhic principle that precedes any other consideration, or how this principle might be relevant to the situation at hand.

As the epidemic and Haredi response evolve, I will continue to post relevant letters and announcements as they relate particularly to decisions that impact the closing or not closing of yeshivot, which are arguably the backbone of these religious communities. My guess is that the general rule will follow, which is that the American institutions will be the ones that suspend operation because the government will simply demand it of them in ways that are impossible in Israel given demographic and coalition dynamics that entrench the political power of those communities.

Our sages have already stated (Yuma 28b), “Since the days of our forefathers, the Yeshivos have never ceased [to be active] from them.  They further stated (Shabbos 119b):  The world only exists on account of the sounds of children in the house of their Rebbe [yeshivos].  They are the greatest insurance possible that the destroyer not enter into the homes of Israel.

Nonetheless, danger is certainly a more stringent concern than the possible violation of a prohibition.  It is [therefore] upon all of us to make great effort in all matters that require caution – such as: splitting up the students, ensuring that there is adequate space between person [social distancing – recommended at 2 meters], also to make sure that the classrooms and Batei Midrashim be properly ventilated, and to appoint supervisors [Mashgichim] to maintain the proper level of cleanliness as a health necessity.

Anyone that has even a shadow of a doubt that he or a family member may be ill, and even if he is only mandated to undergo quarantine because of a directive [and not out of a health concern], must refrain from entering the Bais Medrash. He must not be a source of risk or damage to another.

This is all from the perspective of an understood precondition to the action [of attending school or Yeshiva]. The Roshei Yeshiva and the administrators of the Talmud Torahs (and Yeshivos) must be on guard to ensure compliance.

Certainly, it is our obligation to awaken ourselves to the Fear of Heaven and to do Teshuvah, in accordance with the saying [of the sages] (Yevamos 63a), “Calamities only come to this world in order that [Klal] Yisroel strengthen themselves in the belief of the futility of “the strength and power of my hand” of all the nations during these times.  Rather, we must have faith in the Holy One Blessed Be He who watches over all His creations, and no man is stricken by a calamity if it was not decreed from Above.  And may the merit of Torah and all that strengthen us stand for us as protection and salvation.

The Eve of the Month when Salvation Encircles

Given the situation of a pandemic raging across the world in the sense of “plague in the city” (see Bava Kamma 60b), may God save us, as the merit of Torah is the shield defending us from all crises, as our eyes are dimmed and hopeful with the prayer that we merit salvation which surrounds [this time of year].

To our great distress, we are forced to comply with an express governmental decree that prohibits us to leave open battei midrash in which the voice of Torah reverberates, due to our absolute obedience to express decrees the government imposes upon us. We are calling out with a request that even though the battei midrash will not be open, each one of us should strengthen themselves further in Torah and prayer, in any context and any place they find, because this is the protective wall standing for us at this difficult time.

Each and every one is obligated to increase in their toil in Torah and to call out before the Creator of the world, so that we merit a full salvation soon.
May we all merit, “as in the days of your leaving the land of Egypt I will show you miracles” (Micha 7:15).

We sign on this out of broken-heartedness and pain

[[photo note: the image of the empty hall at the top of the post is not Coronavirus related. It is from an article published in 2017]] 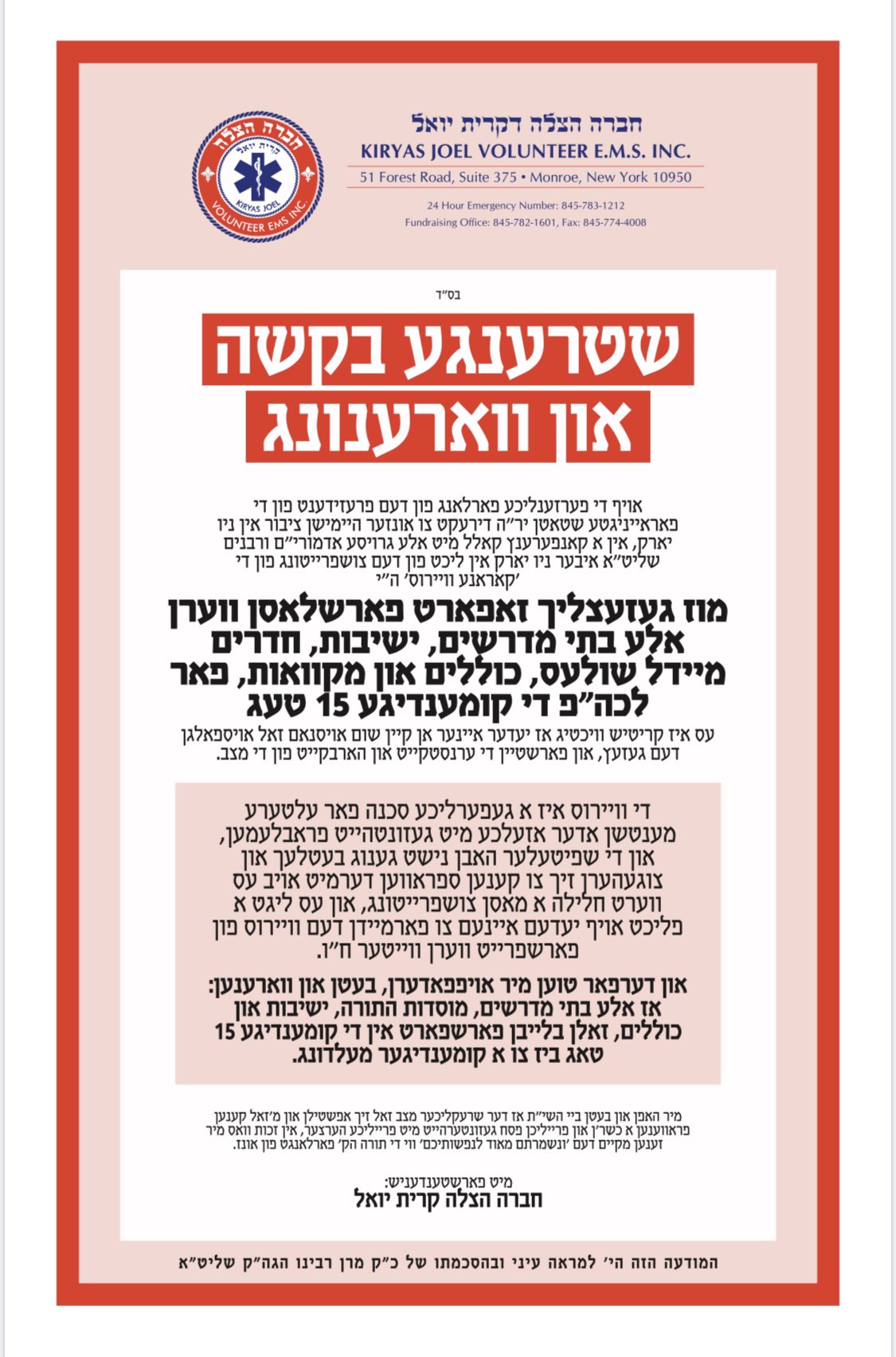 My Yiddish is nowhere near proficient to translate the entire document, but the gist of this was noted at Satmar Headquarters @HQSatmar:

By religious edict of Satmar Grand Rebbe Aron due to the #CoronavirusOutbreak every building belonging to the Satmar empire shall be closed until further notice, this includes every Shul, all School Systems, Mikvah’s or any public building with the Satmar name on it. 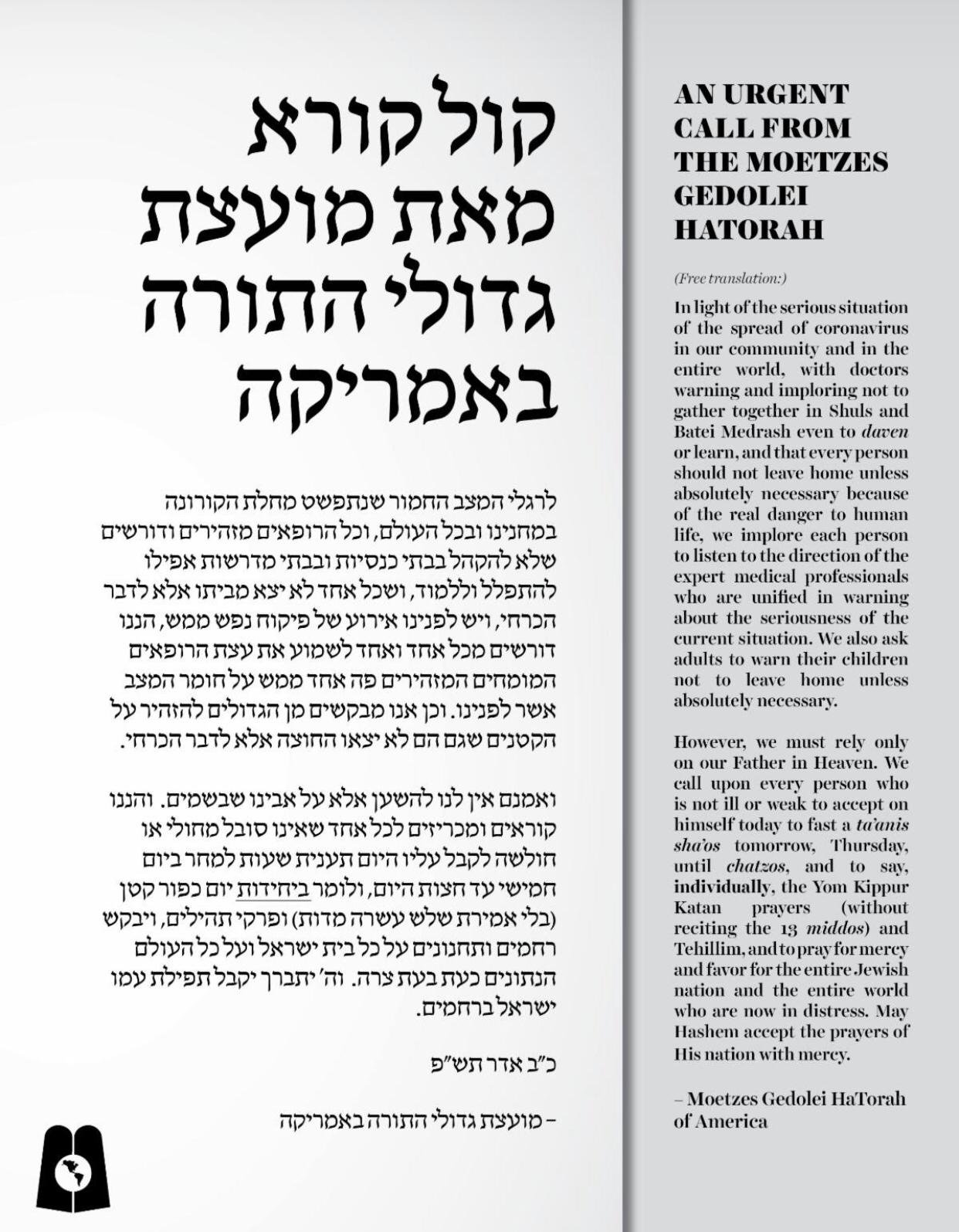 1 Response to (Not) Closing Haredi Yeshivot (Letters Responding to Coronavirus)