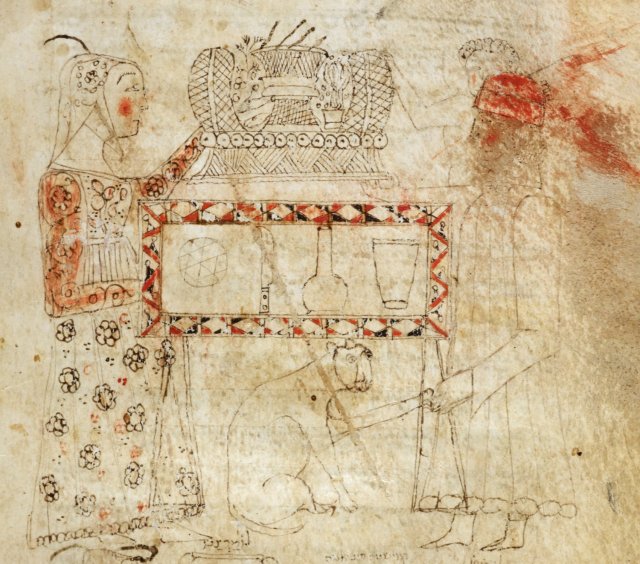 Pesach is almost done with this year but I wanted to share with my Talmud, art, and animal friends this charming little post from the amazing blogsite here at the Bodleian. These medieval illuminated images from the Haggadah are the rare graphic realization of a halakhic problem raised in the Talmud. What do you when you clean out all the hametz (leaven) out of the house, but there are mice who might possibly bring in a crumb of the now forbidden foodstuff from outside? Cats!!

In some medieval miniatures of Seder feast, feline creatures appear under the table at the feet of the celebrating family.

What do these animals do at such an occasion?

The Pesahim tractate of the Babylonian Talmud discusses at length what to do if a mouse runs into the searched house with a bread crumb in its mouth (bPes 10b). The question is if the house has to be searched again or not.

In the Second Nuremberg Haggadah, the cat itself comments on its task: “Behold, I bite the mouse, lest he eat the grain” (הנני נושך בעכבר פן יאכל את הבר). Another image on the same folio depicts a man pouring the content of a bowl into a big vessel. The caption says: “One hides the leaven and the grain, lest the mouse drag it away.” Thus it seems that cats are “invited” to catch mice which might bring in some leavened bread crumbs to the searched and already ritually clean house.

(“Behold I bit the mouse!” The reference above to this cat motto is from another image included at the post)

Zachary Braiterman is Professor of Religion in the Department of Religion at Syracuse University. His specialization is modern Jewish thought and philosophical aesthetics. http://religion.syr.edu
View all posts by zjb →
This entry was posted in uncategorized and tagged animals, art, Jewish art, Shabbat & holidays, talmud-midrash. Bookmark the permalink.