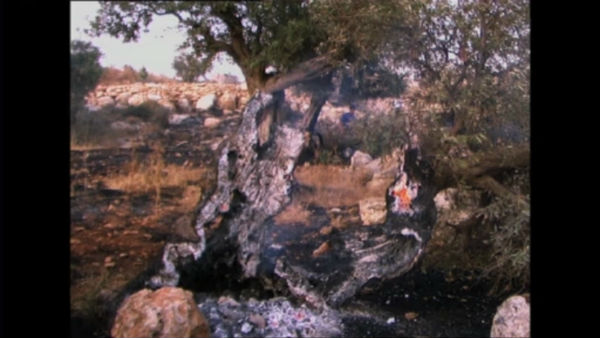 About the two new political films about the Occupation coming out of Israel, both of which were nominated at for an Oscar, the lion’s share of attention has gone to the Gatekeepers, less to 5 Broken Cameras by Emad Burnat with Guy Davidi. It could be that the latter is not as revealing as the former, which works at the macro-political level of security elites and decision-makers, whereas 5 Broken Cameras, now streaming at Netflix, presents its view from the ground up.

5 Broken Cameras only appears to be a straightforward narrative documentary of the demonstrations at the village of Bil’in in the West Bank in the mid to late 2000s against the routing of the separation barrier built by Israel through village lands and the taking of village lands to expand the nearby settlement of Modi’in I’lit. The title refers to the five cameras belonging to the filmmaker that were destroyed in the course of confrontations with soldiers during the filming of this material. Indeed, “the camera” is perhaps one of the most important components or even characters of the film. Moving through contested space, it is referred to at least once, if not twice in the film as having been “shot.” Critics of the film might complain, but to the camera, which is a technical apparatus, context doesn’t matter. Structurally, its perspective is more limited to a particular slice.

Without providing any historical context that might help “explain” why the separation wall and fencing was built in the first place in relation to “the situation” as a whole, 5 Broken Cameras gives you, instead, a glimpse at the micro-level of daily life in the West Bank under Israeli occupation. Israel advocates can complain about this as much as they want, but it’s really beside the point.

A.O. Scott in the NYT  called the film a “visual essay in autobiography and, as such, a modest, rigorous and moving work of art.” About this one need not be so sure. Visually, the film is mostly uninteresting. Idealized images of the land, and the image of the filmmaker’s young child as a symbol of the lost innocence of Palestine are flat and even clichéd. The most powerful single visual images are those of the still glowing white-hot cinder of burnt out olive trees destroyed by settlers. Far more interesting is the narrative structure built into the film, and the story of life in Bil’in as told by the filmmaker, a native son.

While the film is roughly organized according to the life span of each of the five broken cameras, it is easy enough to identify the conventional narrative structure composed of three segments.

[1] In the first half or so of the movie, everything is more or less “normal.” There is a pronounced ordinariness to the demonstrators and also to the soldiers they confront on a weekly basis. A clear choreography determines the interactions between the demonstrators and army. There is some not so-friendly banter, but the interactions are human in ways that are both tense and relaxed. Each confrontation concludes with a handful of tear gas grenades, lots of pushing, hitting. The rules of the game are understood, and the atmosphere is carnivalesque.

[2] The wheels start to come off an hour into the film. There are reports of more demonstrations across the WB modeled on Bil’in, of soldiers getting tense. Then things kilter out of control after the first killing at the nearby(?) village of Nil’in. Everything is now much more violent. No information is provided to account for the sequence of events leading up to the fatalities at these demonstrations. To the camera, it doesn’t matter. The soldiers are now faceless and more violent, filmed from a much safer distance. There’s lots and lots of tear gas, and live ammunition fire, reports of kids getting killed, and then the killing of Baseem Abu-Rahma (Phil or Pheel), one of the organizers of the demonstrations and a major presence in the filmmaker’s circle of close friends.

[3] In the last segment of the film, the wall is pushed back some ways from its original site under order from the Israeli Supreme Court. It’s a small and sad victory. The scars on the land remain. Burnat goes to Tel Aviv for final procedures to take care of a deep scar gashed down his torso that he suffered in a very serious car crash at the site of the barrier. In the final scene of the last segment, two of Burnat’s children who accompanied him to the hospital play in the sea. There are no longer any Israelis. The soldiers no longer inhabit the frame; even the doctors and staff filmed at the hospital are faceless; and there’s no one, not a single Israeli at the beach filmed somewhere between Yaffo and Tel Aviv. The ungenerous closing shot presents happy children with ominous melodies played in the background by an oud. The last words of the film speak to healing, to presenting the act of filming as a type of healing with only a tenuous sense of only a provisional closure.

For those who want or need it, I found helpful this information from the Betzelem website, especially as it parses the question of the non-violent nature of the demonstrations:

Bil’in is a symbol of the popular protest against the Separation Barrier. The weekly Friday demonstrations in Bil’in began in February 2005. At the same time, the villagers petitioned Israel’s High Court of Justice, filing their objections to the proposed route of the barrier, which would leave about fifty percent of the village lands west of the barrier. The route of the barrier was designed to facilitate the future expansion of East Matityahu, a neighborhood in the settlement of Modi’in Illit, despite the topographic inferiority of the route and in contraindication to security considerations. On 4 September 2007, the High Court of Justice accepted the position of the village’s residents, declaring that the route does not satisfy the standards of proportionality. The court instructed the state to consider an alternate, less injurious route. Despite this court ruling and another ruling handed down on 15 December 2008 that declared that the alternate route proposed by the state did not comply with the criteria set by the court, a long delay ensued in moving the barrier. Work began only in June 2011. The demonstrations in Bil’in have not ceased despite the adjusted route because it still leaves 1,500 dunams [150 hectares] of village lands west of the barrier. The Israeli military classifies the demonstrations in Bil’in violent disturbances of the peace, whereas the residents say the demonstrations are an unarmed, popular protest. Protesters taking part in the actual demonstrations are usually not violent. However, youths often throw stones near the demonstrations. On 17 April 2009, Bassem Abu Rahma, 30, was killed during a demonstration against the Separation Barrier in Bil’in. He was hit in the chest by an extended-range tear gas canister.

As a film, Burnat’s “documentation” is less antiseptic. What you get from the film, I think, is not so much historical or macro-political information. What you get, in addition to the  story, is visual information scaled much more modestly. This is what the Occupation looks like from a Palestinian perspective –the human face of villagers and soldiers, fathers and sons, almost never wives and daughters, and when things go off kilter, faceless soldiers filmed from a distance and demonstrators shot from a distance, and children being arrested; some blood, some death and a lot of soil all amid a shabby, painstakingly worked, rocky landscape and built structures, chief among them being the village, the barrier fencing, and dusty construction sites at ugly settlement blocs that are alien to their immediate environment. This is what occupied Palestine looks like at the bottom, and this is what Israel looks like viewed from the underside up. The film tries to put up the heroic face of resistance. I’m not sure, but was that the point behind the film, to mobilize solidarity? By the end of the film, everyone looks simply exhausted and drained out; the whole mood remains unhappy, its misery barely contained for the meantime.

Zachary Braiterman is Professor of Religion in the Department of Religion at Syracuse University. His specialization is modern Jewish thought and philosophical aesthetics. http://religion.syr.edu
View all posts by zjb →
This entry was posted in uncategorized and tagged Burnat, film, Israel, Palestine. Bookmark the permalink.