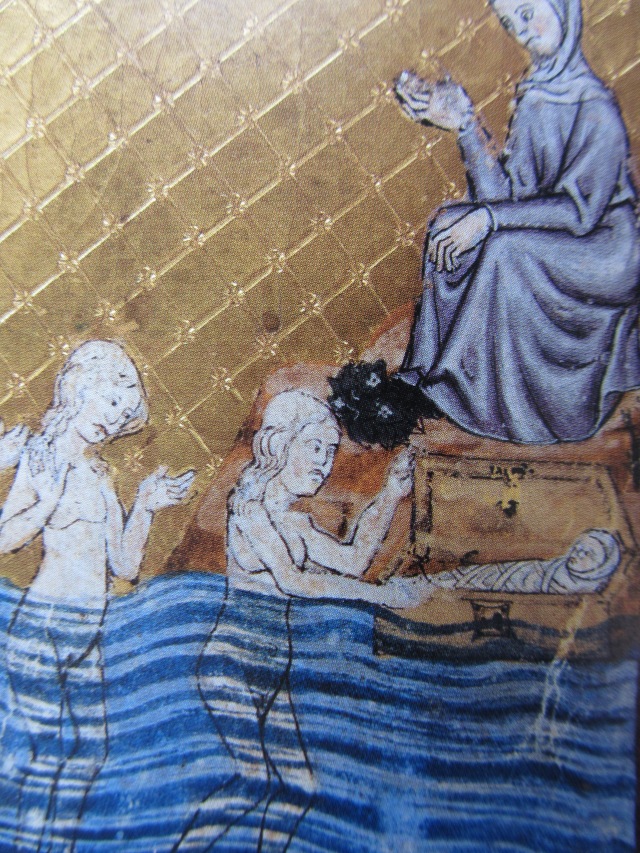 I’m not sure I’ve ever seen so much illumination of the Hebrew Bible or so many women in any other Hebrew manuscript; about this, there seems to be no inhibition.  Once more, Marc Epstein is my guide to the illuminated Jewish page, drawing attention to the extraordinary number of images depicting women in the eight cycle of illuminated folia pages of the so-called Golden Haggadah, whose origin is  possibly Barcelona, between 1320 and 1330. As a whole the women represent maternity, here meaning the death of children and the precarious life of a people. Epstein speculates that the Golden Haggadah may have originally been commissioned for a woman, which kind of makes sense, given what is, indeed, what is for the Haggadah the unusual proliferation of women, starting with the text’s frontispice image.

Here are Epstein’s closing remarks about this “hiding of women in plain sight” in the Golden Haggadah: “The images of the redemptive suffering of women mourning for lost children, as well as those of women and children leading the Exodus, and the final image of preternatural fertility may thus have represented a sort of visual prayer on the part of those who commissioned the book for the use of its first owner –possibly a woman called Rachel –for recovery and reinvigoration  after what may have been a profound and painful loss for her” (The Medieval Haggadah, p.200).

I like how in the image of the Exodus, the men look to God in prayer and the women look to the woman with the baby, and how, likewise, at the Red Sea, Moses looks to the Egyptian soldiers drowning in the sea, while the people around him look to the woman with the baby. The pictures and Epstein’s analysis remind me of the focus on mothers and children by Emil Fackenheim writing about Exodus in his late and lovely little book on the Hebrew Bible after the Holocaust. The human versus theological priorities are presented very clearly, and it’s gender that makes the difference.

Zachary Braiterman is Professor of Religion in the Department of Religion at Syracuse University. His specialization is modern Jewish thought and philosophical aesthetics. http://religion.syr.edu
View all posts by zjb →
This entry was posted in uncategorized and tagged art, Bible, gender, Jewish art, Judaism, Shabbat & holidays. Bookmark the permalink.