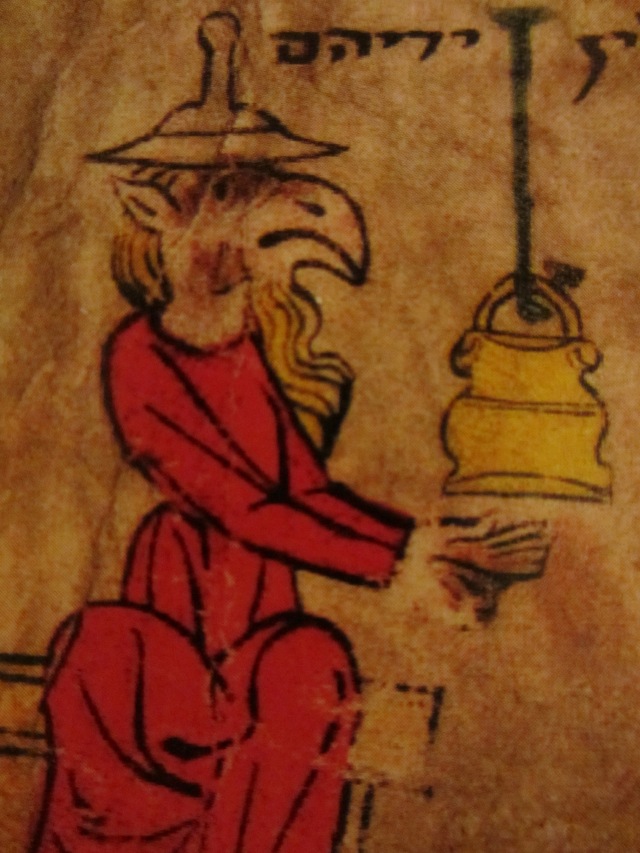 I never knew what to make of the figures in the Birds’ Head Haggadah until I read Marc Michael Epstein’s recently published The Medieval Haggadh: Art, Narrative, and Religious Imagination. First of all, and perhaps most obviously, the birds are all Jews. Insofar as they appear in the Haggadah, Egyptians and angels are presented as faceless humanoids. I don’t think any of this has anything to do with the 2nd commandment’s putative prohibition against figurative representation. The plethora of ancient and medieval art with fully realized human figures should be proof that pre-modern Jews were nowhere near or not always as anxious of representation as modern Jewish philosophers writing in the wake of Lessing and Kant. Epsteins’s sense is that this Haggadah, dating back to Mainz, Germany in the 13th century  and rooted in Christian-Jewish polemics, was a product of a pietistic society.

Epstein identifies 3 clusters of images: [1] historical, relating to the parting of brothers, Jacob and Esau, slavery in Eygypt, [2] polemical-apologetic, relating to the abiding spiritual efficacy of the Passover sacrifice, in time and through time, as well as relating to the  manna, it looks like eucharist, and the preparation of matzah, [3] eschatological vision.

So what’s with these birds, these Jewbirds, with their blond hair and beards, and the infamous Jew-hat worn only by high-status birds? Epstein is pretty sure that they are griffin-like figures, combining bird and lion-like features showing swiftness and boldness, emphasizing  “the connection of Jews with the divine,” numinous and mysterious beings (p.57, 55). The Egyptians and the angels are one-dimensional beings, according to Epstein. “Their visible apparent manifestation is their only reality there is nothing beyond it. The Jews in the manuscript, however, are represented with countenances that reflect not their visible apparent reality,  but their (cherubic) inner nature” (61).

Zachary Braiterman is Professor of Religion in the Department of Religion at Syracuse University. His specialization is modern Jewish thought and philosophical aesthetics. http://religion.syr.edu
View all posts by zjb →
This entry was posted in uncategorized and tagged animals, Bible, Jewish art, Judaism, Passover, ritual, Shabbat & holidays. Bookmark the permalink.