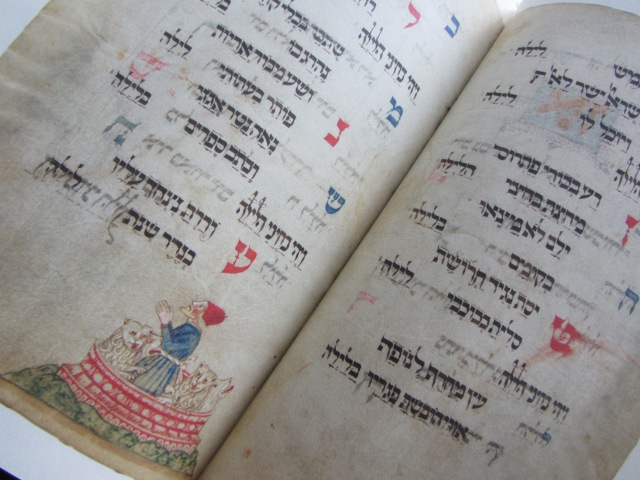 David Stern explains the difference between the medieval Sephardi versus Ashkenazi Haggadah has having to do with the difference between a more group-national perspective versus a more domestic scale. You can see this in the Golden Haggadah, the Rylands Haggadah, and the Brother Haggadah, on the one hand, and the Birds’ Head and Washington Haggadot. Where the former take the Bible scenes and the collective story of the people Israel the latter devote their pictorial attention to mundane domestic scenes relating to the Passover holiday such as the searching the home for leaven, preparing matzah, drinking wine.

A facismile edition of the so-called Washington Haggadah by the medieval artists Joel Ben Simeon has been published by Harvard/Belknap, which is where Stern’s essay appears, along with one by Katrin Kogman-Appel. It’s a beautiful thing, both the original manuscript reproduced, and the edition by Harvard/Belknap.

The illustrations are almost all domestic scenes with women and men. Some of the scenes are sweet, some more biter, like the image of the married couple, he’s shoving bitter herbs in her face, she’s holding a sword! Even the messianic is figured domestically, what with the familial riders on the donkey. The last figures are also individualized, these being David and Daniel, representing a more individual mode of piety and salvation.

What I think I like most about the Washington, apart from the sheer beauty of its presence is the way the Passover text is “figured” without metanarrative, or rather, without metanarrative dominating the foreground of the page, performance, or thought. The delicacy of the pen and ink work have been commented on as specific to Joel’s pictorial style, influenced it is supposed, by his sojourning in northern Italy. I’d draw this in contrast to the brutality of the Brother Haggadah, which I discuss below in a previous post. What this means for me, this lightness of hand, is the absence of the heavy hand and ethical seriousness that tends to bog down the Passover story and ritual. There’s a lot to be said for surface charm.

Zachary Braiterman is Professor of Religion in the Department of Religion at Syracuse University. His specialization is modern Jewish thought and philosophical aesthetics. http://religion.syr.edu
View all posts by zjb →
This entry was posted in uncategorized and tagged art, ethics, Judaism, Passover, Shabbat & holidays. Bookmark the permalink.