Thinking — The Banality of Evil – Hannah Arendt at the Movies 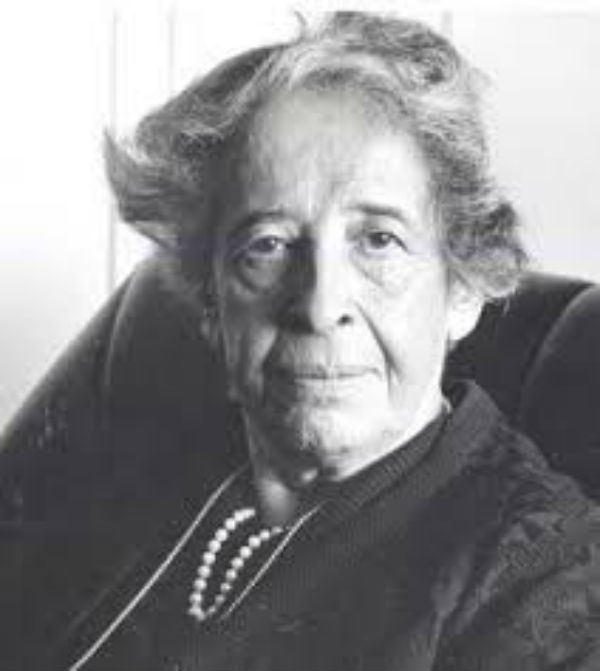 I’ll confess right from the start that I was disinclined to see the new movie by Margarethe von Trotta, starring Barbara Sukowa as Hannah Arendt. Not predisposed to either its subject and to the hagiography and apologetics surrounding her, I went pre-prepared to hate the movie but left mostly baffled and incredulous. I’m going to try to get this as right as I can, but I fear my disbelief is going to addle my judgment, not so much about Arendt and the Eichmann trial, about which I have written elsewhere, as much as about the movie and the movie’s depiction of them, and also about the conceptual persona of the movie — “thinking,” and since it’s mostly German language film, I can safely say “Denken” in order to capture von Trotta’s debt to Heidegger.

A lot of snarky stuff has been said by others that what “thinking” looks like in the movie demands lots of smoking and some lying around on a daybed with your eyes shut. So I’ll start off a little snarky too and make comment about the almost complete absence of electrical illumination in the New York City interior scenes. Almost none. It’s mostly natural light, dark ambient light. Electric light sparkles in the buildings in the semi-distance outside Arendt’s apartment windows. When I first observed this, I thought nothing of it, except to make a strong mental note. Reflecting back, I realize the lighting was not incidental to the film. This of course is an obvious point. Films are defined in their tonal constitution by light. In this case, I have no doubt the dark lighting was to make an anti-technological point ala Heidegger, whose presence looms throughout the movie –in the flashbacks to Arendt’s university days in Germany, to his photograph on her desk in Morningside Heights, and that emphasis placed by von Trotta in the movie on “thinking.” These are dark times which we are supposed to consider, Arendt’s time and our own.

Trying to set aside my own mental reservations, I’ll admit that the movie is well put together. But where and when it stumbles, it does so for reasons that are as cinematic as they are philosophical. For instance, A.O. Scott in his review at the New York Times wanted to draw attention towards and away from the fantastic attention to period details –the apartments and their furnishing, the ashtrays, the clothes, and the rolodex at editor William Shawn’s office at the New Yorker. I liked very much the realization of Germany in the 1920s, and of the United States and of Israel in the 1960s. These are the scenes that draw the viewer into a compelling cinematic time and space, increasingly distant from our own, and it’s the capacity to create this kind of time and space that lends the Hannah Arendt its charm. These domestic interiors I found more interesting than the attempt to re-present the domestic life of the movie’s subject, an emphasis in the film that runs badly against the grain of Arendt’s own political thought.

As cinema, the more significant example of temporal disremption in the film is internal to the structure of the film. It’s a remarkable feature to the film, but also its main false move. In a film where all the primary historical actors are cinematically realized (i.e. played by actors), in the Jerusalem courthouse, the camera moves back and forth between staged cinematic time and space actual historical footage of Eichmann and his accusers. At first you’re taken by this little bit of cinematic innovation. The historical footage is amazing, and you are given to see Eichmann close-up and projected on a large screen. And then I thought, very quickly, that something’s not quite right. There’s what looked to me like a very bad cut between a shot of the Eichmann footage and a shot of Sukowa and other actors in the court observing the proceedings. It was the only shot of Arendt in the courtroom, as opposed to sitting in an annex reserved for journalists, so it drew my attention. There was something about the shift from black and white to color that didn’t look right. The color struck me as pale.

I mention this shot because it was at this point in the film that I realized that Eichmann never gets acted in this movie, i.e. acted by actors. Ditto regarding survivors, and ditto for the heads of the Jewish Councils judged without mercy by Arendt in Eichmann in Jerusalem. And this absence actually pulls the movie at its seam. Against its own philosophical grain, it is as if to concede that some things cannot or should not be represented, cannot be thought, not radical evil, not even the “banality of evil.” It’s a failure of cinematic nerve. If you are going to make a movie, with actors acting in cinematic time and space, then I don’t understand how one can omit acting out the role of such central protagonists as Eichmann, et.al. The historical footage is left to say it all because the director does not know how to, or for some reason does not think that these figures are actual protagonists to the story she wants to tell about Arendt, Eichmann, and the Eichmann trial.

It’s at this point that the whole movie wobbles in ways that go beyond a failure of cinematic nerve. What I am unable to grasp are the peculiar notions that Eichmann and others like him were mere cogs who did what they did, not because they believed in or thought about what they were doing, but only because they were dull nobodies thoughtlessly following orders. This is a Heideggerian conceit this indictment against mass society and instrumental reason; and an anti-democratic one at that. Watching the historical footage of Eichmann at the movies, I found myself failing to believe it, not for a minute. Nor can I quite believe that Arendt herself actually based her judgment about Eichmann and the banality of evil on the grounds of Eichmann’s sworn deposition, the deposition of a man who was lying through his teeth, and whose word there was never good reason to take at face value.

My guess is that Arendt was failed to think the shift in scale from the attention given to systems and bureaucracies in The Origins of Totalitarianism to individual case studies at Eichmann in Jerusalem. Nor do I think Arendt could have believed what she said about Eichmann and about the heads of the Jewish Councils or why von Trotta seems to believe this without preconceived notions of ordinary men and women, mass society, and what it means to think. In the film, ordinary people don’t understand Greek so presumably they cannot “think.” They are friendly African American doormen and porters. Outside the Jerusalem courthouse, they are glued thoughtlessly to their radios (except for a couple of Hasidic passerby). They are small minded New York Jews, inside and outside of the academy, driven by combinations of snit and rage. In the film, even Arendt’s friends Hans Jonas and Kurt Blumenthal can only turn away from her in anger and in grief, but with no real argument. But then, I’m unsure how this is supposed to square with the picture of Arendt’s students, those brightly scrubbed ephebes, who in a final scene, burst out all together in applause after she has stirringly defended herself and the dignity of thought against her persecutors and against the darkness outside Arendt’s windows.

The movie wants us to think. But what are we given to think? The movie points its viewer to the clarion call to individual moral conscience over against mass society. But it left me wondering why anyone takes intellectuals so seriously. Is it perhaps the case that Arendt overthought her thesis, basing it on an exaggerated sense of the individual thinker’s ability to “think” and to render truthful judgments. What I’m left considering is that, in fact, Arendt got Eichmann wrong, that Eichmann, in fact, put a lot of “thought” into his role in the Final Solution; and that Arendt, who despised passivity, was in no position to assess the actions of the heads of the Jewish Councils. Arendt’s courage is one thing, her judgment another, about Eichmann as well as the Judenrat. But can philosophical thought stand up to reality in its brute ontic factiitey? Does the world of values embodied by Arendt crumple into hagiography and cinematic cliché? Has the movie made sense of the world, and on the basis of what axiological principles? Did Arendt? Are we asked by the movie to ask these kinds of more critical questions or simply sit, like Arendt’s students, in rapt assent?

The closing shots are two. Arendt back in her dark apartment, lying on the daybed. She smokes, she “thinks.” And then the camera pans out to include the New York skyline across the Hudson, at night. At first I did not understand this last closing shot, but I think I know why. It has to do with Heidegger. The New York skyline represents technology, mass society, and “mass man,” inauthentic human existence, as underscored by the brooding electronic music, perhaps a German film director’s fancy that America represents the new threat to human thought and moral conscience in what are supposed to be new dark times, just as dark as the Nazi-time.

Zachary Braiterman is Professor of Religion in the Department of Religion at Syracuse University. His specialization is modern Jewish thought and philosophical aesthetics. http://religion.syr.edu
View all posts by zjb →
This entry was posted in uncategorized and tagged Arendt, cinema. Bookmark the permalink.