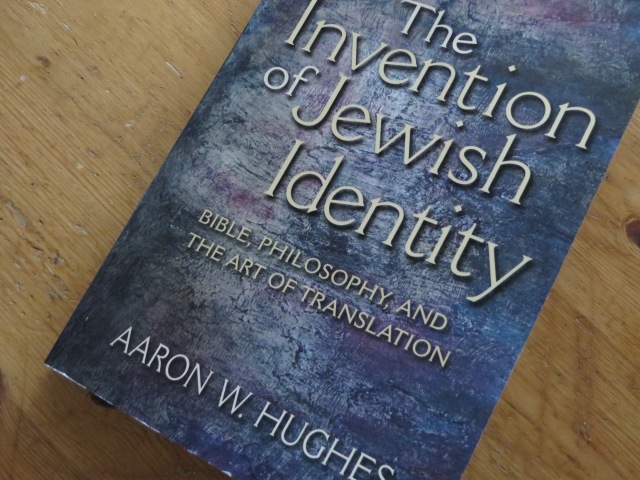 I finished reading Aaron Hughes The Invention of Jewish Identity: Bible, Philosophy, and the Art of Translation a couple of weeks back, and have been struggling to come to some kind of conclusion about the book. It turned out not to be so easy, I think, because the book is about many things at once, temporal and ontological frames, translation and culture, history and anti-history, the Hebrew Bible and Jewish philosophy. What’s truly tricky about The Invention of Jewish Identity is what I believe to be a fundamental tension between an exoteric baseline discussion of time, temporality, and history, on the one hand, and an overriding and esoteric anti-historicism as that which resists time and temporality, on the other hand.

One of the hallmarks of Aaron’s work as a whole seems to me to be the way in which Aaron consistently and with superlative intelligence works to push the practice of Jewish thought and philosophy across what would otherwise be conceived as neatly reified cultural and historical boundaries.  The Invention of Jewish Identity is no exception. We are given to understand how translation constitutes the mediation of Jewish spaces and non-Jewish spaces and the transmission of idea across temporal frames that are both continuous and discontinuous. Any and all claims to “authenticity” are immediately brought short. All reality is mediated by language, and language is mediated by time and by history as artificial constructs of human imagination. This line of argument constitutes the surface meaning of Aaron’s thinking here.

And then there’s the more esoteric stuff, indebted to Elliot Wolfson, a lot of Heidegger at play in Aaron’s understanding of ecstatic temporality, the way in which translation overcomes the limits of historicist consciousness, unveiling worlds, and the being of worlds, freeing the past and setting it loose towards the future. So as much as translation is immersed in time and history, translation also becomes the key with which to resist time and temporality (128). For Aaron, translation is a kind of poetic thinking that arcs towards a “language beyond language,” towards what Aaron wants us to hear as the “silence in language” (134). This silence is a visible figure. Watch out for the word “glimmer.” It appears about 10 times throughout the book. The glimmer that translation is supposed to index might be the glimmer of Hebrew, whose distant phenomenality appears as a trace presence out there and distant, always just out of reach (109). This glimmer persists not as the foundation of an authentic origin or core of meaning. There’s no something deep or authentic here –just the appearance of “still life on a moving landscape” (129-30).

There are few indeed who understand as well Aaron the chimera-like and texture-like character of Jewish philosophy. But if I were to turn away from the apophaticism that marks Aaron’s project, it would be to follow the more aesthetic and less ascetic path of Moses ibn Ezra. And I would do so with a less guilty philosophical conscience, unperturbed by the problem of reification or the facticity of death. Aaron remains troubled about translation insofar as translation threatens to obscure either the polysemy of the Hebrew Bible or its deeper philosophical truth. As a kind of idolatry, translation threatens to turn the revelation promised by the Bible (and by philosophy?) into a crystallized and one dimensional form (134, 65). I think that’s what drives the desire on Aaron’s part to reduce the language and the images of the biblical text into the glimmer of silence, the loosening of form from material, which in the medieval philosophical imagination, is the quintessence of death.

Stepping back from all this, what troubles me about the apophasis here is the remark, a paraphrase of Maimonides, according to which in “our created world” there is “only” “ephemerality, instability, and death” (66). I could propose instead that if there is more to creaturely life than ephemerality and death than maybe there is no reason to disavow philosophically the babble of tongues or the crystalized form of an anthropomorphic image. This babble and these crystal shapes constitute as much as they cover the life of the text, its revelation and transmission, both culturally-historically and phenomenologically-ontologically. There would be, then, no necessity to try with words or with pictures to “point” to the languageless source of all language (134) or to the imageless source of images, to translate these into words and images, if, perchance, it is language and images all the way down. With Aaron I agree that there is no core to any of this if only because each crystal part stands out as a glimmering core in its own right.

Zachary Braiterman is Professor of Religion in the Department of Religion at Syracuse University. His specialization is modern Jewish thought and philosophical aesthetics. http://religion.syr.edu
View all posts by zjb →
This entry was posted in uncategorized and tagged Bible, Jewish Philosophy, Judaism, what i'm reading. Bookmark the permalink.