Immortal Body at Rest in an Ancient Chinese Techno Case

Undoing the mortal coil, here’s a little something for the Transhumanists. Lying as if suspended in the inside darkness of a tomb, the intricate layering of encasing jade plaques has the power to protect and to transform the body and soul of Dou Wan, wife of Prince Liu Sheng. Now on view at the Metropolitan Museum of Art in Age of Empires: Chinese Art of the Qin and Han Dynasties (221 B.C.–A.D. 220). Now brought into the exhibition space of the museum, has this thing, both body and object, retained its sense of aura? Does that aura have anything to do with the abstraction of the human form, it’s encasement into geometrical pieces, and a concomitant lack of organic liveliness as a mineral quality? 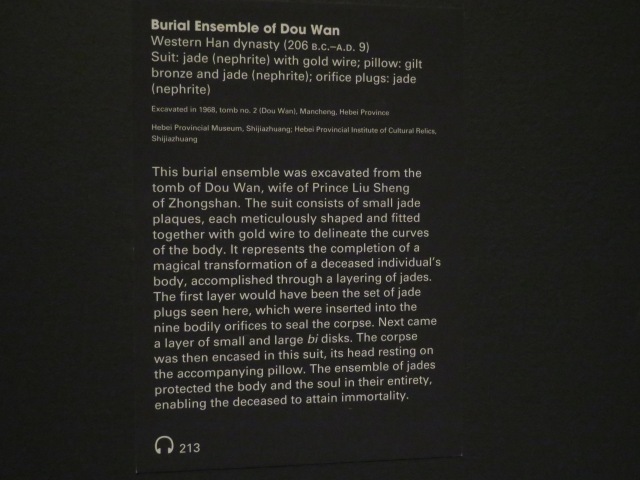 Zachary Braiterman is Professor of Religion in the Department of Religion at Syracuse University. His specialization is modern Jewish thought and philosophical aesthetics. http://religion.syr.edu
View all posts by zjb →
This entry was posted in uncategorized and tagged art, body, China, Museums & Galleries. Bookmark the permalink.