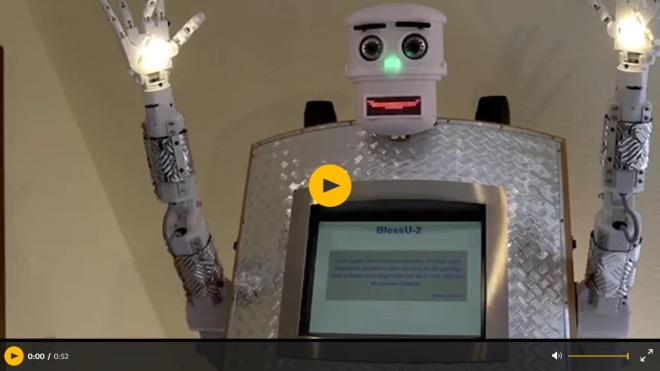 AB, a graduate student in the Department of Religion at Syracuse posted this article about BlessU-2, which you can read here.  You can watch the video there. This robot is programmed to invoke the Levitical priestly blessing from Numbers 6:24-26. “The Lord bless you and keep you; the Lord make his face shine on you and be gracious to you; the Lord turn his face toward you and give you peace.” As s/he raises its arm, the hands brighten up with a white light. An English language version, which I saw on Youtube, does not convey the same commanding authority as it does in German. The more mobile Buddhist robot monk, which you can see here, does some of the same work.

On a serious note, what these robots do pedagogical and theoretical work. As explained in the Guardian article about BlessU-2, the purpose of the robot monk is to provoke public curiosity about the church, to draw people towards it. A human monk makes the same point about the Buddhist robot monk. Clearly, robot religion is of a piece with the pedagogical function of religious art in ritual settings. Theoretically, these religious-robots bring up questions about the human, about human and machine interactions, about the difference between human presence versus machine presence, and about the importance and/or non-significance of intentionality in the performance of religious speech acts and the creation of religious effects. 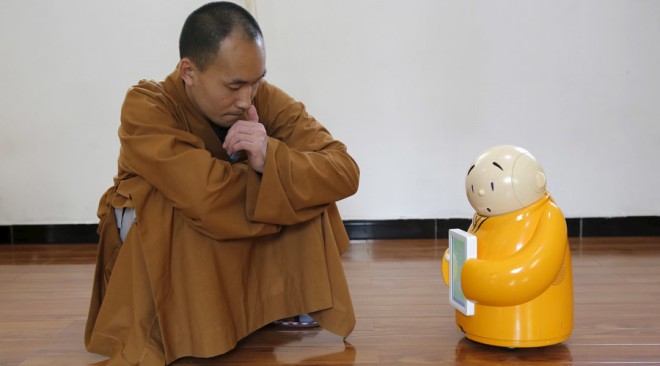 Zachary Braiterman is Professor of Religion in the Department of Religion at Syracuse University. His specialization is modern Jewish thought and philosophical aesthetics. http://religion.syr.edu
View all posts by zjb →
This entry was posted in uncategorized and tagged religion, technology. Bookmark the permalink.