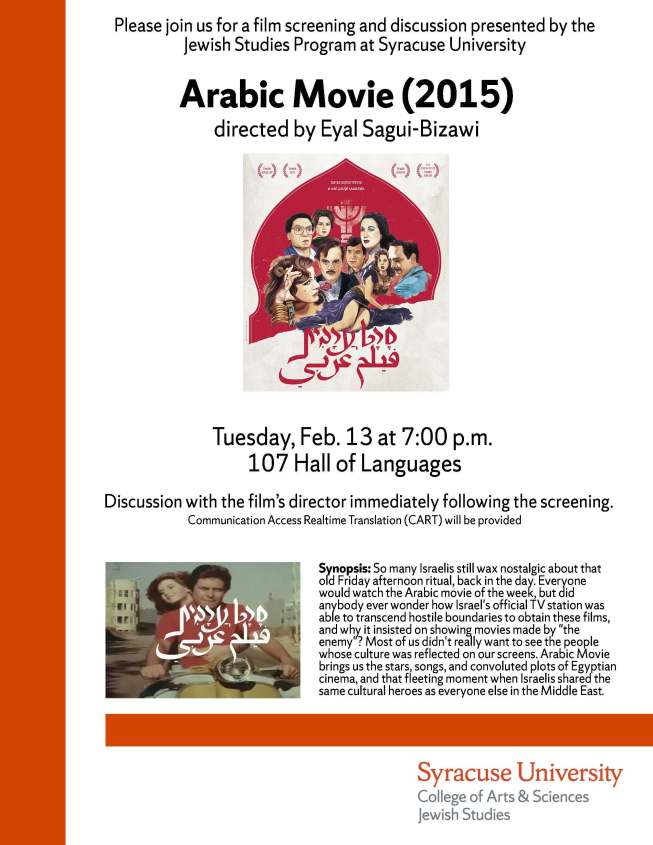 The Jewish Studies Program at Syracuse was delighted to host last night a screening of Arabic Movie (2015) and conversation with filmmaker Eyal Saguui-Bizawe. The movie explores the institution of the Friday afternoon “ceremony” of watching what was called “Arabic film,” i.e. Arabic language movies, primarily Egyptian cinema, shown on Israel’s state television during the 1970s and 1980s. The movie addresses the porous cultural borders, a special place of Arabic culture in Israel, and perhaps the place of Israel in the Middle East. Arabic Movie is steeped in multiple layers of affect and nostalgia –[1] the richly saturated and pining musical emotionalism, the facial and gestural expression in classical Egyptian cinema, [2] the deep feeling that registers on the part of the older Israeli viewers who appear in the film, particularly those who came to Israel from Egypt and other Arab speaking countries; there is a deep emotion that registers on the face, on the faces that tear up watching these movies and listening with their beautiful soundtracks, and [3] then finally upon our feelings as viewers of the film watching the on-screen viewers watching “Arabic movies” and thinking of possibilities of contact that break down or get past toxic cultural stereotypes that determine the barrier set up by the friend/enemy distinction. Arabic Movie is itself an “Arabic movie,” i.e. a primarily Hebrew-language Egyptian Israeli movie that is itself steeped in the warm ambience of the original films as they are remembered in the imagination and then carried forward in their re-watching.

Zachary Braiterman is Professor of Religion in the Department of Religion at Syracuse University. His specialization is modern Jewish thought and philosophical aesthetics. http://religion.syr.edu
View all posts by zjb →
This entry was posted in uncategorized and tagged cinema, Eyal-Sagui-Bizawe, Israel, Jewish Studies. Bookmark the permalink.