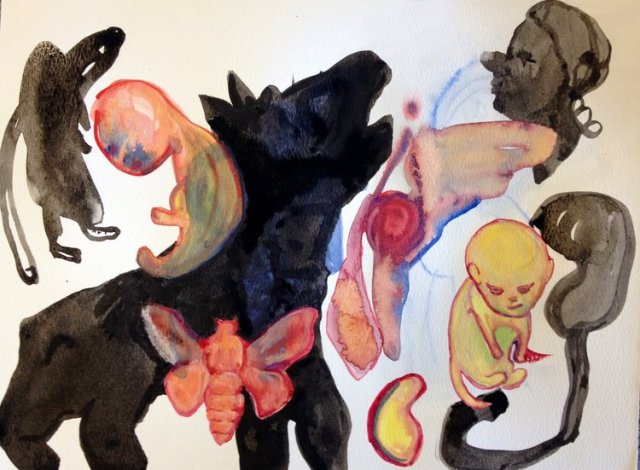 Jewish Studies can use a lot more theory, but theories, especially new ones, are only as good as they work. They need to be tested on stuff. Do theories call attention to material and draw it out in ways that would have been impossible without them? Theories should also picture well. Reading posthumanism, animal studies, and new materialism, Rachel Neis is writing about embryology and animals in the Mishna. You can read all of “When Species Meet in the Mishnah” here at Ancient Jew Review. I’m posting below an early paragraph and the last paragraph to give you a “taste.”

This attention to the nonhuman is not, of course, unique to these contemporary examples. Increasingly, we are finding scholars of late antiquity turning to questions of animality, materiality, and variation. My current work partakes in this turn while drawing on that of artists such as Taylor and Sfar, as well as of feminist science scholars and new materialists, to consider how questions of species intersected with theories of reproduction in antiquity. Late ancient people lived in a world in which the contours of the human were subject to instability and variation. Aristotle, the rabbis, Pliny, and Zoroastrian writers, knew that in a world populated by a plenitude of kinds, with variable and multiple technologies of generation, reproductive outcomes could be unpredictable. Humans, among other kinds, might deliver species nonconforming creatures.

To the extent that concerns about the human, species, animality, and reproduction criss-cross antiquity and the present, a species-informed approach to late antiquity not only allows us to hazard ways of thinking/being the non/human, it also can short-circuit rhetorical invocations of a “Judeo-Christian tradition” by falsifying cherished myths. The slippery gestatory and gustatory entanglements posited by the rabbis make for a world in which humans and nonhumans are saddled together, in life and in death, in stomachs and in uteri. These are other ways of knowing/being with the limits, ends, end, and propagation of human and nonhuman life.

Zachary Braiterman is Professor of Religion in the Department of Religion at Syracuse University. His specialization is modern Jewish thought and philosophical aesthetics. http://religion.syr.edu
View all posts by zjb →
This entry was posted in uncategorized and tagged animals, talmud-midrash. Bookmark the permalink.