Design Politics of Racism in Israel (2018) 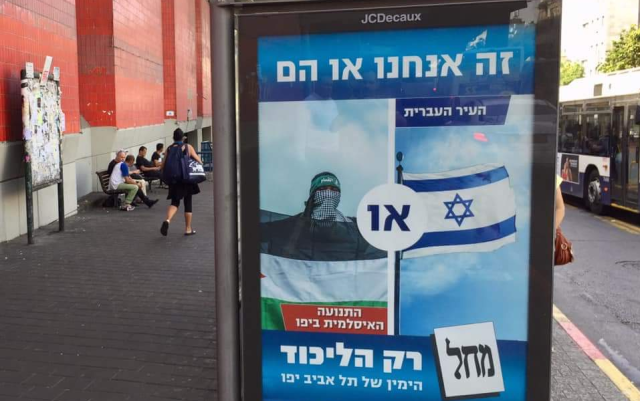 There is the racist content and the fascist friend/enemy crouch. There is evidence as to the way that religion, in this case, the religion of Judaism and the fear of Islam, is used to manipulate the political discourse in Israel, now dominated by the anti-democratic Jewish right. Also interesting about these posters for municipal elections in the town of Ramle and the city of Tel Aviv is that they are racist by “design.” Instead of crude graffiti of vandals, these are paid for by mainstream rightwing political parties, created by graphic design teams, distributed by an advertising company, and worked into the full view of the public sphere.

The text to the first image reads: There are hundreds of cases of assimilation in Ramle every year and no one cares. THIS COULD BE YOUR DAUGHTER. Only the Jewish Home Party can preserve/protect a Jewish Ramle. The Jewish daughter in hijab, the Shabbat table behind her.

The text to the second image reads: IT’S US OR THEM. The Hebrew city or the Islamic Movement in Jaffa. Only the Likud, The Right of Tel Aviv.

The third image shows the first image from Ramle destroyed. The posters were apparently taken down almost immediately. There, there is a price to be paid for the racism that reflects the current force of rightwing ethno-nationalism in Israel, one that forces a graphic split in the country on the basis of race and religion; in violation of democratic norms of equal citizenship enshrined in that country’s own Declaration of Independence.

Zachary Braiterman is Professor of Religion in the Department of Religion at Syracuse University. His specialization is modern Jewish thought and philosophical aesthetics. http://religion.syr.edu
View all posts by zjb →
This entry was posted in uncategorized and tagged Islam, Israel, politics, racism. Bookmark the permalink.