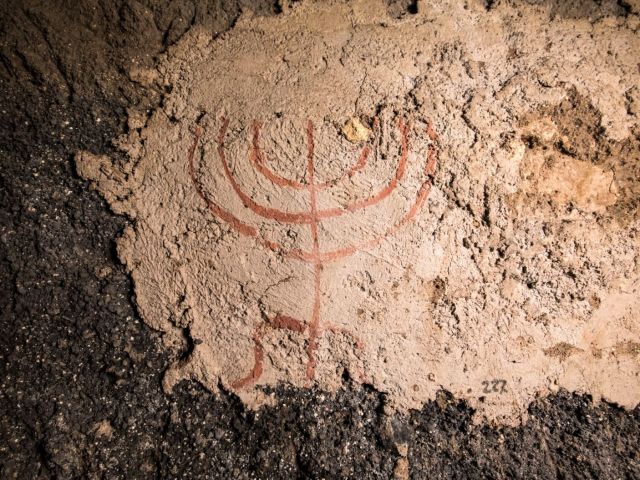 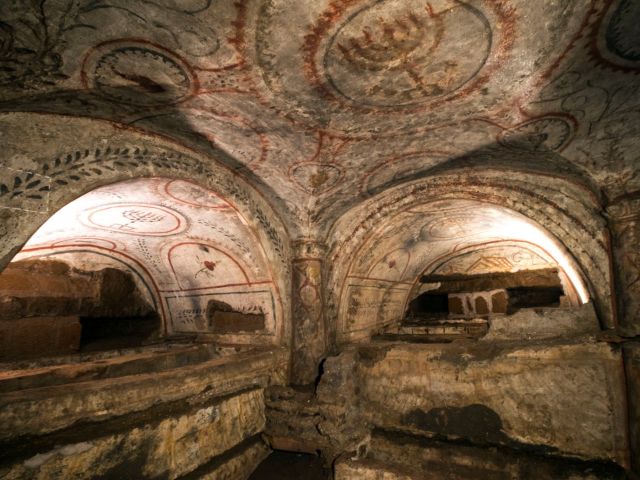 Apart from providing some historical background information, the best thing about this article in Haaretz which you can read here about the restoration work on the Jewish catacomb  in Villa Torloni concerns the conflict and compromise between the religion and science (human bones found at the site were re-interred according to Jewish law without forensic anthropologists being allowed to study them). Consider also how the article reflects (poorly) on the poverty of discourse in visual culture by archaeologists, vested as they are in the idea of “symbols.”

In this banal way of looking at things, a painted fresco has to be a symbol of “something,” if not of Jewish peoplehood, then relating to the destruction of the Temple, a communal tragedy. But is there anything doleful about this image, framed in by delicate decorative devices? No, the painted menorah in a Jewish catacomb is not a symbol mourning the Temple or standing in for Jewish peoplehood.

In significant part, the locus of the image (where it is placed) is what determines the meaning of the image. That means that the meaning of the image relates to death. Why else is it there? Like the original menorah from it was most likely modelled, presumably the famous menorah taken from the Jerusalem Temple and stored by the Romans in the so-called Temple of Peace where other war trophies were kept, this menorah in the catacomb is tucked away in dark space which only its lights illuminate.

In pagan, Christian, and Jewish catacomb art, the image signals piety, devotion, eschatological salvation. Setting aside the appearance of multiple menorot, maybe E.R. Goodenough was onto something when he speculated that the Menorah is, in fact, a symbol; not a symbol of Israel, but rather a symbol of God, “streaming Light and Law,” Tree of Life, the astral path to God, and the mediating female principle, the Mother” (Jewish Symbols in the Greco Roman Period [abridged version], p.113).

Zachary Braiterman is Professor of Religion in the Department of Religion at Syracuse University. His specialization is modern Jewish thought and philosophical aesthetics. http://religion.syr.edu
View all posts by zjb →
This entry was posted in uncategorized and tagged art, death. Bookmark the permalink.