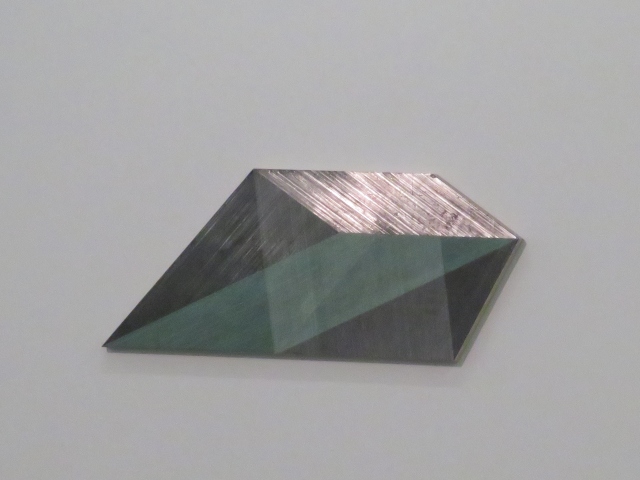 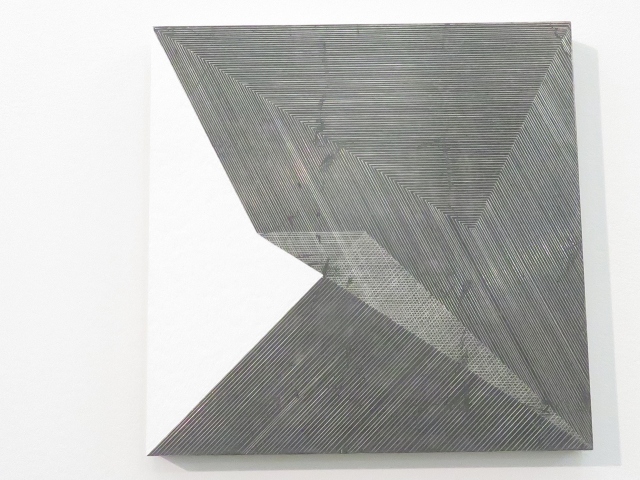 Wandering around Chelsea last summer, we stumbled into Marlborough Contemporary and got to see Palenville, a solo show by Yoshiaki Mochizuki. It was not immediately clear what these things are. Jewel-like things, they turned out to be paintings. They are painted on wood panels using layered gesso, burnishing clay, ink, pigments and precious metal leafing.  These layered surfaces are then scored, sanded, polished, and reflective. There’s something non-human about the way these things “feel,” about these things as they catch reflect back the light they catch.

(From a quick look at Wikipedia, I found that gesso is a white paint mixture consisting of a binder mixed with chalk, gypsum, and pigment or any combination of these. It is used in artwork as a preparation for any number of substrates such as wood panels, canvas and sculpture as a base for paint and other materials that are applied over it.)

Writing about another show by the Mochizuki, Taney Roniger connects these works to new materialism theory, non-human matter, the “confederacy of forces,” and so on. What she picks up is the vibrant vitality of the material. My own critical contribution to Roniger’s excellent analysis, which I’m quoting in full below, is that Mochizuki’s work highlights the degree to which this vitality is the effect of the human labor of the artist, exceptional and painstaking craft. Vital matter is more made than found.

“In the great chain of being, brute matter has never fared well. Cast as cold, lifeless, and dumb, denizens of the rock, earth, and mineral worlds have long occupied the bottommost rung on the ontological ladder—a ladder that, having been fashioned by us, naturally has human beings somewhere at the top. While new materialist philosophies are slowly tipping the scale on its side by exploring the subtle vitality inherent in matter, many artists are engaging with materials in ways that render this cultural shift concrete and experiential. Yoshiaki Mochizuki, who before coming to art worked as a buyer of loose diamonds, is one of them—and one whose intimate knowledge of that formidable crystal endows his work with singular power. In his latest show, twelve paintings made with the artist’s signature burnishing technique charge the gallery’s light-filled space with matter-in-action, and, in their relational complexity, urge us to reconsider some of our most entrenched assumptions about the nature of human agency.

Matter is anything but brute in Mochizuki’s work. Entering the gallery, it quickly becomes clear that the dark, deceptively minimal works punctuating the walls are in fact exquisitely crafted accretions whose jewel-like surfaces come to life as one moves through the space. While stony hues and shimmering metallics predominate (the artist works only with natural materials such as clay, graphite, and metal leafing), specks of richly pigmented inks flicker here and there like fragments of gemstone embedded in shale. Throughout, dense patches of burnished and incised lines overlap to form irregular geometric shapes suggestive of geological strata, their variously reflective surfaces appearing or disappearing relative to one’s viewing angle. To move around the pieces is to experience a shifting kaleidoscope of visual events whose entirety is inapprehensible from any one position. Rhythmic and fugue-like, this is work that unfolds in time, its imbricated facets being just as temporal as they are spatial. Rich, resonant, and deeply mysterious, the sound it evokes is that of geologic time: a score we know only dimly and that largely transcends us.

While allusions to the non-human world are a pervasive refrain, Mochizuki’s work is never without human presence. A distinctive feature of his surfaces, which result from a complex process of sanding, polishing, and otherwise abrading, is their persistent invocation of the viewer by way of reflection. In Untitled 4/1 (2015), for example, the ghostly image of one’s gazing figure looms conspicuously across the painting’s granite-like surface, the latter’s distressed texture resembling an abandoned mirror being slowly reclaimed by the elements. The effect is both unsettling and stirring. Seeing oneself obscured, abstracted, and set back into the depths of the material elicits an uncanny feeling of partial self-recognition. But you’re never there alone. With a particularly subtle use of visual metaphor, Mochizuki always hangs his paintings at his own height of five feet, nine inches. All relatively small in scale (the largest in this show is twenty-by-twenty inches), the paintings become surrogates for the artist’s head: dense compressions of organic matter teeming with vitality and actively engaged with the full manifold of their surroundings.

This interweaving of human and nonhuman gives Mochizuki’s work a relational complexity rich in consequence (quite aside from its special resistance to capture technology). With so many active forces involved—the dynamic capacities of the manipulated materials, the works’ placement relative to the spaces they occupy, the mobile body of the viewer amid the shifting conditions of ambient light—a question arises: Where, exactly, is the work? If the work can’t be located in any singular (or fixed) source, it can only inhere in the relations themselves—in the dynamic and open-ended field of interactions between participating agents. It is a recognition both perceptually thrilling and steeped in significance. For if this is true of Mochizuki’s work, is it not true of human agency as well? Are we ever really separable from the confederacy of forces that act on, in, and through us while we act on, in, and through them?

If Mochizuki’s work is a testament to the generative potential of matter and our fundamental interrelatedness with it, it is also a potent reminder of our utter infancy on the planet. After all, the diamonds we covet precede us in existence not by millions but by billions of years. It’s a humbling thought, and one that cannot have been lost on someone who’s spent countless hours in their presence. One imagines that while gazing deeply into these structures trying to distinguish impurities from the dazzling constellations of their mirrored reflections, Mochizuki might have had a further insight: perhaps the reason we can have such a profound response to matter isn’t just that we’re related to it; it’s that we are it. With its extraordinary beauty and depth, Mochizuki’s work offers an experience in which this might occur to us too—not consciously, but somatically, deep inside the very minerals and molecules of our being.”

And here is the artist’s statement:

“In my paintings, I build up layers that coexist rather than having a top layer dominate those beneath. One of the layers might consist of burnished lines without color, while another might be scratched with lines that reveal the white gesso below. The burnished lines do not hide the underlying color; they create a kind of polyphonic effect on the surface. Each layer looks different depending on the angle from which you see it. In most cases, what looks like a layer is in reality just a constellation of lines, but I call them layers because they are spread all over the surface. Direct experience of the work is indispensable for really seeing it. I accentuate the complex, textured surfaces of my paintings and the reflections they create, as well as the surrounding space, in order to emphasize (and remind the viewer) that my painting is meant to be an experience, one requiring time, bodily movement, and repetition.

The animating element “in” these objects would be the combination of bright gesso, the layering, and then, the critical act, the scoring of the material with a needle. The scored line draws in the eye as much as it does the light.

Zachary Braiterman is Professor of Religion in the Department of Religion at Syracuse University. His specialization is modern Jewish thought and philosophical aesthetics. http://religion.syr.edu
View all posts by zjb →
This entry was posted in uncategorized and tagged art, Museums & Galleries, object, Yoshiaki Mochizuki. Bookmark the permalink.