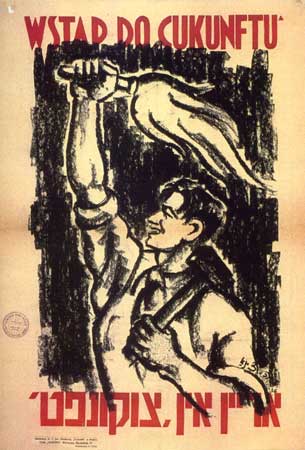 As the eight days of Hanukah draw to their final close, it’s an apropos time to think about the hagiography of heroes and militants in modern Jewish culture.  I’m posting this link which you can read here by Rokhl Kafrissen which was posted at Medium and which I found on Twitter. From her place on the contemporary non-Zionist (?) Yiddishist left, Kafrissen takes apart the idealization of the Bund by Jews today, especially on the Zionist-left who thrill to the memory of the Bund as representing a piece of the usuable past upon which to build a viable political alternative for Jews today.  Kafrissen suggests that this basis is paper thin, and provides a more careful historical nuance.

Referring to an essay by Molly Crabapple that was recently published in the New York Review of Books, Kafrissen writes,  “I read ‘My Great-Grandfather the Bundist’ with some alarm. This kind of zero sum, winners and losers approach to Jewish history only replicates the Zionist triumphalism many of us believe has squeezed out competing Jewish narratives. And therein lies the danger in writing personality driven corrective histories and the reason we must be so attentive to their appeal (and limits).”

Kafrissen’s own interest lies in the more complex position of the Bund in East European Jewish society and the inter-group tensions on the Jewish left. Regarding the latter, what determined the fate of the Bund historically and in Jewish collective memory was not just the antagonism between the Bund and Labor Zionism (which is the usual focus in much popular writing about the Bund on the Jewish left). What goes almost utterly ummentioned were those between the Bund and the Communist Party.

Her own concluding takeaway is this. “Bundists sought a way to integrate the best of Jewish life with a new political engagement. Its importance to us is its creativity, its struggle to synthesize a new way of being both modern and rooted in Jewish life. The anti-Zionism of the Bund emerged from that struggle and that time. It cannot be cherry picked out of its milieu, apart from the languages that formed it, apart from the political rivals that sharpened it. History’s gift to us is its bottomless depths, not its low-hanging conclusions.”

About my own post: The image above of the strapping young Bundist is of a piece with those young forward-looking muscle Jews familiar to students of early Zionist hagiography. The burning torch carried by him reminds me of old Hanukah menorahs with marching Maccabee figures holding the candles.

You can follow Kafrissen, a real deal Yiddishist, here at this truly exceptional blogspot, Rootless Cosmpolitan.