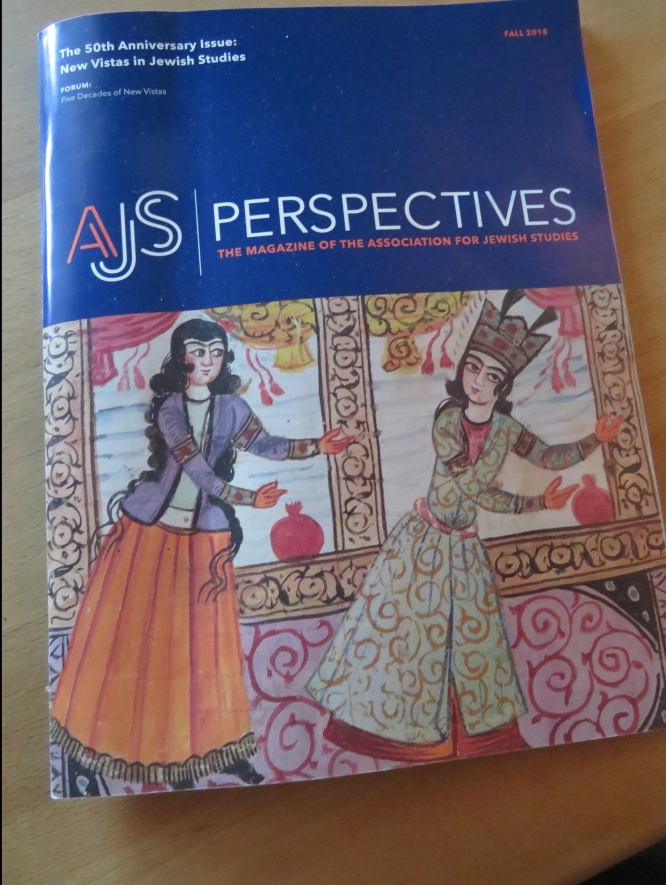 Themed around “New Vistas in Jewish Studies,” the 50th Anniversary Issue of AJS Perspectives is a delight to behold, both to see and to read. Billed as “the magazine of the Association for Jewish Studies,” its most recent issue was devoted to new and young voices in the field looking forward, and a decade by decade selection of senior scholars reflecting on the past going back to 1968. The new buzzwords draw on a vocabulary of space, place and visual studies: edge and center, east and west, “new vistas,” palimpsests, views from the middle, and so on.

And then, dear reader, my heart sank. Where was Jewish philosophy? Where was Modern Jewish Thought? So, yes, I am on the board of AJS Perspectives along with another colleague in Jewish philosophy and thought. And I was sorry to see how these two fields went entirely missing at the 50th anniversary issue as if they were non-existent and as if they never even were.

The only trace of philosophy and thought that I could find was was in the remembrance by Eric Meyers, “These Are the Beginnings” reflecting back on the AJS in 1968. A distinguished scholar of Biblical Archaeology at Duke, Meyers began wanting to pursue work in modern Jewish thought. Readers will find in this account a story about Nahum Glatzer telling Meyers that he would need to be able to do a bit of everything, including Bible, Second Temple sources, rabbinics, Zionism, history, and even Jewish art and archaeology (yes, even art and archaeology).

So what does the absence of philosophy and thought tell us about the AJS and leadership at the AJS? Is there something wrong with the AJS? Is the AJS not interested in “philosophy and thought”? Is the AJS not promoting it? One could walk away with that impression, but it would be unfair. Truth be told, philosophy no longer enjoys whatever prominence it once enjoyed in the Study of Religion either. It’s a trend. And yet, for all that, I would want to recall how important medieval and modern Jewish thought once were at the AJS in earlier decades. I would like to think that colleagues and friends might take note of the elision. The AJS is after all only a market of perspectives, so the onus is not on the organization. The onus is on “us” in Jewish philosophy and thought.

What then is “wrong” with Jewish philosophy and thought that we no one thought to include us in the anniversary edition? What are the wares we bring today to the AJS? Do the goods we bring attract the attention of our colleagues outside our own disciplinary section? Are there any buyers? Are we asking the right questions? Are we asking interesting questions, not questions that may or may not be of interest to us, but questions that might be of interest to others? Are we too narrowly circumscribed in our own historical or theoretical perspectives? Are we in need of new vistas? Is there any art of archaeology to what we do and to what we bring? Looking back, do we have anything like the range suggested by Glatzer some fifty years ago to an aspiring young scholar on the make? Perhaps the big question for “us” is this. Can Jewish philosophy and thought teach Jewish Studies?

I cannot and won’t speak of senior scholars in the field. I would rather put the onus on my own cohort of emergent-senior scholars, occupying tenured positions somewhere at mid-career and just after. For inspiration, I would look towards the section on the study of Talmud which has become one if not the most dynamic units at the AJS. To this I would add that gender has had something if not everything to do with the renaissance of that field, once considered moribund. Odd and a little screwy, that’s where the good questions are being asked. In other words, Jewish philosophy and modern Jewish thought should be more like Talmud.

Zachary Braiterman is Professor of Religion in the Department of Religion at Syracuse University. His specialization is modern Jewish thought and philosophical aesthetics. http://religion.syr.edu
View all posts by zjb →
This entry was posted in uncategorized and tagged Association for Jewish Studies, Jewish Philosophy, Jewish Studies. Bookmark the permalink.