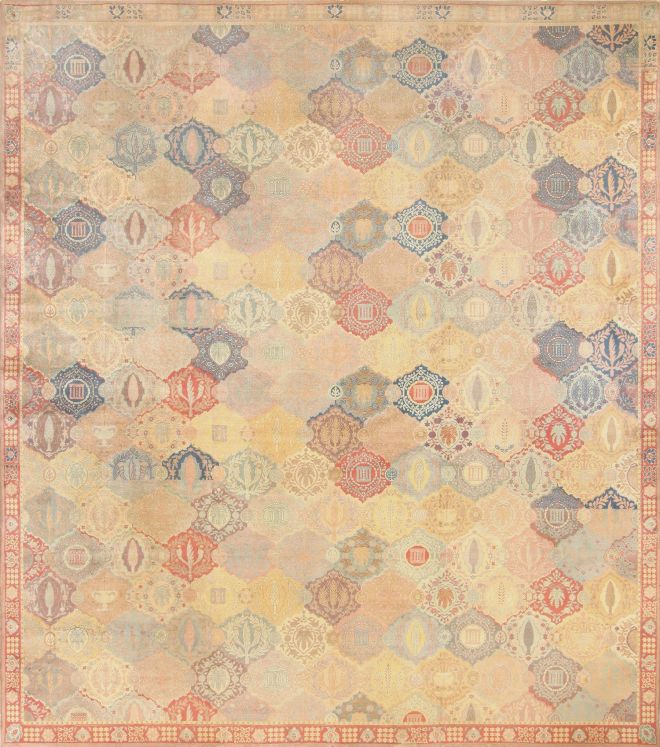 When art is the subject, and art and Judaism, it’s time to retire the Second Commandment and the Golden Calf. Look instead to the concluding chapters of the book of Exodus for a theory of Jewish Art. The first thing to note is that, rhetorically, the description of the Mishkan (Dwelling Place) (Tabernacle) is written in such a way as to deliberately confuse the reader. The reader gets lost, is supposed to get lost in a small infinity of color, metals, woods, stones, woven materials, oil, light, beams, sockets, partitions, screens, loops, curtains, clasps, walls, pins, pillars, cords,. The imagination cannot encompass this mass. That is the point. When I asked students to draw what they read straight from the text, the astute ones focused on particular objects like the Tent or the ark. They were unable to grasp the whole.

But this is only the non-semantic part of the point made by the biblical text. The female and male artisans, including the master artisans Bezalel and Ohliab, are all described in terms of their wisdom (hochmah) and understanding (tevunah) and knowledge (da’at). They are possessed of wise hearts (hahmat lev) (Ex 35, starting at verse 25). Moreover, what gets translated, perhaps accurately by the philologists’ rule, as “devising skillful works would be better translated in terms of the ability to “think thoughts” (laḥshov maḥsavot) (v.32). (This is Hertz’s formulation in a note to Ex. 35:22. The intensive combination of attributes reflecting wisdom, understanding, knowledge, and heart is then reiterated in the opening verses of chapter 36. Throughout these chapters, the key verb is “to make.”

About the peculiar phrase, “the men upon the women (ha’anashim al ha’nashim) in Exodus 35:22 (translated, no doubt correctly as “both men and women,” is interpreted by Ramban, who pays attention to the peculiar phrase in the Hebrew) to to mean, first the women and then the men. He does so on solid philological footing. For his part, Rashi notes about the skill of the embroiders that the women wove the wool right off the backs of the living goats. On women and biblical “house religion,” see this piece here by Elizabeth Willett and, of course, Spinning Fantasies, about women and the Mishnah, by Miriam Peskowitz.

What these chapters in Exodus contain in potential form is a theory of art and a theory of philosophy. Not simple sensation, art is also wisdom, understanding, knowledge, the thinking of thoughts; perhaps in the image of God, male and female. The philosophical takeaway is to insist that ethics and law are not first philosophy, that first philosophy, including first Jewish philosophy, is art and craft, and that there is no philosophy without these,  and they start with women’s work. When I originally posted this post, it was given the title Jewish Art is Jewish Thought. After a little reflection I changed the title to Jewish Art is Feminist Jewish Thought, in order to better stitch the material together. And then I upped the ante and called it Feminist Jewish Philosophy.

Zachary Braiterman is Professor of Religion in the Department of Religion at Syracuse University. His specialization is modern Jewish thought and philosophical aesthetics. http://religion.syr.edu
View all posts by zjb →
This entry was posted in uncategorized and tagged art, Bible, Jewish art, ritual, women. Bookmark the permalink.