What’s modern? What’s archaic? What now? As we begin to enter deeply into this time of epidemic, a lot of “us” are going to be looking at Haredi communities and how they respond to the crisis. The ordinary tendency to distinguish “us” from “them” is only heightened, and for a variety of reasons. These have to do with the utter fascination of the subject matter, the phenomenon of human and Jewish difference, on the one hand, and, on the other hand, our own sense of the public order and public safety that speaks to our own reliance upon and anxieties about good government and modern medical science. And also this. In our contemporary media environment, every action of every individual or collective actor is immediately exposed to spectacle.

About this particular phenomenon, the Plague or Black Wedding, I’m posting this article here by Rokhl Kafrissen and this thread by Nir Hasson from where I grabbed this image of a Black Wedding in Bnei Brak. Both the article and thread include scholarly references and some historical source material.

“However, when it came to the cholera epidemics which stalked the 19th century, the Jews of Eastern Europe developed a unique communal ritual of defense and protection: the cholera wedding. The cholera wedding generally involved finding two of the most marginal residents of the town (whether orphans, beggars, or the physically handicapped) and forcibly marrying them, usually in the cemetery. The cholera wedding, also known as a shvartse khasene (black wedding) or mageyfe khasene (plague wedding) was presented as an ancient Jewish rite, but Meir argues, it was a newly invented, modern response to what was then a newly arrived disease. Because it was a late-developing belief and not textually based, the mechanism by which it was believed to work is open to interpretation.”

On Plague Weddings now in Israel, see this article here from Kikar Ha’Shabbat 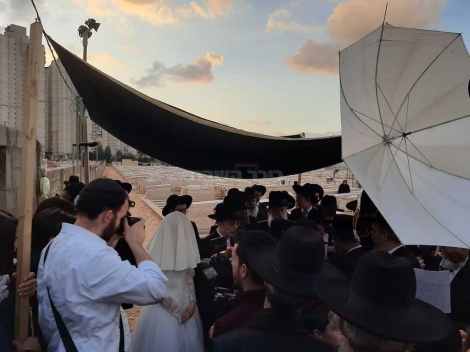