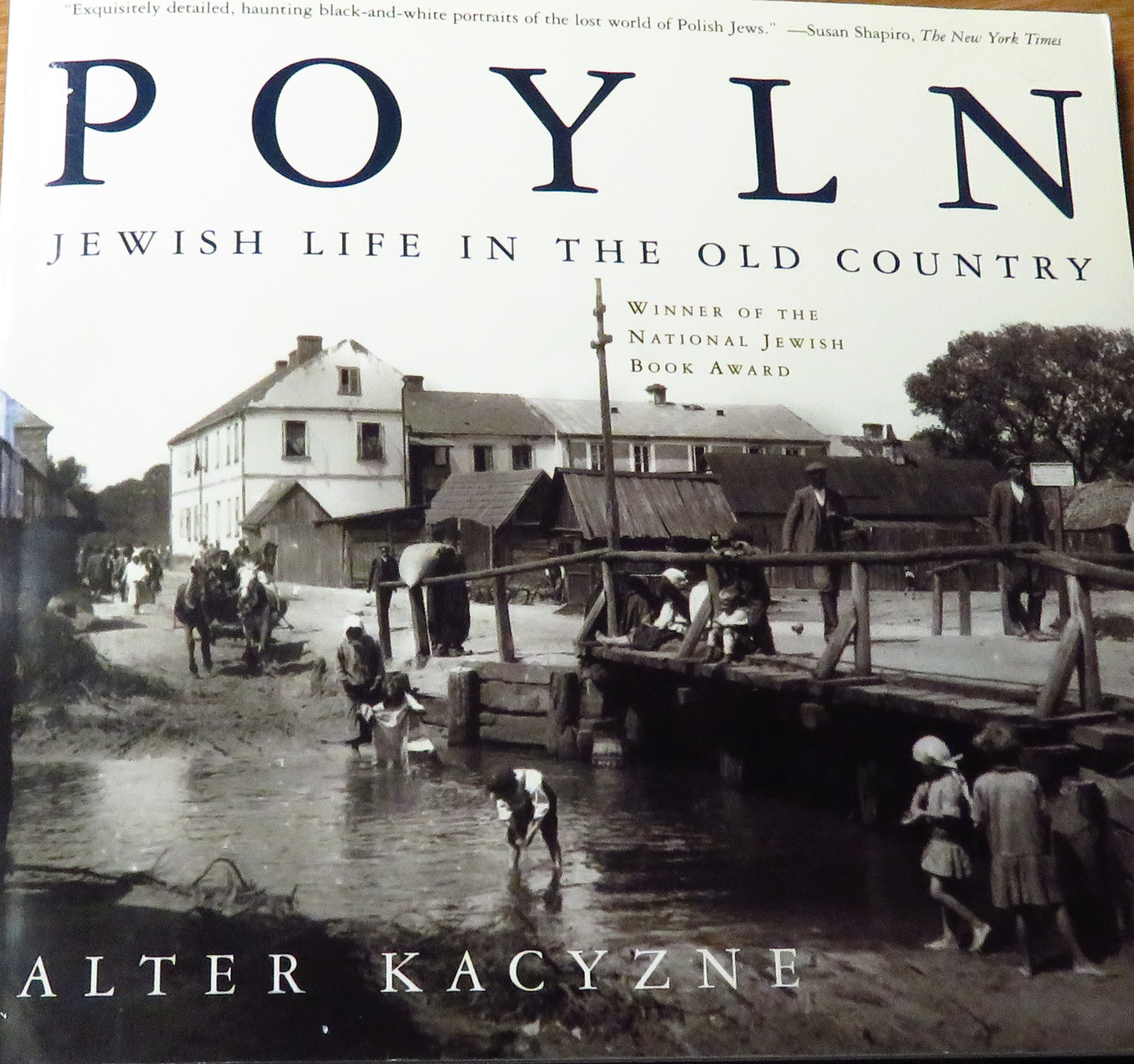 What are we looking at when we look at photographs by Alter Kacyzne of Jewish life in interwar Poland and then reproduced in the 1999 photo-album Poyln: Jewish Life in the Old Country? With what kind of affect? There are other collections like this –the 1987 Image before My Eyes collected by Lucjan Dobroszycki, and of course the photographic reliquary from the late 1930s, just before the war, A Vanished World by Roman VIshnaic, published in 1947 and then republished in 1983. Neither not vanished nor preserved in amber, this world and these Jews are very much alive in this body of work.

To get a sense of these photographs I went to the chapter on him and Moshe Vorobeichic in Carol Zemel’s Looking Jewish: Visual Culture and Modern Diaspora. Zemel describes her own book as being about “image production as a signifying practice of Jewish diasporic life” (p.4). Zemel includes chapters on Bruno Schultz, Vishnaic, R.B. Kitay, Ben Katchor, and Vera Frenkel.
.
What are these pictures about? Zemel argues against what Michael Andre Bernstein called “backshadowing.” Looked at in their own terms, the images have no direct relation to Auschwitz. Zemel sets aside the sense of impending doom that readers come to these kinds of artifacts after the Holocaust (pp.20-1). What I would only add to this is that, photographs are about time, but not just about time. What stands out in the photographs by Kacyzne is the tension between social motion and social stasis in relation to place. These photographic subjects (objects?) are etched individual figures out of a collectivist social mass. The people are more ordinary and actual than iconic.

About the origin of this body of photographic work, Zemel explains, “From 1923 to 1930, Cahan commissioned Kacyzne to provide images of Eastern European Jewish life for the weekly rotogravure or ‘Art Section’ of the paper; they appeared there as photo essays with titles like ‘The Principal Streets of Grodno, Poland’ (December 30, 1923) or ‘Pictures of Jewish Life and Characters’ (December 5, 1923) (figure 1.8). In an ongoing exchange of letters, Cahan and Kacyzne voiced the differences in their outlook. For Cahan, who described the photo essays as contributions from ‘our traveling photographer,’ and ‘our special artist photographer,’ and who encouraged representation of shtetl types and habits, the pictures enabled the conjoining of two diasporas—the Eastern European and the American—with the distinct impression that the pictured conditions of the old country meant it was better ‘over here.’ Kacyzne, seems to have agreed, at least in part, though he complained about the lack of variety in shtetl subjects and Cahan’s lack of interest in his own ideas—both literary and pictorial—for the project. His itinerary, he reminded the Forverts editor, was shaped by his own lecture tours and cultural projects, and as a poster for his lecture on ‘Literature, A National Treasure’ in the background of a picture of Tshortkev (Ukraine) shows, Kacyzne actively promoted modern Jewish nationhood to old-country audiences as well” (p.31).

In short, as Zemel notes, for Cahn, the photographic interest was nostalgia on the part of Yiddish language Jewish immigrants in America, more or less recently arrived. For Kacyzne, it was a changing society that caught his eye. About this contention I am a little unsure. I am not sure I agree with Zemel that the photographs “[differentiate], and [re-vision] the possibility of a new diasporic home” (p.42). Nor am I sure that they are even “diasporic” as theorized in academic diasporist scholarship. These Jews are at once at home in dispersal, but with one foot out the door. But there is nothing to say that these Polish Jews were ambivalent, particularly doubled, or even minoritarian, as per Zemel’s formulation in the introduction to Looking Jewish. Being part of a large social mass, they are Jews very much in their own skin.

About how these photographs look today, already almost a quarter of a century after their original re-publication in 1999 –Zemel notes that unlike the original cheap quality newspaper prints at the Forverts circa 1920s, the lavish, art-book presentation of the fine prints highlights the aesthetic qualities of Kacyzne’s work (p.20). It allows us to view them as such, at a critical distance.

Citing Marxist photo-theorist John Tagg, Zemel points out that the original viewers were “[subject-participants] in the pictured space” (p.30). But what about viewers like ourselves and much younger now approaching these photographs one hundred years or so after their original, non-glossy publication? Bracketing idealism and nostalgia, Zemel comments, “Looking at these images, the viewer is generally aligned with the photographer, as someone separate from but nevertheless interested in the pictured sight” (p.30). Except that we later viewers are non-aligned. Certainly, we today are now longer subject participants.

What Zemel calls the “pictured sight” is a pictured site. In the photographs, Poyln is not dreamy, not timeless, not utopian. Poyln is locative. The photographs come out to us, they emanate from their own distinct place and time. The emanations are then modified and re-modified in their production and production.

What does Poyln “mean” today? What do and what can these photographs signify? In the early 21st century, the photographs are no longer news from back home, no longer just over there and no longer just from a few moments ago. There is, in our own viewing today, a shift from “news” to “art.” The finely finished black and white intensifies the effect of our own looking. What’s interesting is a saturated social weirdness. The photographs are motley and full of life. But they are no longer dirty. They capture no shtetl dirt or leave no schmutz of old newspaper ink on your hands. I think if I showed only the Poyln photographs to my students, what would they see and feel? I’m betting no tug of “nostalgia.” For that I would have to introduce that very concept as an apriori thinking grid. Domesticated, but no longer familiar, the brightly reproduced photographs are both lovely and curious. Is this sort of what Poyln maybe looked like?

Nostalgia has to be lived to be nostalgic. To be honest and speaking personally, my own sense of lived nostalgia would form around the memory of felt object-places like Baltimore and Labor Zionist summer camp circa 1979 and Israel in the 1980s. The basic-group structure of modern Jewish nostalgia remains remarkably consistent. “Once upon a time there we were all together and it felt like this.” But if Zemel would allow me, I would say that, today, about Europe and about Poland, Jews are both post-nostalgic and post-diasporic. Jews are no longer there and not for a long time already, not actually.

Zachary Braiterman is Professor of Religion in the Department of Religion at Syracuse University. His specialization is modern Jewish thought and philosophical aesthetics. http://religion.syr.edu
View all posts by zjb →
This entry was posted in uncategorized and tagged Ashkenaz, photography. Bookmark the permalink.