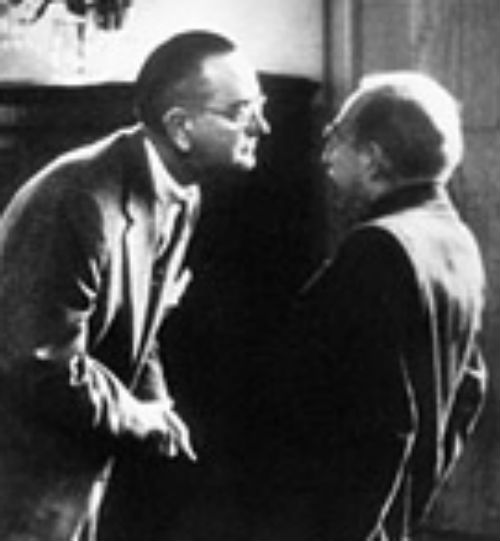 Didn’t Maimonides say something somewhere about political leadership and tall people? Be that as it may, this is what “the political” looks like. Forget friends, enemies, Carl Schmitt, and all that fascist stuff, or all that claptrap he wrote about the failure of liberal democracies to decide the state of exception. Look here instead for the aggressive art and force of persuasion in a liberal democracy.

I tracked down this image afer reading an interesting article by Richard Cohen in the Washington Post “What Obama Doesn’t Know about Being President.” Maybe Cohen’s right and maybe he’s  wrong, but I  like how Cohen’s piece compares Obama’s cold, aloof style to the jaw-jaw perfected by LBJ. The link provides background to the encounter between then Senate Majority Leader LBJ and one Senator Theodore Green.

Zachary Braiterman is Professor of Religion in the Department of Religion at Syracuse University. His specialization is modern Jewish thought and philosophical aesthetics. http://religion.syr.edu
View all posts by zjb →
This entry was posted in uncategorized and tagged liberalism, politics. Bookmark the permalink.