World, Art, and the Spiritual in Art (the New York Times)

I came to art and music kind of late, in my mid 30s, to address a set of problems in 20th c. Jewish philosophy. I was pointed to Bauhaus, where I stumbled upon Kandinsky, Klee, and then Franz Marc, and then discovered Mahler and Schoenberg. (I still don’t care for 19th romantic music.) I’m not embarrassed to say that a lot of what I understand I’ve learned from reading the art and music critics at the New York Times.

What I like about art is the bigness of  world. What I like about the NYT is how that bigness of world can get compressed into the pages a newspaper. Sometimes on a Sunday, there will be a suite of articles that stitch together many of my interests all at once.

This week, there were articles on Schoenberg, the Estonian composer Arvo Pärt, the Jewish artist Deborah Kass, and Arab film. Avant-garde and middle class-bourgeois, cosmopolitan and tribal, spiritual and physical. To me, these values reflect modern religious thought at its best, stitching it to art and aesthetics. 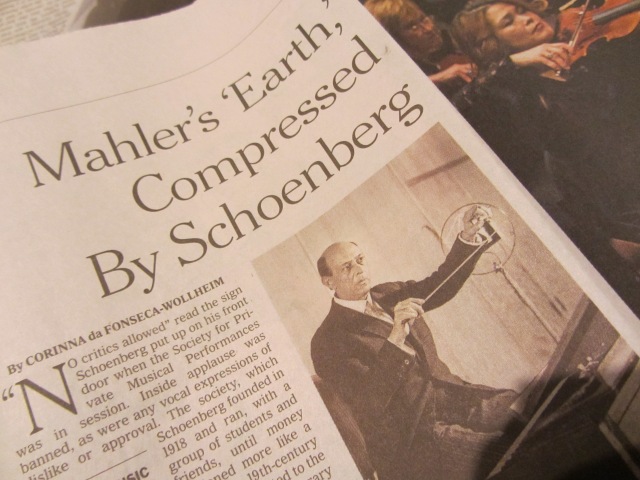 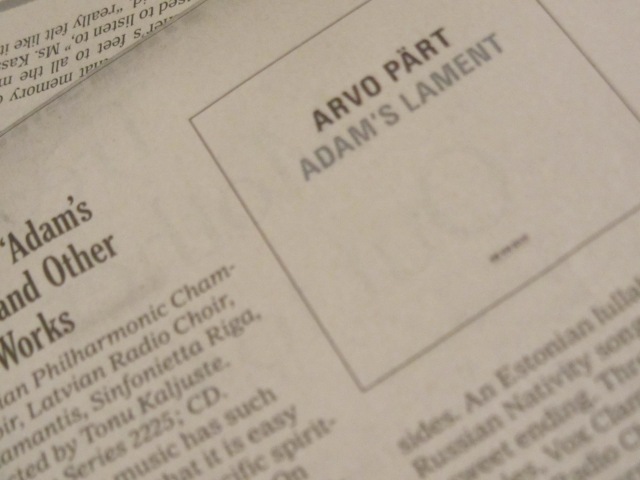 There is a world-weary heaviness to the work, with lumbering chords in the strings, monumental outbursts and abrupt silences.

Ever since, [Deborah Kass] has fully embraced what she distanced herself from in her 20s and 30s: her suburban upbringing, her middle-class Jewish identity, her love of the show tune. “A lot of Broadway has that immigrant narrative of America as a place where you can become something else against all odds,” said Ms. Kass, who began her first Broadway canvas — “Sing Out Louise,” the opening line from “Gypsy” — in 2002, as she turned 50 and was despondent about what she saw as George W. Bush’s assault on the middle class. “Really, I’ve only been striving to get to the middle class all these years.”

The programmers  of an upcoming series on Arab film at the MoMa say they’re trying to show that there’s a conversation going on across geography and generations that may or may not have taken place in reality, Ms. Salti said by phone from Beirut. As an example, she cited the echoes between a 1968 Algerian film and the current work of the Palestinian filmmaker Elia Suleiman, even though “I know for sure that a) he’s never seen the Algerian film and b) never met the director.” She added, “And yet they have a shared history and sensibility and kinship across time and space.”

Zachary Braiterman is Professor of Religion in the Department of Religion at Syracuse University. His specialization is modern Jewish thought and philosophical aesthetics. http://religion.syr.edu
View all posts by zjb →
This entry was posted in uncategorized and tagged aesthetics, art, music, religion. Bookmark the permalink.