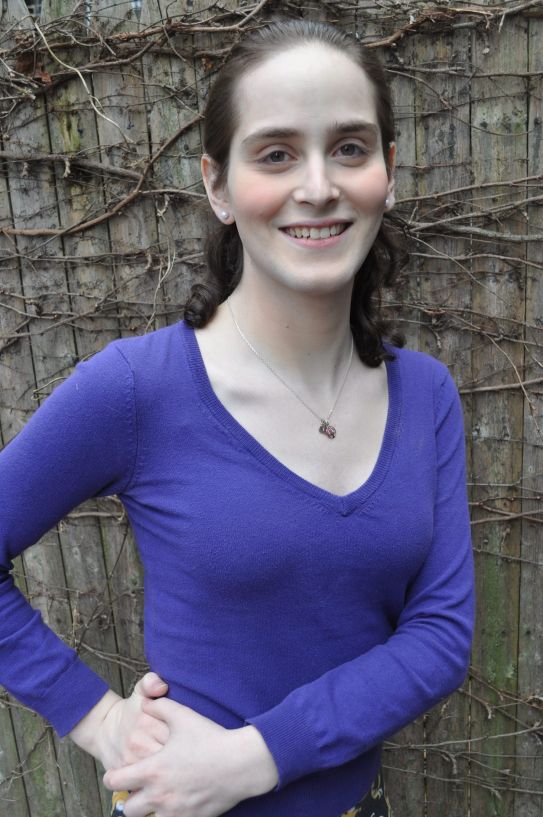 In the depressing and dreary state of our political world in the Age of Trump, this is a touching and lovely life-affirming story about the power of transformation and self-creation. For those who can’t get behind the Ha’aretz paywall here I’m posting below the piece by Debra Nussbaum Cohen about Abby Stein, who was born and ordained as a Hasidic rabbi and then transitioned from male to female, leaving her community to find new cultural and spiritual connections.

NEW YORK – Abby Stein is almost certainly the only ordained Hasidic rabbi who is also a woman. Stein wasn’t female when ordained, of course. She was a young man, soon to be married to a woman also from the strict Satmar community in which they were both raised.

While Stein – then named Yisroel and nicknamed Srully – had long had unsettling feelings about her gender identity, when she married at age 18 in Williamsburg, Brooklyn and moved to Monsey, she had no idea that just a few years later her life would be radically different.

But it is. Today Stein, 25, is a Columbia University student, divorced, no longer ultra-Orthodox – and female.

Abby, as she is now known, is a petite young woman with shoulder-length brown hair, whose religious origins are detectable only in the Yiddish accent and cadence of her speech. Estrogen has made her face softer and her body more womanly, and has even induced PMS-like mood swings.

Abby Stein today after undergoing gender transitioning, leaving the religious world, getting a divorce and becoming a student at Columbia University. Debra Nussbaum Cohen
She is happier than she has ever been and plans to work on transgender issues in public policy. She may even one day run for local public office.

The sixth of 13 children, Stein was her parents’ first son. It was an upbringing full of cousins, weddings and Shabbos tisches (Friday night community gatherings) with the rebbe. Her father is related in five different ways to the Baal Shem Tov, the mystical 18th-century rabbi and founder of Hasidism. As such, the family has customs that reflect its status. While in strict Hasidic communities women don’t drive, Stein men don’t either. They don’t eat in restaurants and work only in Jewish education. After bar mitzvah the boys wear white knee socks rather than black ones — something most Satmar men do only after marriage.

When young Stein questioned her father about why they didn’t go to amusement parks during the Passover and Sukkot festivals like most Hasidim, he would respond that those things were “pas nisht” — simply “not done” – by Steins.

Something nagged at the little boy from an early age, although she lacked the language to describe it. In the bathtub at age 4, she’d prick her penis with pins because, as Stein tells Haaretz now, “It just felt like it didn’t belong there. I realized right away that I couldn’t tell anyone.”

She voraciously read articles about organ transplant from Yiddish language newspapers Der Yid and HaMaspik, thinking “someday I’ll get a full-body transplant.” At age 11, Stein added a personal prayer to her bedtime recitation of the daily Shema (confession of faith) prayer: to wake up a girl.

At 15 Stein went to a high-school yeshiva of the Vizhnitz Hasidic community in upstate New York. One day a classmate gave her a Hebrew-language translation of Richard Friedman’s “Who Wrote the Bible?” That led Stein to read “The God Delusion” by atheist Richard Dawkins, and to the discovery in the yeshiva library of books by Rabbi Yitzhak Moshe Erlanger, a scholar of kabbalah, Jewish mysticism.

Students at the yeshiva typically returned home one weekend a month, and Erlanger was in Williamsburg one Shabbat when Stein was there. They spoke for hours and the rabbi gave her an important work about kabbalah to read. “For the first time,” Stein recalls now,

“I realized that gender could be fluid.”

At 17, Stein’s parents conducted the requisite research for a girl recommended by a shadchan (matchmaker) and the two met for a b’show at the girl’s married sister’s apartment. While theoretically either of them could have declined the match, when the prospective groom arrived the table was already set to celebrate their engagement.
“It’s extremely taboo” to turn down such a match, similar to breaking an engagement in the non-ultra-Orthodox world, says Stein.

The bride called Stein’s mother every week, but Stein herself had no contact with the bride during the year leading up to their wedding. The night before the chuppah, she went to the rebbe’s son for marital instruction. She was told they were to have sex only on Friday and Tuesday nights, after midnight, in the dark and in one position. Gender identity doubts persisted, Stein says, but “I kept telling myself everything would be fine.”

They lived in Monsey and were soon expecting a child. Stein’s feelings rose up anew, she says. “Gender began punching me in the face.”
Stein got her hands on a smartphone and, in the bathroom at a mall, began her search. “The first thing I Googled was boy turning into a girl. Then I found a Hebrew Wikipedia page about transgender. I couldn’t read English” (Yiddish is the predominant language among the Satmar sect and in its schools).

She also found an online Israeli forum for trans people. “I realized, ‘Wow, there’s a whole world out there’ and that freaked me out,” says Stein. This was before Caitlyn Jenner and the television show “Transparent,” when there was relatively open, public conversation about trans people.

The couple’s son, Duvid, was born in January 2012; a year later, Stein told her wife that she was a non-believer. They talked about leaving Satmar for a more modern community because “we were still trying to make it work.”

Eventually Stein and her wife separated. She worked in Williamsburg and lived with her parents, with whom she was still close; her wife lived with Duvid at her parents’. At first father and son saw each other weekly, until the wife’s parents decided they could not meet unless their daughter was granted a get, a divorce, and Stein promised not to change her appearance and agreed to see the child just once a month.

After enrolling in a college-preparation program offered by Columbia University, Stein started spending time at the Hillel Jewish students’ organization on campus, and later applied to the school at Columbia designed for students from non-traditional backgrounds. On her application, which required a lengthy essay, she wrote simply, “I grew up in New York City but until I was 20, I never saw a movie, went to a Broadway show or listened to music” – and was accepted.

Once immersed in studies, Stein hoped her gender identity issues would fade, but several weeks into her first semester depression hit hard; she couldn’t get out of bed. A counselor at the university said he thought the student was hiding something.

Yisroel “Srully” Stein, before coming out as a trans woman named Abby. She is happier than she has ever been before, she says today. Eve Singer
By then she had begun using women’s deodorant and letting her hair grow, but wasn’t yet ready to confront gender transitioning head-on. The depression intensified and she looked for a new therapist. At the LGBT center in lower Manhattan, a staffer told Stein she was trans. After working at a Jewish camp that summer, she began to transition.
Stein began taking estrogen and a testosterone blocker in September 2015, and started coming out to friends. One showed up with a bag of women’s clothes, another taught her how to apply makeup. She began going to trans support groups.

Stein still dressed outwardly as male though “emotionally it was getting harder” not to make the full transition. She wanted to tell her parents personally about her decision so they didn’t hear it through gossip. One Shabbat, back at home, Stein says she lit candles — solely a woman’s ritual — which she had been doing privately for a year.

“My mother said, ‘You look different,” says Stein, but didn’t ask any specific questions.
Taking estrogen has changed Stein, in the interim. A receding hairline has filled in and her hair has grown thicker. Her cheekbones have become fuller, she has breasts and her hips have widened. Her son Duvid, now 5, started calling her “Mama” as soon as she got her ears pierced, she says.

Stein started attending Romemu, a Jewish Renewal, egalitarian Jewish congregation in Manhattan, and became close to its rabbi, David Ingber. He offered to speak with Stein’s father, and they met in late 2015.

“It was the first time [my father] saw me wearing earrings. He said, ‘It would be easier for me to talk to you while you’re wearing a kippah,’” Stein recalls.

Yisroel Stein with his son Duvid and his parents. After Yisroel became Abby, a trans woman, she was called “Mama” by Duvid when she got her ears pierced. Abby Stein
Her father, who runs a Williamsburg yeshiva for troubled youth, didn’t say much.
“He stayed frozen,” Stein says. “He said, ‘I don’t believe it [transgender] exists.’ I showed him kabbalistic and Hasidic ideas. He said, ‘Why would you do that – women are so much less than men?’ Then he said, ‘You know this means I probably can’t talk to you ever again.’ He stood up, thanked David for taking care of me. He didn’t say goodbye to me, he just walked out the door.”

Her parents have not spoken with her since. Stein called home before the Jewish New Year last fall but got no response from her mother, who answered the phone. “It is painful,” says Stein, who likes baking challah her mother’s way.

Stein had her name legally changed from Yisroel to Abby Chava. Now her birth certificate, driver’s license and school ID indicate that she is female. In an emergency room recently after being hit by a car, a doctor asked when her last menstrual period was.
Stein and her ex-wife haven’t spoken directly since their divorce. The woman’s new husband turns Duvid over when Stein comes to pick him up.

Today Stein wears a triangle charm necklace. Two corners bear symbols for male and female, while the third indicates transgender. She is dating a woman. And she is on a waiting list for sexual reassignment surgery.

At Columbia she’s majoring in political science, and women’s and gender studies. She teaches Hebrew school at Romemu and at the Congregation B’nai Jeshurun, and recently started a part-time community engagement job at the Manhattan borough president’s office.

Stein is also writing a memoir, and someone is making a documentary about her. As the only Hasid in America to come out publicly as transgender, she is in great demand as a speaker from Limmud Jewish education organization, to college and LGBTQ groups. She also runs an online support group for Hasidic trans people.

Most importantly, Stein notes now, she has never felt better.

“I experienced cycles of depression since I was 12,” she says. “Now I have mood swings, but I can deal with that by watching Netflix and eating pickles.”

Zachary Braiterman is Professor of Religion in the Department of Religion at Syracuse University. His specialization is modern Jewish thought and philosophical aesthetics. http://religion.syr.edu
View all posts by zjb →
This entry was posted in uncategorized and tagged American Judaism, gender, Judaism. Bookmark the permalink.