Rise and Resist. Because of people like Therese Patricia Okoumou, this is why I love this country. Here’s the story and video at the New York Post.  “The unidentified daredevil took Lady Liberty at around 3:33 p.m. and then toyed with police for the next three hours before she was corralled under the statue’s giant right foot. Helicopter footage showed her lounging around, waving her protest shirt — which also said ‘Trump Care Makes Us Sick’ — and at one point, laying on her side on the ledge about 20-30 feet above the base.” 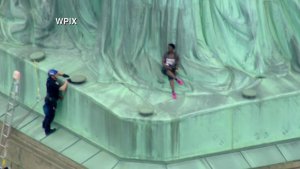