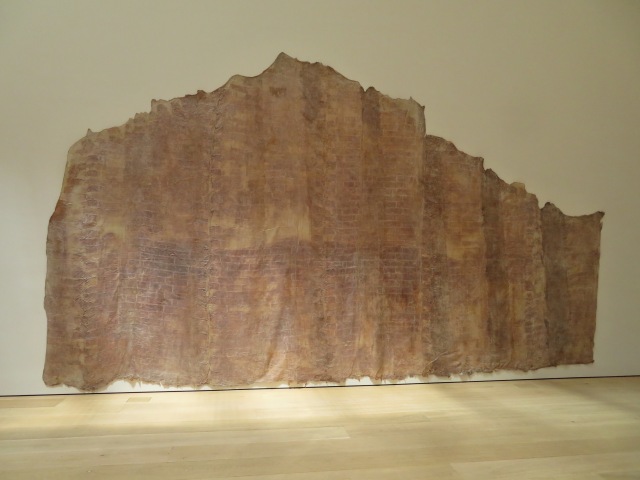 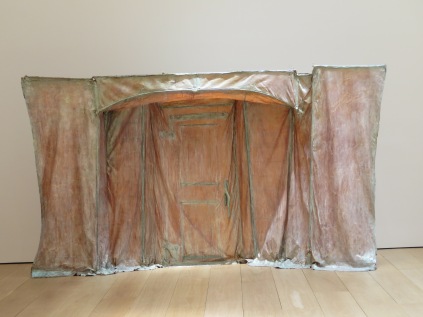 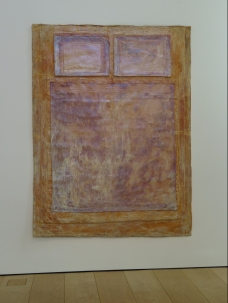 The Site of Memory, an exhibition of works by Heidi Bucher (1926-1993) caught my attention this past week. Active in the 1970s and 1980s, Bucher created weird architectural skins. The press release from Lehman Maupin where I saw these works refers to them as sculptures, but they also look like paintings, particularly given their flat shape. The works are an index to physical sites and objects; they carry their impression.(Other works by Bucher meant to hang in the air have a more clearly sculptural sensibility. Alas, none of these were on view at Lehman Maupin)

An artist who fell into obscurity after her death, Bucher is today mostly known for work in which she covered architectural surfaces such as walls, windows, doors, and entire buildings with latex which she then peeled off and treated with mother of pearl pigment. The press release tells us that she called them “skinnings” or “moultings,” and that they hold elements of paint, rust, and dirt. There is maybe something animal about them. The press release leaves unexplained the mother of pearl, which I would suggest adds a special sheen to the skin. The textile adds a quality of softness. Original architectural details are preserved, a memory trace of the architectural objects from they were removed and which no longer “are” in view.

As I am reading these works (reading in the wake of Aristotle and Irigaray), Bucher’s work sustains notions of “place” by drawing attention to the sense of the place that is separate from but which contains or holds an architectural structure in space. The object once nestled in that place no longer “is” given to hand. The skins thereby encourage the notion that the sense of a place has the potential to peel off from its original physical site and to transfer to another physical site. This includes the capacity by which the sense of place might transfer from an actual physical site to a mental or psychic form of attentive dwelling. Imbued with possibility, the sense of place is not necessarily site specific. The idea is that the skin of the original site might continue to maintain a hold in the world in abstentia, in the absence of the original structure.

One might want to maintain a more neat division between architecture and sculpture. No longer “architectural,” these works are sculptural and enjoy a more compelling freedom as such, divorced from origin and use-function.

As grist for a particular form of Jewish philosophical speculation, it might be the case that something like this happens to the site of the Jerusalem Temple, the skin of which  has been removed from its physical site. A sense of that once actual place in which the objects and ideas that it once contained in situ transfers from an actual physical into the mind of the Mishnah and Bavli; there it begins to operate virtually, as does Jewishness. It’s here that Bucher’s use of mother of pearl comes into play by providing special, animating luster to the “object” once removed and removed again. In terms of their look, a lot also depends upon the light in which these objects are set.