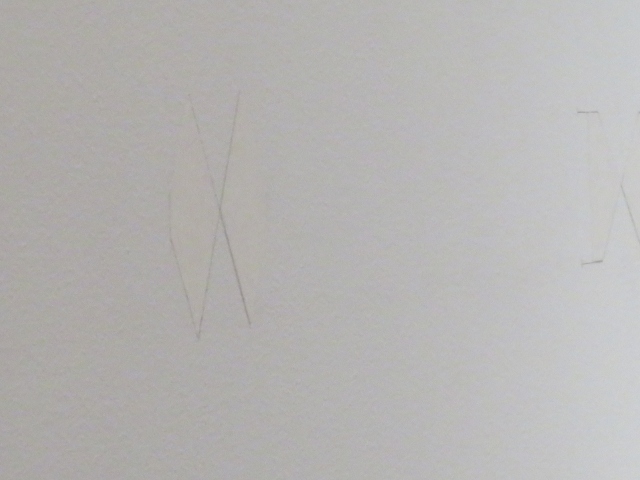 About these images, one could create a spiritual allegory about the appearance of the presence of a god in the world. The Rome Pieces by Ricard Tuttle are discrete little things. The humble mark made of graphite lines and cut and pasted paper disappears into the wall. I’m posting two sets of digital photos here. The first gives each image its own due and focus. In the second image, I stepped back to try to capture a point where the mark begins to appear on the surface of the wall into which it is blended. Archived here, this catalogue essay by Marcia Tucker says so much about so little. If all of our work and all our thinking could be so subtle.

About Tuttle and the Rome Pieces, Tucker writes,

Tuttle’s own attitudes are refreshingly anomalous in an era when art means business. For him, an essential level of his work is that of “investigation.” He is often surprised by the changes that take place in a piece upon completion or when an old work is installed in a new location. He is reluctant to make comparative judgments about the quality of his own work, because he finds that each piece is “self-sufficient,” having its own necessity for being. One key to the peculiar look of the work is that Tuttle has always tried “to make something that looks like itself,” that is, to avoid anthropomorphic or naturalistic references. He also avoids polemic in his work, refusing to use the work to deal with art issues per se. That one is led to discuss the work as though it had a mind of its own is a result of Tuttle’s desire to make work that looks “ecstatic, as though the artist had never been there.” Tuttle comments that “if the artist does a piece of real work and we see it, it’s as though we ourselves are doing it.” This exchange between viewer and work has been noted by others: “If we really attain the art object perceptually.” says Norberg-Schulz, “we may get a strange experience of participating.” This directness accounts in part for the “my kid could have done it” response to Tuttle’s work, a response so marked even from the aesthetically sophisticated viewer as to make the childlike aspect of Tuttle’s work one of substantial importance and worth considering. This quality is compounded by the casual, wobbly, tentative look of the lines and forms he uses, and the simplicity and directness of their execution. The instantaneous look of the work, as if each piece had appeared all at once, makes it anomalous to a public which equates the value of the materials used, the amount of time spent in the execution of the piece, and the manual skill of the artist with the value of the art itself.

In this sense, Tuttle’s work is anti-materialistic, transcendental in both intent and affect. According to him, “the work rests at the unconscious level. Bringing it to the conscious level is like resisting its own will.” The sense of quietude that the exhibition elicited in many observers is at the core of the work. It is an interior, almost meditative state in which the boundaries between work and viewer, inside and outside, can be obliterated.

The Rome Pieces, also done in 1975, are equally refined in visual terms, that is they are small and difficult to see because they are composed of paper pasted to the wall, with pencil lines intersecting or underlining them. However the Rome Pieces are more cerebral and analytical, more rigorously diagrammatic in feeling than the lyrical and chromatic Houston Works. They continue Tuttle’s concerns with the interplay of substance and shadow. Of the three works in the Whitney show, the 16th and Nth Rome Pieces (first and second installations, respectively ) have graphite lines drawn on the wall in relation to the pasted paper in such a way as to make the mark and the extraordinarily delicate shadow cast by the thin edge of paper ambiguously interchangeable. In the 16th Rome Piece, a tiny triangle of pasted white paper has a graphite line drawn just along the lower edge of the triangle. In the Nth Rome Piece, two vertical, rectangular pieces of white paper are pasted at their outer edges; where they meet in the center a graphite line is drawn but it is barely visible, if at all, through the slight opening where the pieces of paper are not attached. The 3rd Rome Piece (first installation) differs in that the pencil lines are drawn along four sides of a five-sided paper figure, and when two of them are continued to twice their length, they cross and form an X, suggesting the reiteration of that paper shape on their opposite side. Through precisely measured lines, the ghost of an image is made to appear in the mind’s eye; logic dictates the incomplete poetry of the piece. Whereas the graphite line here suggests the substantive aspect of the piece (i.e., the paper), the substance that does not exist on the other side of the work becomes a ghost image or shadow because it is only implied

Several questions concerning the nature of Turtle’s art, outside its formal aspects, remain to be answered, and these are questions not of what and how, but of why. The most important aspect of Tuttle’s work appears to center on its affective nature, that is, on why work of such apparent simplicity, modesty and casualness is able to create such a strong response. This is not to say that the response to Tuttle’s work is always the same but, if the reactions to the Whitney exhibition are typical, they are never ones of indifference. It seems that the response generally centers on the issue of how the work could do so much with so little. The tiny 10th Rope Piece (second installation), for instance, prompted one observer to remark on its astonishing poignancy and prompted another to steal it. One critic admires Tuttle’s ability to “control an enormous expanse of space with the slightest amount of physicalitv.”  Another complains that “the spectator soon becomes so sensitized to the lilliputian scale and teeny-weeny subtleties of Tuttle’s work that he begins to scrutinize ordinary hairline cracks in the wall.”” It is clear that Tuttle’s work, in order to be seen at all, focuses the viewer’s attention in a particular way, forcing a concentration that alters ones vision not only of the pieces, but of everything around them as well, even to the extent of compelling one to pay attention to the very act of paying attention.

Zachary Braiterman is Professor of Religion in the Department of Religion at Syracuse University. His specialization is modern Jewish thought and philosophical aesthetics. http://religion.syr.edu
View all posts by zjb →
This entry was posted in uncategorized and tagged art, God, Museums & Galleries. Bookmark the permalink.