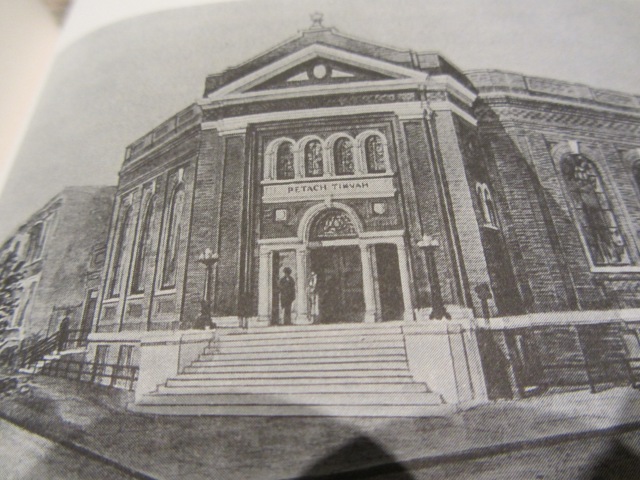 I’m not quite finished reading David Kaufman’s Shul with a Pool, a history of the American synagogue focused on the synagogue-center idea and institution. But I wanted to get to the section of the chapter on “shul” where David writes about the “[interpolation of] Zionist sentiment and symbolism into synagogue life,” “the wholesale conversion of the religious ideology of the synagogue –to Zionism.” The term “Zionist synagogue is David’s (p.197).

You’d think he’s talking about postwar America circa 1967. But it’s already happening in in 1908! Temple Petah Tikvah was built in Brownsville New York in 1915. I’m not sure about the founding dates for “Tel Abiv” in Boston, Am Echad in Waukegan, IL, Chovevei Zion of Springfield, MA, Chevra Chovevei Zion of Harlem, and Herzl Congregation in Seattle, also mentioned by David.

I think this is interesting because the penetration of Zionism into American Jewish life and religion is usually attributed as a response to the 1967 Six Day War. That relatively late date, nearly 100 years after the establishment of the first colonies in Ottoman Palestine,  suggests to critical-theorists such as Judith Butler that the interpenetration of Zionism into the synagogue represents an arbitrary ideological construction. They seek to de-construct that link in order to unplug Judaism from Zionism, to sever the connection.

What David’s study suggests is that deep historical roots connect Zionism to the modernizing Judaism of the East European immigrants to the United States, and that these tendrils go almost as far back as the inception of the Zionist movement in Europe and the First Aliyah circa 1880, 1890.

Writing about a debate between the famous sociologist Horace Kallen and Israel Makransky, David paraphrases the latter who argued that the distinction between Judaism and Zionism is a false one, because in the latter’s view, the purpose of both is sociological, namely to “preserve Jewish life and character.” (p.197). I’m pretty sure I don’t agree with that sociological-functional argument regarding religion. But if “false” is putting things too strongly, then let’s say the distinction is too “slippery” to be of much use.

I’m not sure what all this “necessarily” means. Most likely it can mean many things, one thing to those of us on the right and another thing to those of us on the left. You can use it to stifle dissent about Zionism, or you can use it to argue that the creeping (galloping?) apartheid and religious extremism in Israel is a disaster for American Jews and Judaism. Either way, I don’t think you can inoculate American Judaism from Zionism and from what happens in Israel. The position of  theorists who desperately want to divest Judaism from Israel is undercut by the mere fact that so many of them, so many of us, invest so much time carping about Israel. It’s either a happy or sad truth, that we are still stuck with each other, America to Israel and Israel to Judaism, no matter how attenuated the tie.

My guess it that this has a lot to do with the power of “peoplehood” and “place” in Jewish culture.

Zachary Braiterman is Professor of Religion in the Department of Religion at Syracuse University. His specialization is modern Jewish thought and philosophical aesthetics. http://religion.syr.edu
View all posts by zjb →
This entry was posted in uncategorized and tagged American Judaism, Israel, parks & gardens, politics. Bookmark the permalink.